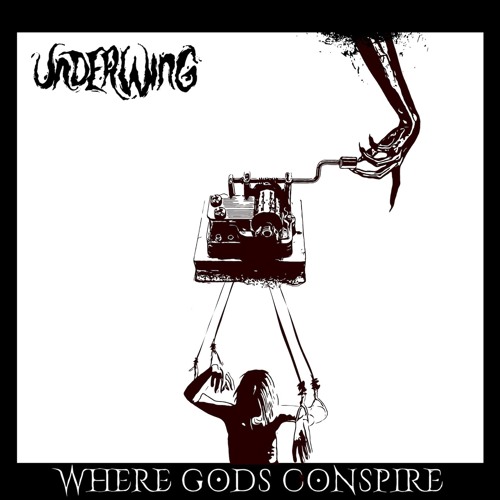 Arendal, Norway is home to five human beings with a penchant for the odd riff. Said odd riff – or more truthfully riffs – are inspired by every ones favourite moody Rock go to, Grunge, alongside other groove laden, heavy yet playful tones warped by a appreciation for Stoner Rock, Metal, Punk and Blues.

Or rather that is a rough synopsis of what you can expect from their 2017 debut Kaela Upsweep. 2017 also saw single ‘I Am The Sun’, where bluesy guitars saw the band at their most melodic, as rhythmic Grunge blended with the cumbersome Heavy Rock of Audioslave. Vocalist Enyeto Kotori is a hybrid of Eddie Vedder of Pearl Jam and the late Chris Cornell and you can’t fault said hybridised emulation of two such legends. But that was ‘I Am The Sun’ and not the 2018 ‘When Gods Conspire’.

The band’s latest single is something of departure on one hand and a continuation of roads only trod in an slight foray into darker, heavier tones on the other. This expeditionary move has become a fully fledged incursion in ‘When Gods Conspire’. The band’s Grunge base is more refined and seamlessly in bed with Punk in the manner of Pearl Jam’s faster material.

But it isn’t just that, a sombre yet weirdly playful and bi-polar lead guitar is cathartically expressing itself and baring all in an emotional performance matching the again stellar vocal work. ‘When Gods Conspire’ builds off this Grunge foundation with a tone nearer to Stoner Rock and it’s cumbersome Metal variant in it’s intro before falling back to it’s Rock sibling. Underwing repeatedly lead you round paths confusing and ever-changing, as the metallic edged Stoner-Grunge tries to fool you into entirely expecting such before fast, unexpected and well executed Punk-Rock tempo sacks the steading and then ebbs away.

This constant chop and change is always in perfect continuity and motions you towards suggesting the band have an air of Progressive Rock or Metal to them, as Underwing are constantly either bluntly and unashamedly transcending genres at you directly as much as they are discreetly and minutely. Perhaps the best example of this is their Grunge foundation being near-almost depleted and replaced with Hard Rock by the tracks end; as if it never existed in the first place. This is made all the more effective with subtly shifting moods ranging from pure melancholy to a warped, weird, wonderful and almost sardonic tones constantly interchanging, confusing but enthralling you until the track’s end.

In short, Underwing will keep you on your toes and with this track being what it is, I have no idea what the next release will yield.