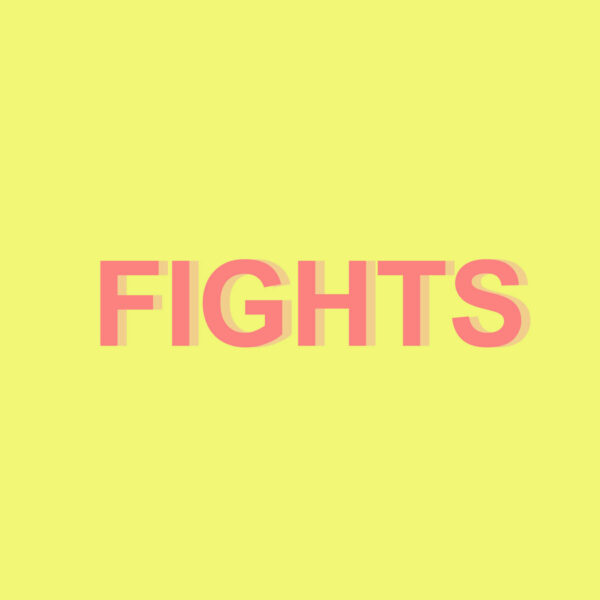 I know what you are thinking and no, I am not about to break into a rendition of ‘Itchy & Scratchy’ but rather discuss Fights and Fights. The former, a band crashing through their early years and the latter the byproduct. The four-piece from Oslo, Norway are yet another band to emerge from what is a resoundingly strong Scandanavian Punk music scene with their stamp on Garage-fuzzed Punk gyrating its way around classic Hardcore.

Characterised by hoarse, cheerfully demonic vocals, over-driven vintage Hardcore rhythms and contrasting melodic edges only existing to show how precision-razor-sharp the band are, Fights are exuberant at the very least. The band are armed with a sense of humour, but you’d be a fool to simply resign them to it.

‘Melk Eller Reker’ (Milk or Shrimp) opens over whatever sample the band have chosen before a maniacal scream. A sharp topical-sniff then follows before a “1,2,3,4” on the sticks. ‘Meth Metal’ tells of a spiralling fall into Meth-addiction. The band soundtrack such with a raw Hardcore Punk still beset with that all-important and intermittent melodic layering. The more ‘Meth Metal’ tells of this abject fall into utter life-fuckery, the band alternate. Fights hold their ‘core vocals steady but push further into a mischievous and adrenalised-Garage Punk. ‘Meth Metal’ may only be track two, but it’s hard not to argue its worth as one of the best the debut.

Fights are another band who push the age-old medium of driven-upbeat Punk-grit while pouring their woes. It’s a tried and tested formula and nothing new but the four-piece’s rendition is flawless. ‘Psympathy’ is a cathartic cry for help in this very vein. Track three releases over a rambunctious stripped-back Garage Punk, complete with warped leads, plenty of “oooooooosssss” and an emphatic truth. People cry for help in a variety of different ways and it might not always be the way you think. Not only is this clearly screamed down the microphone but also through the excellent use of this “happy-but-sad” stylistic. ‘Reker’ (Shrimp) seems to be the chosen comestible and is still beset with a looming, eerie maniacal tone.

‘Wasted Times’ teases momentary Rock n’ Roll before a non-negotiable charge of further abrasive Hardcore. It is here that the band’s energy becomes even more obvious in its indomitability. A positive that is in no small way due to their detouring Shrimp-deviation. Fights’ energetic display isn’t their all though. Despite its strength, their variant of Hardcore Punk is only fully embodied where necessary. ‘Wasted Times’ is the fullest degree that the band push this and it’s a sure-fire contender to dispute the hegemony of ‘Meth Metal’. The track may well be Fight’s ‘core to the fullest degree but it also boasts some of the best backing vocal contrasts of the release. The band’s debut is testament to their need to enjoy themselves, making the contrasting sonic guitar and vocal-grins all the more crucial.

‘Wasted Times’ despite its visceral abrasion, laid some crucial groundwork. ‘Incel Inside’, a track that needs little explanation, takes a playful inner-look at the mind of an incel in a humourous but dangerous fashion. Again, the band make light of it all but there’s always a reality in their words. The closer of Fights furthers the lively hints of ‘Wasted Time’. Six is the band’s most lead-heavy and grinning Garage Rock display as it delves further and further into the unhinged minds of incels. Again, the comparatively heavier aspects of the four-piece are their unequivocal best but they would be doing themselves an utter disservice by side-stepping what they present in track six. ‘Incels Inside’ is a blast of raucous Rock n’ Roll rife with flirtatious guitars, “woo-ooosss” and melodic backing vocals and harmonies that closes Fights the right way.