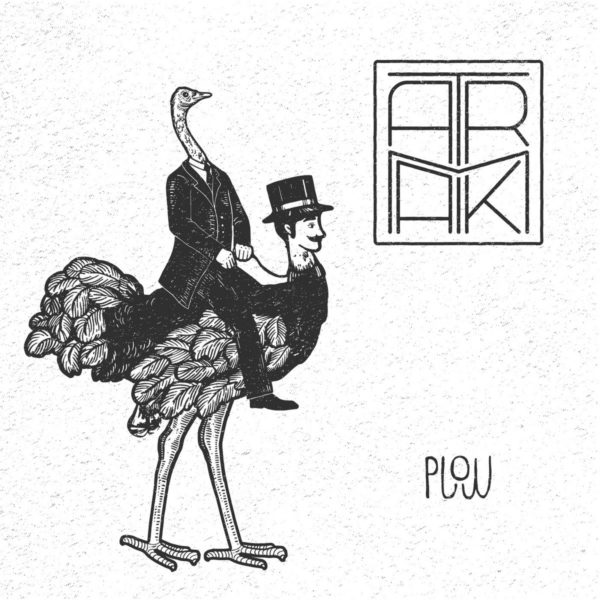 Locked away since 2014 brewing an organised yet jaggedly-unpredictable sound, it is only now that Tarmak and Plow in the year of no real precedent make their play. The Ghent, Belgium based band supposedly began as a three-piece wholeheartedly committed to Acapella Mongolian Throat Singing. However, after ultimately and fatefully deciding that the world simply wasn’t ready, decided to reorganise and delve into the realm of Progressive guitar music, finally sitting down to brew a rich batch of Post-Metal.

Now, often, when the genre of Post-Metal is uttered, referenced or fully embodied, its cousins in Post-Rock and Prog are certainly not far behind. Tarmak and their debut Plow know this all too well and yet, are in seamless control of where these family members appear.

Plow opens with the intense, gyrating ebb of ‘Krater’. Track one gradually encroaches on all in its path, with a bassline alternating from brandishing a vicious claw to letting it hang by the wayside. Tarmak perpetually teases an unabated catharsis but retract such, leaving you on the very edge of being on edge. This is juxtaposed between with 1:31 and 1:47 with a thin, bright sonic-glimmer plucking its way along in dread. Directly after such, the band employ a Post-Rock-esque bridge before thick, metallic chugging accompanies a haunting and rare vocal tone. Enlisting a voicebox within the Post-Metal realm is risky but Tarmak earnestly do what they must.

‘Krater’ pushes on and introduces a warped but ambient atmosphere of uncertainty that taints the record as a whole. Post-‘Krater’, Tarmak embody the latter half of their double-barreled genre moniker. Track one was open, bare and honest and yet, deliberately reserved. ‘Petanque’, compared to its predecessor unleashes its Metal violently. However, as you would expect, there is a contrast. All the while, the soaring-to-warped and back again melodic edge to Tarmak ubiquitously exerts its control. ‘Petanque’ is energetic within the context of the genre. The band alternate aggression, tempo, tone and structure, giving their Post-Metal an appeal to those whose ears are decidedly inclined toward Prog-Metal quirks.

‘Pentanque’ keeps you on your toes. Tarmak follow their blasts of crushing riffage with slow, ebbing, bridges dwelling in the juxtaposing eye-of-the-storm. The band show an adept skill at their craft and in fact more than arguably go beyond such but choose not to focus on gratuitous displays more than they have to. ‘Pentanque’ balances this need, with a natural and organic stripped-back and lumbering simplicity.

If ‘Pentanque’ showcased and championed the Tarmak’s scope as a whole, then ‘Krampus’ refines their experimentation. In a stylistic call back to the relatively reserved nature of ‘Krater’, the 8:10 ‘Krampus’ battles between a Prog-toned variant of such while attempting to contain the spasmodic displays themselves longingly devoted to ‘Pentanque’. ‘Krampus’ to be succinct, comparative and emphatic, is a refinement of the EP thus far. Notably, track three is the least “metal” of the band’s work. The track still has it’s respective spot on the mantle, but with its increasingly melodic display, greater use of lead-lines and Prog-Rock approach, it’s the liqueur variant of the raw spirit. Can you guess what I do for a living?

Tarmak own their jagged, razor-sharp and keenly maintained edges. However, on the contrary, they are a band with no wholehearted resignation. ‘Krampus’ is very much one step in and one step out of the gargantuan laborious action it is named after. Three boasts the best of the band as a whole. Tarmak simplifies in part, but in those parts untouched, allow complexity to reign and in not a single moment, does it feel forced, tentative or unbalanced. The Ghent trio will tire you but never to the point of tedium or exhaustion.

‘Toton’ closes Plow. The manner in which the debut opened and then matured in ‘Pentaque’, arguably suggested a near-all-out assault of cacophonic ISIS-esque Metal. This ferocity is found in part and the associated chaos is both found and satiable to a point. Importantly, however, that isn’t what Tarmak is about. The three-piece capture the weight and danger of the genre as they play on the lip of an altitude dwelling precipice. Furthering this, akin to many in the scene, the band know when to infuse their foundational home with external influence. ‘Toton’ builds on the air of Prog-Rock and Metal Plow has unashamedly flirted with. ‘Toton’ explores Refused-esque Post-Hardcore with cumbersome Hardcore riffs warped by their own progressive successor. The band’s reliance on eerie melodic leads is at its best, all the while, the abject omnipresent Metal endures, never far behind.

Plow intentionally, as a sentient whole, allows us to see its transformation. Track by track, this debut morphs and changes, progressing to its final form. ‘Toton’ is that form. The track encompasses the band’s entire scope, but unlike ‘Petanque’ it does so to the utmost refinement. ‘Toton’ is and true to form, ridden with exciting, addictive and infectious complexity and composes itself to a final, memorable foray between 5:03 and its abrupt self-nullification.