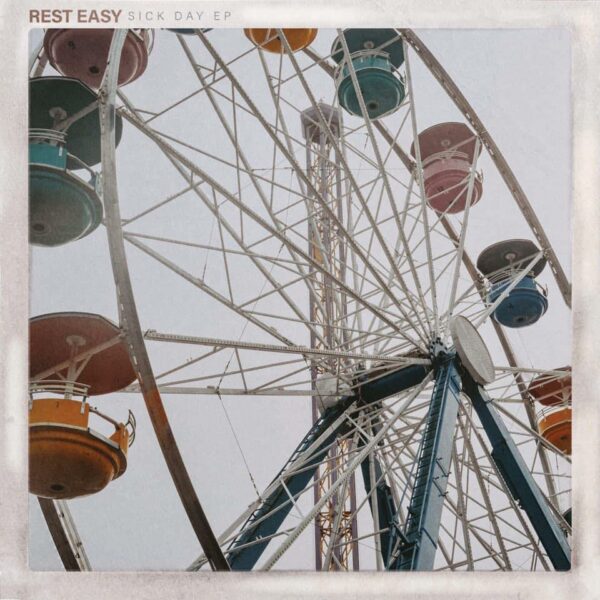 Rest Easy and their Sick Day EP are both a band and debut respectively that live, breathe and champion an intrinsic Punk-Rock comfort. What am I rambling about in the first review I have beaten into this worn-but-not-out keyboard for a good while? Well, expedient expedition is the game, so you’re about to find out. Rest Easy are a band that mainly hail from Vancouver, Canada and are genealogically comprised of names such as Daggermouth, Shook Ones and likely more. Onward.

Good Riddance, No Trigger, Lifetime, Kid Dynamite and Supportive Parents; these are the names that play your cranial stage amongst a combustive concoction of Pop-Punk aware Hardcore, Melodic Hardcore and Skate Punk. ‘Get Busy Dyin’ is this the catalytic opener. Track one will ensnare the fans of Hardcore-centric Good Riddance whilst pushing further toward Rest Easy’s own ‘core foundation. One is a broken-down cry to feel in an environment amidst destabilisation and all Rest Easy want is to watch it crumble. Sick Day is instantly embattled within its own perpetual namesake. ‘Get Busy Dyin’ is nothing but a relentless blast of Skate-core hurtling forth just trying to stay alive. Despite its aggravated tirade, the band then fall into reverberating grooved riffs and marginally reserved vocals simply to hammer the final stroke into the nail.

The sick day continues past twenty-four-hour increments and is sponsored by a few libations and street lights in ‘Headaches’. The double-barreled word that I’m sure ruffled a few feathers earlier now makes its self known. Pop-Punk isn’t a dirty word and its existence has made tracks like ‘Headaches’ stand tall. It may only be a lacquer but the dazey-haze that track two lives amongst applies it carefully. Rest Easy akin to the many of the names above but particularly No Trigger and Lifetime, bare all in an approachable fashion whilst still embodying Punk aggro. Two falls almost fully into Skate Punk but also simultaneously flirts with aspects of Pop and melodic Punk whilst crucially retaining a ubiquitous and comparatively heavier bite.

‘Bad Idea’ was the band’s flagship in this “punk-a-stentialist” debut fleet of four. Pointless nautical pun aside, ‘Bad Idea’ is a masterclass on how approachable “life Punk” can have bite and yet croon with resonation. ‘Bad Idea’ is playful but its point is still a poignant one which is something the video captures insanely well. Musically, again, the band are approachable, rhythmic and jagged as they chugga-chugga their way through self-destruction. Track three is the band at their most reserved and down-tempo and yet it is emphatically their best. To reiterate my initial point, Rest Easy are indisputably comfortable yet still raw and rough around the edges in the best way possible.

Rest Easy openly favour a straightforward assault. The band are refined yet raw and this really shines through the debuts production which was handled by Paul Miner of Death By Stereo fame. The band’s grit is cleverly juxtaposed by their lead which pokes above it all and streamlines their assault only where necessary.

Rest Easy and their Sick Day EP come to a close eponymously. If there’s one thing that the modern age of “wait, what?” has taught us, it’s that mental health is important. The band scream alongside their Lifetime-esque Skate Punk beat that relinquishes to chug-away in the vocal declaration that it’s perfectly fine not to be so.

The band’s pummeling rhythm section is as reliably robust as it has been throughout this debut. Said reliably robust deployment is also in unequivocal equation to the bonafide quality of the songwriting. ‘Sick Day’ seamlessly deviates in tempo without losing a beat or its beckoning interest and though there is nothing overtly complex here, the band are as resoundingly powerful as they tight as fuck. And yes, that is a technical term.

Sick Day is an eight-minute mass of tightly-knit, expertly played cathartically natural Punk-Rock music. Rest Easy confidently straddle more than one facet of their stylistic pool in a seamless multifaceted appeal. This is just the beginning for the band and it’s happening via Mutant League Records digitally and on coloured 7″ vinyl.

Banquet Records in the UK are also stocking it and I know that because that’s where I bought mine. Tasty.