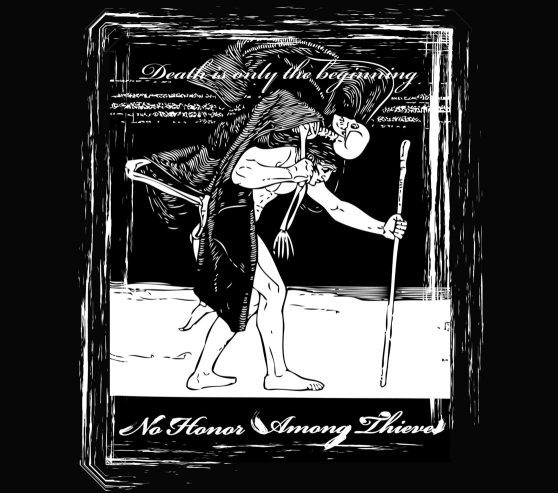 Akin to many huge swathes of noise, No Honor Among Thieves and Death Is Only The Beginning has been a long time coming. I shan’t bother stating the obvious unto why but compile what needn’t be mentioned alongside and in tandem with “being in a DIY band” and you have all the intro pertaining to it easily digestible to you.

The Bristol (USA), Connecticut band have two releases to date outside of this latest one available to public ears. Both Prayers (2014) and Visions (2017) charted a course of amorphous and hybridised Hardcore beset with as many genre deviations in their respective tracklists as they did spasmodic changes in tempo within each singular number. Vicious, frenetic Metallic Hardcore and audibly disjointed yet controlled Post-Hardcore layering prolonged an fierce barrage that has ultimately led to this. No Honor Among Thieves and Death Is Only The Beginning.

Near instantaneously, ‘In Motion’ sets to spooling its engines. The band flex the muscles of their new personnel roster slowly as they proclaim that – ‘Everything went to hell at once, there’s no turning back, there no changing the outcome, it’s time to react’.  ‘Hive Mind’ and its heavy-set, riff-heavy Post-Hardcore then finally allows the band’s melodic guitar work to be properly felt and to contrast. Though more than worth your time, NHAT’s previous work inhibited this crucially placed and contrasting melodic guitar work. ‘Hive Mind’ embodies the unreserved power the band pull from, but also how they contort it into a Hardcore sound they can call their own. In fact, track two, for those new to the band, is arguably quite the showcase.

Though not the fastest, No Honor Among Thieves litter their work with bursts of cathartic pace. ‘When It’s All Said and Done’ teases such before another Post-Hardcore inflexion that does nothing but deepen their sound. From the aforementioned and onward to vivacious Metallic Hardcore, hints of Thrash and a washing of genre classicism, the four-piece coalesce their varied pool of influences. Fans of Death By Stereo and Shai Hulud may well find something here in this anthem of determined survival.

‘Warship’ writhes in metallic complexity and technical stop-starts with the band’s latest addition to the drum seat in complete control. NHAT are definitively for those with a penchant for unabated riffage, though, at times, it can dance on the periphery of being fatiguing. However, in ‘Warship’ and not for the last time, the four-piece know when to either relent, restructure or proliferate the incendiary barrage. ‘Veins’ continues such before alternating into further melodic but no less abrasive drives of progressive Hardcore. Again, with this improvement in production, Vin’s guitar and the band in general can be heard for who they are on Death Is Only The Beginning. ‘Veins’, also and quite notably, ebbs to a close with the band’s penchant for delicate instrumentals.

Early 2000s Melodic Hardcore is the game for ‘Confirm-Conform’. NHAT again break into a streamlined drive as they ponder an ever more corralled, controlled and confused existence. ‘Terror Forming’ matches its pummeling presence to its Thrash-imbued burst as the release underpinning melodic lines meader and intertwine between such pace and the rhythmic punch through Hardcore variables. Whilst ‘Fragments’ laments on the past as James’s contribution to the band continues to prove its worth. ‘Playing With Fire’ sees the band’s most streamlined, classically inclined set of fast Hardcore Punk yet on either side of NYHC’s legacy. Again, though not a canonically “fast-band”, such expedient tenacity is no stranger to NHAT. That said, its increased presence on Death Is Only The Beginning is both satisfying and unequivocally key in breaking from the at times exhausting and domineering Metallic Hardcore.

It is safe to say that ‘Apparitions’ also received this memo as its thunderous rhythm section and frictionless tempo alternation keep you on your toes. That said, I can’t help but feel the band’s burst of adrenaline could have extended for longer but that is simply personal preference. ‘Armor’ then encases you in a winding line lighting the way for yet another NHAT track I would suggest for a showcase.

Though I have not mentioned it as of yet, it is perhaps fruitless to comment on the unyielding fervour of vocalist Steve. There isn’t a second on this fourteen track opus that his evocative and intense display wavers in any way. ‘Inevitable’ then darts between the backbone of breakdowns that lace the record as a whole and a menacingly gyrating groove that comes as quite the standout surprise.

The eponymous ‘Death Is Only The Beginning’ furthers the thematic rebirth the album conveys between its melancholic observations. Here, No Honor Among Thieves, on an album showcasing their heaviest, employ very much that, albeit with short, momentary and targetted refrains from the dirge.

‘Endemic’ in the same way the album rolled in, closes a gargantuan effort from the Connecticut four-piece, one that’s impressive power is a credit to a band being heard as they should be. Its only going to improve from here.