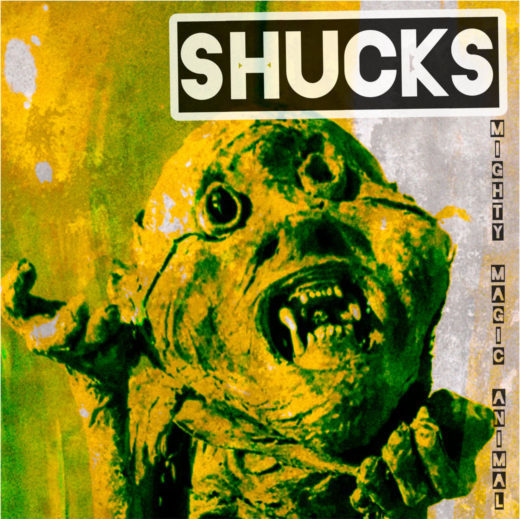 Mighty Magic Animal and Shucks add credit to the statement I made regarding their last EP. Something, something, don’t underestimate a two-piece band. If you want to break-down said release in a little more detail or rather read my own break-down, gyrate over to – Here.

Mighty Magic Animal are a band settled within a cacophony of sound inspired by more influences than you can shake a band-bio at. The two-piece crash through Punk and Proto-Punk alike as much as they infuse attitude-laden Blues and dreary disinterested Grunge in a raucous display of power. Shucks is the band’s second effort at such and begins with its eponymous dirge. ‘Shucks’ lambasts the infamous and complacency risking comfort-zone. The opener is slathered in a thick layer of down-tuned Blues-Rock that couldn’t drag itself across the floor any lower if it wanted to. Which, it clearly does. Post- 1:33 ‘Shucks’ grows frustrated with its may-as-well be brick wall recipient and moves on. Then track then motions towards Grunge without losing the reverberating Blues infected dirge and its fantastic.

‘Teeth’ propagates this further. The tempo becomes the chosen ante to “up” and drives into a marginally less fuzzy but considerably more driven blast of Grunge vocal-led stripped Punk-Rock. ‘Teeth’ is the contender for “choice Cut” status ahead of its time. The second track although in line with this harder Mighty Magic Animal, subtly toasts their prior Rock n’ Roll penchants.

‘Strike Me Down’ and ‘Mudslide’ are but separated by a guitar strap. The former maintains the previous Grunge-disinterest but again sees the band leaning towards their entrenched obsession with Blues-Rock. ‘Strike Me Down’ thankfully staves-off an approaching tedium post 1:33 ahead of its partition. Mighty Magic Animal begin infuse their sound with the natural disdain ala the tracks musings. ‘Mudslide’ introduces itself akin its name and supplements proceedings with a newfound heaviness. Powerful chord progressions are carried begrudgingly by their master over a floor pounded thereafter by thundering skin-beating and existential disdain. The decision to combine these two, it is fair to say, was the correct one.

Mighty Magic Animal build on the blueprint of Guts. The band’s cross-reference of fuzzed abandon on this second release leaves behind much of its playful Garage Rock abrasion in favour of further Grunge aggression. Guts also extends the reach of the former’s Punk influences but admittedly, less than it could have.

Criticism aside, Shucks is a release that clearly took some thought. The band’s lyrical musings are stronger and more impactful and the again newfound dirge only assists that. The band’s Grunge is overarching and welcome and yet it also relents enough for the band’s foundations to ebb in prominently enough. Mighty Magic Animal lace their continuity through Blues-tones that are now rougher round edges that were never smooth in the first place.

This second EP closes with the instrumental ‘Rust’. The finaliser is in short, six-plus minutes of reverb and collated dirge finally exploding from the confines the band had placed it in. ‘Rust’ is an unquestionably good time. Mighty Magic Animal composed such an epic of wall-shaking noise for it serve that very purpose. ‘Rust’ closes an EP that isn’t perfect but is notably far from sub-par.

Shucks is another entry into the chronicle of the two-piece formula. And it’s one you should blast loud enough for the band to hear you from Salisbury.