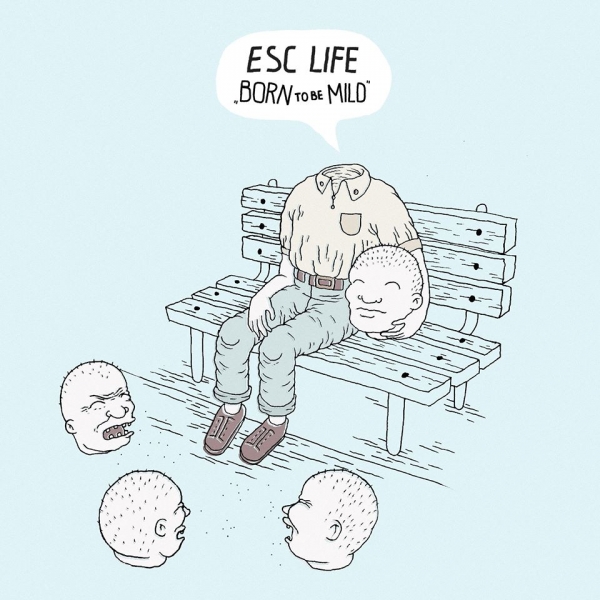 The words ‘ESC Life’ – ‘Born To Be Mild’ are enough to intrigue anyone. Why? Well “ESC” is keyboard-speak for”escape” and with the world “life” in the immediate following, it’s more than likely that introspective songs about life are about to follow.

That is effectively what happened upon pressing play on the 2019 release via Zagreb four-piece, ESC Life. Sat somewhere between gruff-Punk-Rock, and Indie-Rock, the band open their 2019 full-length with the witty 0:03 ‘Intro’ and the words ‘Born to be mild!’. ‘Morning Sickness’ is the true opener however and upon hearing the first few words, was promptly added to this EN house playlist – Here. The track takes a playful sardonic look at not wanting to get up in the morning via a track that can’t decide between Skate Punk, Indie-Punk, and Rock n’ Roll.

‘Close Without Banging’ sounds akin to Chris McCaughan-fronted tracks by the Lawrence Arms as ESC Life continue just to play and sing to and about everyday life, threaded together by a guitar-tone still obsessed with Rock n’ Roll set over mid-paced rocky-Punk.

The Menzingers would be another name to add to the “for fans of” list as you immerse yourself in the playful and endearing nature of ESC Life. ‘Vacation’ isn’t as positive as you might think with yet more dry-witted sardonic delivery. The band isn’t a fan of numbers, especially those with value and the ability to infringe on just about everything.

‘The Worst Cover Band Ever’ teases influence from The Clash in its guitar-tone and lead strings, settling in a slow but playful thud of Rock n’ Roll again akin to said, seminal band. Did you see that coming? No, well its successor returns to a more familiar Indie-Punk supplemented with but a small early 2000’s Pop-Punk penchant. Don’t believe me? See ‘Song Of The Week’.

But what do they have next for you next? ‘Say You Will’ embodies Punk-Rock with a low, rumbling immovable bass and fluttering Indie-Punk drums. To add yet another name to the list of bands ESC Life may well appeal to the fans of, I give you the Burnt Tapes.

The increased sonic-mass breaks in via brash intro before settling back into ESC Life-brand outside influenced Indie-Rock. It’s here that the band’s more-than intelligent lyricism really shines and lands their chosen moniker right in the middle of “Oh that makes sense” territory.

‘Fill The Void’ reaches a level of nihilism that you wouldn’t expect in this vein of Punk-rooted music. But that is only the half of it, the track takes this tone and turns it around into something far more positive via more incredible song-writing and more excellent Indie-Punk-Rock n’ Roll.

In truth, there isn’t a bad song on this full-length. Equal excellence is purveyed by every track, leaving the only criticism being the contrast between tempos per track in the chosen running order. Again though, in truth, it really isn’t that much of an issue when you compare this to how well the rest of Born To Be Mild carries itself.

The band close Born To Be Mild with its eponymous namesake and yet just a little more life advice, closing an album of life songs by a band that lives.