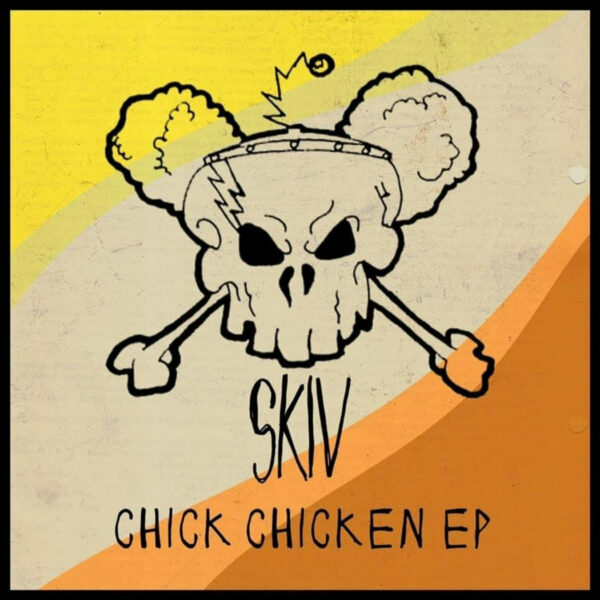 It has been some time in the waiting room but via fledgling label INiiT Records, SKIV and their Chick Chicken EP are here to alleviate your anticipation. SKIV’s four-piece formula of brash but playful and approach Punk is a broad one. The band capture the approachability and intelligent poignant commentary of classic Punk ala The Clash as much as they do the British Indie-Rock flutter. SKIV also simultaneously exude a love for the golden era of both Pop-Punk and ’90s Skate Punk in short sharp increments as they reference noteworthy songs from music history from No Use For A Name to Elton John. This, all of it, is but only relative to their three-track studio flex as it stands. SKIV, are you flexing? *gaduuuushhhhhhh*

Now, however, as is obvious from my near completely superfluous waffle, this flex will soon include SKIV and their Chick Chicken EP. Here be some words ahead of time. To London!

‘Chick Chicken’ is a love story doomed to as much rectal pain as it is heartache. If you are one for meat, perhaps stay away from the brown, sphincter compromising matter that inspired this song. Rife with grinning and then juxtaposing grimacing vocal interplay SKIV’s return is classic, brash, vintage and yet resoundingly fresh. The band’s jabbing rhythms are lined with a slither of Garage Rock n’Roll again comparative to the early days of The Clash while Roy’s quickfire classic Punk drumming sets the pace in an unquestionably tight fashion. SKIV capture a time where Punk exuberance was new as it twisted the lineage of Garage Rock to its more rebellious beat. In this case, of course, SKIV aren’t so serious but in all contrasting seriousness of my own, how could you be to that bouncing bassline.

SKIV trade classicism for melodic and popped-Indie-Punk in ‘Berlinerluft’. There is a polished clarity to SKIV but it is never far from the reach of their inherent grit. Despite a toned-down majority, track two is still brash, raw and frantic in its own way. Backing vocals cut in with a Lawrence Arms-esque urgency matching the lead’s lost, confused yet energised urgency. ‘Berlinerluft’ isn’t without its partners in crime, however. The band’s three-voice boxes aren’t afraid to harmonise and in doing so, the predominately aerated and light lead guitar has a partner.

Track two is very close to classic SKIV. Their streamlined tendencies converse with their raw classic Punk and yet at times ‘Berlinerluft’ feels confused stylistically as it flips spasmodically from Indie-Punk, to classic Punk, onward to Rock n’ Roll flair. However, the contrasting moods of the story being told as it laments, stews and releases allow this criticism to mainly fall to the wayside. Track two is the “good” track but also the grower.

The devil resides in Dartford! That is, according to SKIV. It is here that Chick Chicken begins to make more sense. SKIV have thought about this release and are unashamedly confident. Chick Chicken is abrasive and grins as it departs the band’s previous work more so each time. That’s not to say it’s a complete departure, because it isn’t. This is a band flexibly tied to their roots as a stoic principle. 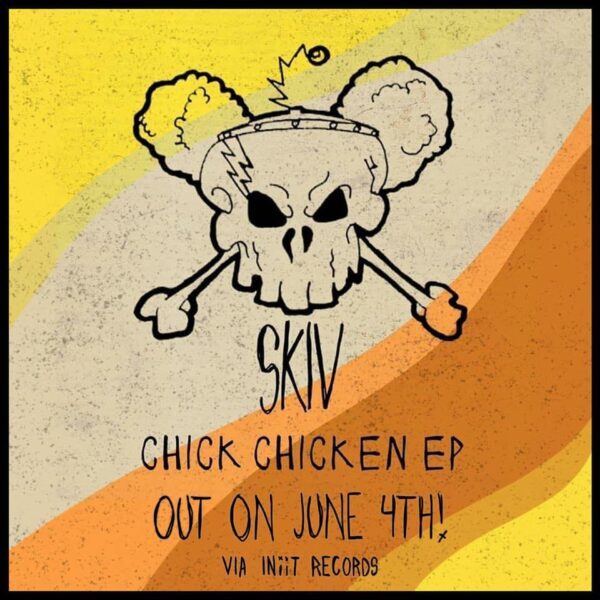 ‘Devil In Dartford’ is a testament to the band’s three-fold vocal duties. Conor’s basslines are buoyant and their guitars meandering and wayfinding. Their quickfire time changes mark a newfound and aggressive bite and although unexpected, interchange uncontested. SKIV employ a heavy set, low-driven Alternative Rock infused with their penchant for Garage-fuzz but also a rhythm section flirting with classic Post-Hardcore. SKIV are no stranger to long refrains and bridges back to what they and we know, but between 2:07 and 2:19 the band’s whirling display rips a newly annexed land-grab into their ownership. Three will solicit a double-take toward either end of opinion but it’s objectively the best of the Chick Chicken flex.

It’s a trip to A&E for the close. SKIV fall back on their exuberant bassline and layered yet stripped back Indie-Punk for the final story. Though the band’s ’90s Punk and Pop-Punk streak is considerably less prevalent on Chick Chicken, it is on ‘A&E’ that it wraps itself around the above most obviously. Once again, SKIV are tied to their previous work. That said, Jordan and Liam’s guitars capture the EPs additions to the SKIV catalogue as much as they do the streak denoted above. This, very subtly, also includes a cheeky smile of an infusion of “guitar-Ska” just because. Track four’s chorus will leave you chanting it back to yourself or in front of the band in good time.

SKIV and their Chick Chicken EP release via INiiT Records very soon. Pre-order – Here. All other Skivilicious info below. INiiT.