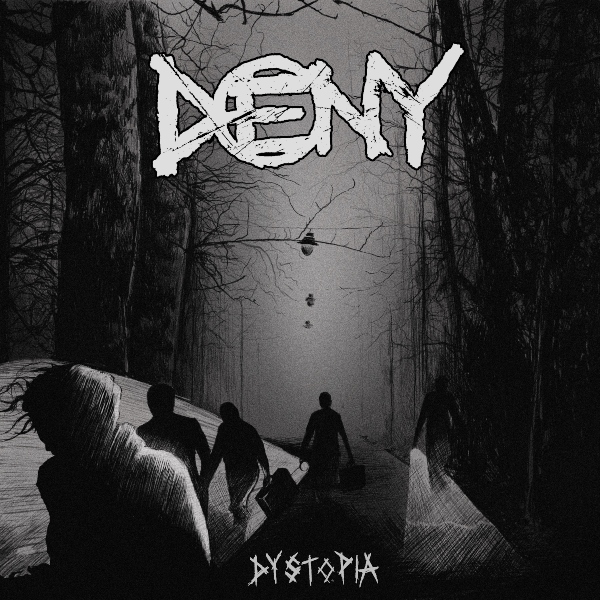 Crust Punk is a derivative form of Hardcore Punk that many find a little ambiguous. However, quite fortuitously, the following words – Deny – Dystopia, may remedy that.

The genre’s foreboding, eerie and cutting yet melodic and warped variant of Hardcore Punk purveys all the rhythmic melody of fast Melodic Hardcore while maintaining the dirge of D-Beat and underground ‘core as a whole. Deny are a band from Sweden who very much fit into this bracket. The band has had a turbulent history stretching back to 1995 via various line-ups but since 2016, they have set themselves more than back on track.

Dystopia opens with ‘Extinction Anthem (Part I)’, where 0:41 via Preachers Of Doomsday eerily begin an album that clearly won’t shy away from stark socio-political commentary. This is followed by the Crust you came for. ‘Dystopia’ is exceptionally fast and set with rough-cut yet clear-enough production, permeated by classic and eerie Crust ‘core guitar tones with a further classic refrain and melodic line threading you through to songs latter half.

Following on from the eponymous number, Deny crash through the relentless ‘Meat Machine’. The track is nothing overly new but adheres to the Crust Punk archetype in a more than satisfactory manner. The band in many ways perfect the melodic elements of the genre that are so successful at pulling in those often ambivalent towards extreme Punk or Hardcore.

‘Powermongers’ is teasing at its introductory slow pace and lead-in by a more subtle melody before catapulting itself and you back to the relentlessness the band lives for. Deny are again leaning towards a more melodic sound as the track and indeed record move on. ‘Powermongers’ and its constant change in pace breaks up the genres tendency to just “go all out” and crash through a record in no time at all.

‘Dishonourably Discharged’ makes more use of these refrains supplemented by sharp and up-tempo break-downs in the perfect setting for the game changer of ‘When She Closes Her Eyes’. Deny are rightfully placed in the Crust Punk camp but much of the instrumentation from the drumbeat, the fills and just about everything musically, carry so much in the way of an appeal to melodic Punk and Hardcore fans that they could arguably be used as a gateway band into this wholly darker realm of Punk-Rock. 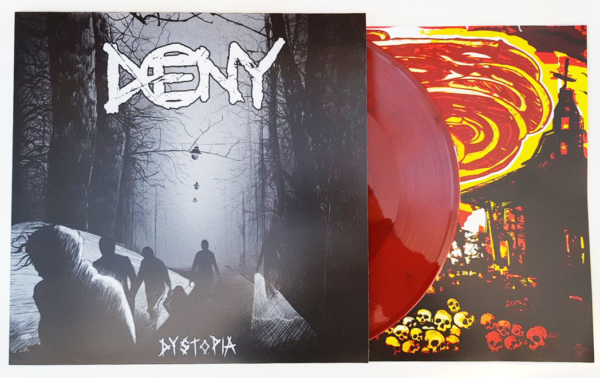 This sixth track slows into D-Beat distortion alongside lumbering rhythms and it’s indispensable to the flow of the album. ‘Never Let Go’ is the fist-pumper of the record and showcases of the best lead-guitar and bass-contrast as of yet and boasts more of the chop and change in pace, which itself only adds to the intensity and catharsis on offer. ‘Frontline’ absolutely shines between 0:47 and 1:02 and ‘Brainwashed’ might well be the most balanced and best on the overall visceral record.

‘Market Of Flesh’ refreshingly moves away from haunting Crust and channels classic ’80s Hardcore and Melodic Hardcore, with Deny’s vocals being the only tie-in to the rest. Dystopia is utterly exhausting and enthralling simultaneously. I won’t pretend that the record will boast huge and overtly idiosyncratic Punk but with the offshoots of Hardcore that the band embodies, they utterly decimate expectation, especially in the second half.

‘Control’ and Profiteer’ provide you with your second wind and ‘Never Again’ your thick and riff-laden third. ‘Extinction Anthem (Part II)’ sees Preachers Of Doomsday close as they opened in a hymn-like tune. 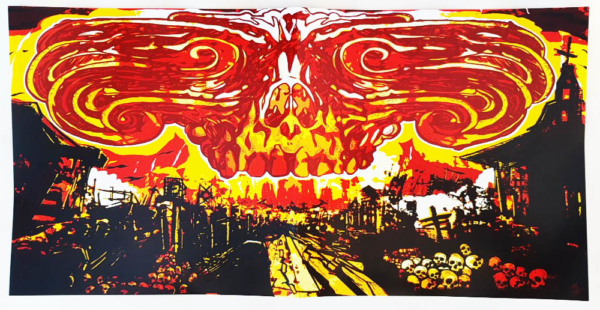 Dystopia is out via Flyktsoda physically on 10/01/20 and digitally distrubuted in all good places via Cramada on 17/01/20.

‘Dystopia’ and ‘Never Let Go’ can be found in our house-Hardcore playlist – Here.