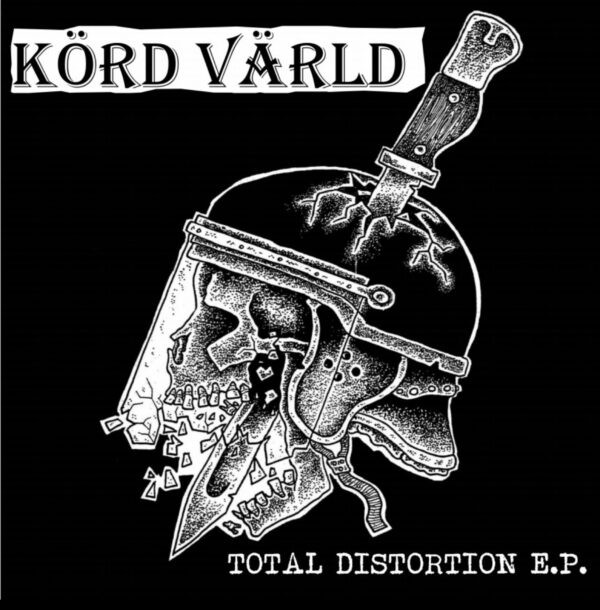 Here we are in 2020.1 and Kibou Records are still on the same release-bender. KÖRD VÄRLD and TOTAL DISTORTION is the latest on this wild ride of seamlessly unending Hardcore that is not only pushing the goals of the label but is simultaneously existing as its very sustenance. That and is also effortlessly bounding onto the plates of other labels as is the Kibou way. Punk, Hardcore and vinyl are integral to the modern diet don’t you know?! Though it is near impossible to cover all of Kibou’s releases due to them appearing quicker than most can blink, you can find all the times the label has appeared on EN – Here.

KÖRD VÄRLD is yet another fledgeling slab of Kibou-core, this time seeing Charlie Claesson (Anti-Cimex, Driller Killer, PI$$ER, Bring The Drones, Knife For An Eye, The Partisans) and James Domestic (The Domestics, PI$$ER, Tokyo, Bring The Drones, CABRO, Hazard Profile) working solely together for the KV debut EP. Regarding this prolific blast hereby dubbed as Kibou-core, KÖRD VÄRLD return to the raw-Hardcore the label and its compadres are known for. In other words, after the unquestionably idiosyncratic PI$$ER, the pair have relinquished the need to dive into the brass-lined unknown. Shall we?

With Charlie Claesson belligerently bounding forth on his archetypical D-beat and Mr Domestic holding down everything else including production, KÖRD VÄRLD treads a key spot amongst the slew of recent Kibou releases. The two-piece sit somewhere between the brash, classic-leaning Hardcore of Tokyo Lungs and the unquestionably raw, raucous ride of CABRO. ‘Paranoid’ opens on drumming sounding akin to what I would imagine their stage-sound to be like, while a teasing yet strained melodic lead spins out of control before being overcome by an up-down-in-your face chord progression. This is within five seconds. ‘Paranoid’ interchanges between this notably higher-toned rhythm and cuts of guitar strings echoing the tracks title in their unsettling prominence. This unstable mental state, manifesting itself in this squealing lead, comes to an absolute head of destabilisation at the tracks shrill end. KÖRD VÄRLD approximately translates as “fucked world”. Need I saw more on track one?

‘Empty Vessel’ clocks in at an impressive 2:26, opening over eerie feedback before falling into a hybrid of Poison Idea, Tokyo Lungs and The Domestics. Each Kibou project approaches its lineage carefully. KÖRD VÄRLD retracts it all into a deep rumbling whole on track two. Though the band are still unrestrained, they are resoundingly more refined and straight running for the most part, which is no surprise considering is bare-all lyricisms. Track two is a “how-to” of underground D-beat and Hardcore with a KÖRD VÄRLD stamp.

The band simply unleash their malaise archetypically but not without just enough of track one’s quirks for good continuity. Post 1:47, although ‘Empty Vessel’ could simply go on and be a good mid-EP filler. Instead, it chooses to alternate and allow the very thin veil of production to inject the returning eerie feedback, as Domestic meaders his guitar around his briefly semi-nihilistic reflective soliloquy before hurtling back into a rage. There is a reason why ‘Empty Vessel’ was the preview of this new project.

The eponymous ‘Total Distortion’ substantiates the very specific sound of KÖRD VÄRLD. Again, those who enjoyed Tokyo Lungs and its own turbo-charged Hardcore will find something here but so will those captivated by many of the vintage and influential Hardcore and D-beat bands. Track three, (B1 technically) retains the low ridden heavy-set rumble of the previous but this time alternates Domestic vocals in a notable, open drift-like echo. Truthfully it is hard to comment too much on Claesson’s drumming as it is as relentless as expected. ‘Total Distortion’ also matches the slightly elevated melodic edge and chord progressions of ‘Paranoid’ in a welcome fashion. KÖRD VÄRLD is a stripped return, yes, but it isn’t without its own idiosyncrasies. 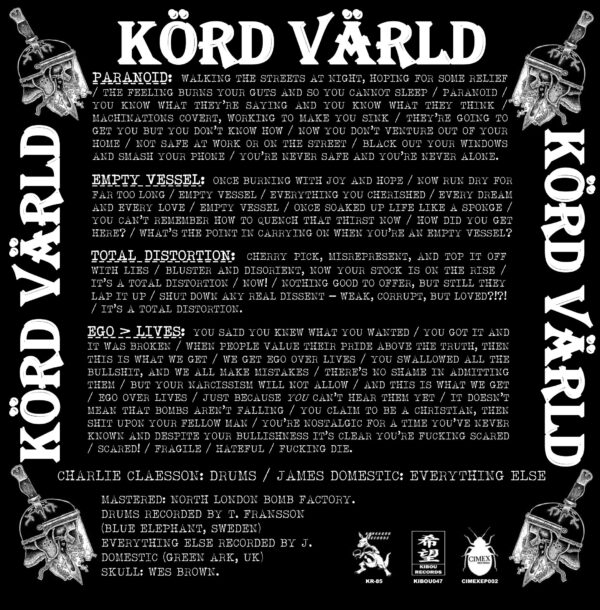 ‘Ego > Lives’ teases the destruction of any speaker it’s played through. KÖRD VÄRLD reaches newfound chaos through Claesson’s beyond adrenalised displays and lighting drum-fills adding a welcome spasmodic jab to proceedings. Domestic’s vocals return to their low, growling-snarl while his bass revels in the hellish landscape the EP paints. Or is that exists within? In a high-velocity nutshell, ‘Ego > Lives’ is a brooding blast of Hardcore that’s mood is nothing but “done with it”.

KÖRD VÄRLD and TOTAL DISTORTION despite its clever subtleties is in many ways no surprise. However, why is that ever a negative when it is composed this well? TOTAL DISTORTION can be pre-ordered below from Kibou Records and will also be available from Cimex Records (Sweden) and Kangaroo Records (France/The Netherlands).