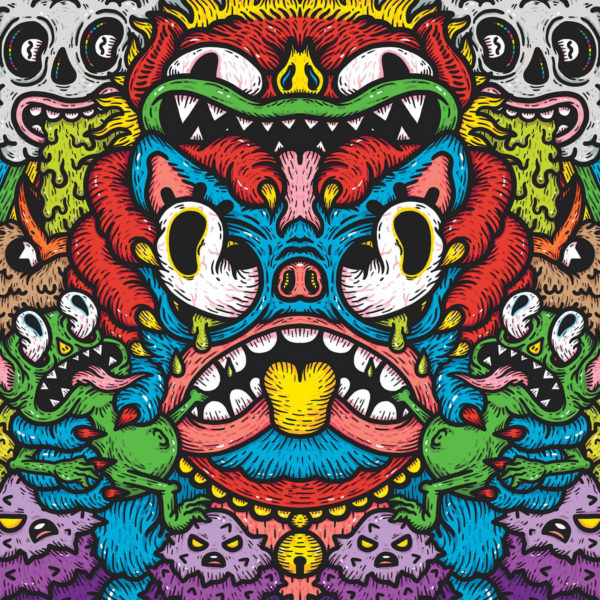 It is said, that Garage Punk-Rock near always yields a good old time. And so, here we are to wonder whether Allergic To Humans and Infinity Crunch further propagate this Punk-Scene maxim. Before we begin, it is important to note that the band hail from Stockholm, Sweden. The Scandinavian nation that has been known for the last thirty years to produce some of the most notable Punk-Rock bands and releases of global renown. The country is also producing a crop of content well worth your time currently within the Punk sphere, so I would recommend doing your research. Oh, and also ABBA. But who really still cares for them?

Likely many! Anyway, moving on. Infinity Crunch opens with a warped melodic guitar-line haphazardly laid over a filthy reverberating groove. ‘Limestone Rock’ is charged with the power of early Hardcore Punk coupled with Proto-Punk and Punk-Rock respectively, all wound together with Rock n’ Roll abandon. ‘Goat DNA’ captures the genre wholly but with a considerable permeation of Rock n’ Roll twang. The good time is already seemingly being had and the energy is hard to deny.

‘A bad smell that we can’t get rid of, it permeates everything around us, cast out from the holes on your body‘ and other stories make up ‘Foul Cosmos’. The track may seem like a witty blast of raucous Garage Punk-Rock n’ Roll’ but through their playful chaos, Allergic To Humans live up to their name. Bad smells, modern life; shit. ‘Uggly Things’ battles the temptation of the status quo and questions whether it’s really worth it. Akin to ‘Uggly Things’, ‘Loathsome Train’ conjures more inventive lyrical imagery as it bounds along in the short, sharp movements of slick jagged double-fuzzed Garage abandon that would become Punk later down the line. The band apply these “down the line” developments into an alluringly playful and indeed punching mass of attitude set either side of an almost psychedelic bridge riding a broodingly low Hardcore-esque bassline.

‘Sect Aura’ was a choice cut set for single status. ‘Sect Aura’ is another soulful blast of stabbing Punk that refuses to lets up its inherent cacophony of Rock and or roll exuberance. ‘I might be meek, but not a chump! I’ll never join your little club!’ – are words passionately launched at the faces of those who deem their company to be outwardly superior. To be succinct, concise and short -Allergic To Humans are their own brash, defiant middle digits.

Upon entering the last four on Infinity Crunch, it becomes apparent how wonderfully coherent this mass of abrasive noise really is. The band’s energy is unleashed, but is sentient in its organisation. Each member of Allergic To Humans is unequivocal in their skill. Allergic To Humans are as refined as they are utterly raw in an excellent oxymoron. ‘No Time’ within the context of the record, tempers this reckless dominance just enough to add some welcome melodic variety – ‘Do you want to own, rule and control?  You better think again’. Anti-authority never sounded quite so forcibly gyration inducing.

‘Spat Out Again’ further plies the grit of Allergic To Humans with notable vocal changes and lower, harder Punk-infusions into the Allergic To Humans arsenal without losing their Garage appeal. Stylistically speaking, the moody ‘Spat Out Again’ is utterly crucial to an excellent, but arguably similar running order. Personally, the records strong consistency is less of an issue for my tastes, though I’d be lying if I said it wouldn’t warrant criticism from some. That said, I will go out on a limb that even then, it would be marginal.

‘The Last Rave’ is a story of devilishness in the realm of dating ala the same humourous repertoire but again, channels a darker more melodic sound that defines the latter half of the debut full-length. Allergic To Humans are the unchallengeable rulers of the danceable bridge and it’s only further bolstered here.

Finally, on an album is no less than exhausting, it all ends via an almost Surf-Rock groove and a symbiotic mass of rumbling percussion, drumming and key slides. ‘The Bastard of From Bjaers’ is instrumental and shockingly closes the album better than any “normal” track ever could.

Allergic To Humans and Infinity Crunch, might be one of the best releases of 2020. Out now via Novoton.