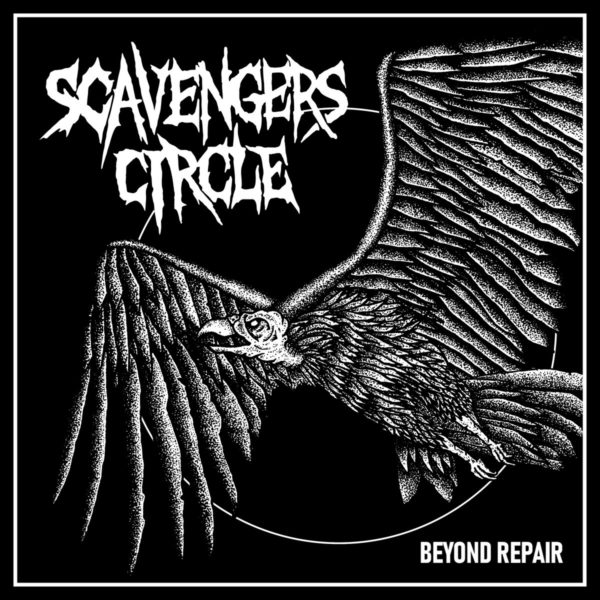 Sweden is a country synonymous with fast and heavy music from crushing Metal to melodic Punk-Rock. Scavengers Circle and Beyond Repair are very much on the fringe of an “in-between” of sorts. The band, or rather the project, is split between two musicians who unleashed their debut this past December via a cachophony of Hardcore Punk, its warped cousin Crust and nods to visceral Thrash.

Crust Punk, despite its moniker, is a Hardcore offshoot that is far more melodic than people realise and that is exactly where ‘Suppression Of Information’ takes you. The melodic end of Fall Of Efrafa, fellow Swedes Deny (who you can read about – Here) and From Ashes Rise come to mind as warped lead-strings ride a reverberating chord progression. Scavengers Circle ode to a vintage sound and its hard to criticise in its successful attention-grab.

Thrash and or Crossover for that matter, is of obvious ancestry to Scavenger Circles’ sound. The band aren’t trying to overtly reinvent the genre and its an unambiguous strength. Admittedly, I would imagine some to flip-this into a negative, but I see no real need. ‘Endless Winter’ and it’s 1:55 of Crossover Thrash I would arguably compare to the “T-word” tendencies of the UK’s Fastcore giants Rash Decision. Beyond Repair is fastly spreading its predatory wings away from the Crust-nest and expanding in welcome deviations tactically avoiding the categorical risk of stylistic repetition.

The eponymous half-way point furthers this anti-complacency. The band’s Hardcore Punk has subsided and only their Crust aesthetic really remains. In ‘Beyond Repair’ Scavengers Circle lambast what has led us to the beginning of the end. The band do so in a manner of Crust Punk disdain charged with a lumbering rumble of vintage Metal strings that are as broodingly and emotionally unstable as the world is structurally sound. ‘Beyond Repair’ isn’t the rabble-rousing Hardcore track I had hoped for. However, that said, in not being so, is mostly redeemed by it’s crucial importance to the flow of this debut. In fact, such a wish isn’t completely ignored. Scavengers Circle tease you with a token, yet pleasing, blast of Hardcore Punk after the band’s self-perpetuating emotional drudgery has had enough.

‘Engulfed In Famine’ through its own status as a high-point on the release, substantiates its predecessors within-EP experimentation. The band’s Metallic Hardcore is a turbocharged variant of ‘Beyond Repair’. Here, the two-piece’s doom-laden attitude cannot see past the end. The throaty Crust-vocals again, echo Fall Of Efrafa and other Halo Of Flies ilk while poignancy reigns over an equally cathartic battle of Crust and Thrash.

Scavengers Circle deviates from much of Crust’s assumed melody and thus where I initially thought this EP would go. ‘We Summon A Demon’ sees the band further settle into a dominant Crossover Thrash/Crust hybrid you wouldn’t want to meet in a dark alley. Scavengers Circle have despite a reserved six-track stature crafted a debut that not only flows almost seamlessly but importantly, is under no illusions of grandeur. ‘We Summoned A Demon’ accentuates every aspect of the band’s arsenal of foreboding doom. The band’s societally apocalyptic rage is no longer quelled and ‘We Summoned A Demon’ shows a near completion of the band’s journey from eerily melodic Crust onward to the genres lacerating ties elsewhere.

Scavengers Circle have justified their targetted trajectory away from more melodic Crust Punk but the EPs prominent lack of such is still a possible criticism. What the band have provided regardless is still more than satisfactory but that doesn’t disregard any prospective “what-ifs”.

However, track six, ‘Feeding The Monster’, has been positioned last for this very reason. To remind you that the band haven’t completely abandoned this wholly. The final blast falls back on the stylistics of the opening ‘Suppression Of Information’. ‘Feeding The Monster’ segues between OG Hardcore filtered through the Crust that manifested itself later. This is all tied together with limited but crucially placed melodic leads. Such a contrast is minute but allows the debut to encapsulate the band’s sound wholly through the release as a whole. This also partially makes-up for the lack of the eerie foreboding melody many associate with Crust.

Scavengers Circle may divide the opinion of purists but that doesn’t negate the tenacity of this debut. Notably, Scavengers Circle are currently in the midst of writing new material, so stay crusty.

Bards and The ‘Barricades’ Single