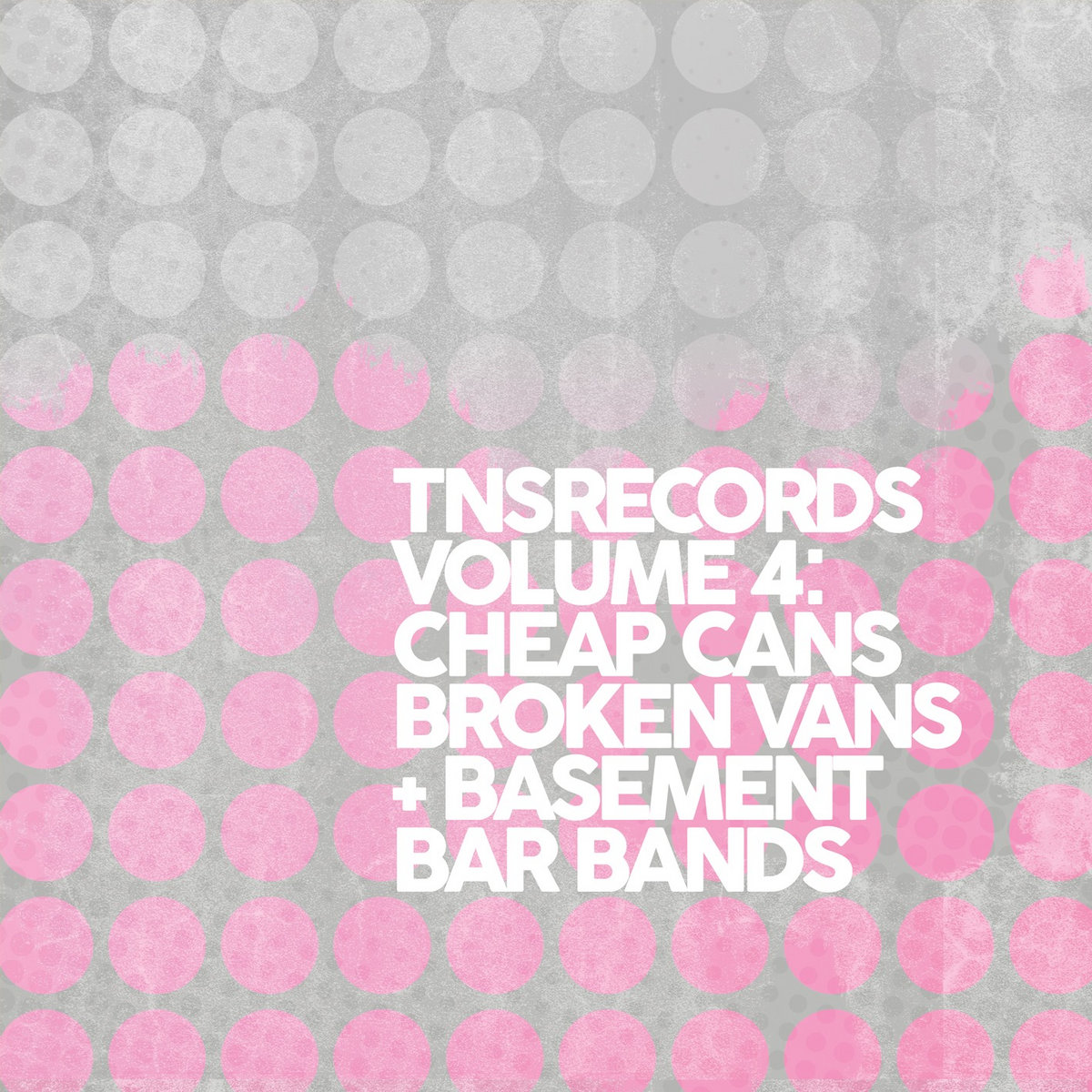 TNSrecords Vol​ 4: Cheap Cans, Broken Vans and Basement Bar Bands is a release marking a considerable milestone. In the world of underground, independent and DIY record labels, every release is an achievement. However, to reach a hundred separate releases on a label that only really started as a tribute to the age-old new music discovery method of the great compilation is a big one. In their own words, TNSrecords ‘miss those days’. An era pre-streaming and pre-internet. An era where holding a shinny disk in your hand as a veritable cornucopia of new noise was the way to support the scene.

TNSrecords before they were known as such, were always about the proliferation of the scene. The year of 2003 is considered their birth year but in those days they were but a fanzine doing their bit (as they have continued to do) to draw attention to a scene ubiquitous in its struggle. This then formed into a Manchester-based club night before delving into label-hood with their first compilation in 2008, which you can find – Here. And the rest is history! A history that has led to the one-hundredth release, following on into fruition after a myriad of internal questions. How many tracks? Who? Track arrangement? The name? The formats? These were all pondered and I’m sure were also softened with a few cans of Signature Brew but it was the very same mantra as the above that came out on top. TNS100 was to be a showcase.

TNSrecords Vol​.​4: Cheap Cans, Broken Vans and Basement Bar Bands is a choice cut of choice cuts. Akin to the history of the label’s comps, TNS100 toasts what the label is about. The compilation is compiled of 33 tracks of bands in, around and outside of the established label. It is not simply a label sampler. You may well have heard some of these tracks before on TNS or elsewhere and some you will hear for the first time on this very release. TNS100 gives exposure to many who aren’t officially on the roster. However, from the horse’s mouth – ‘In short, there are many, many bands, that are part of the TNS family and important to our story‘. Whether that’s a Serrated-And-orse or Tim-maned-Bev-steed uttering such is another matter entirely. On that note, the release does come with an optional zine depicting the TNS tale, so it might be worth reading that and heeding more words of wisdom and immersing in why they have been at full gallop for so long.

I know what you’re thinking and yes, I’m sadly here all wee-LOCKDOWN.

MOVING ON! TNSrecords Vol​ 4: Cheap Cans, Broken Vans and Basement Bar Bands claims not to encapsulate the DIY Punk and Alternative music scene as a whole. Any profession of such a statement and goal would be both impossible and preposterous and TNS know that. This compilation is effectively a trident of noise. On one prong it is stating where TNS are with this not-for-profit venture. On the second, it’s sharpened its point forward in dedication to showcasing what they can see and hear. They want to show you what they enjoy in an ode to that casual conversation between friends; ‘Have you heard *Insert DIY band here* yet?’. Finally, the Manchester label wants to do their very best to present at least some of the stylistic vibrancy of the very scene they gladly inhabit.

Hardcore and Melodic Hardcore, Folk and Ska-isms chopped, changed and spread across more variants than you can shake a stick at, OG-rough-cut Punk-Rock? Cheap Cans, Broken Vans and Basement Bar Bands has it all. If it wasn’t obvious, this is less of a review and more of collection of musings and commentary on TNS100. That said, despite the varied nature of these 33 tracks, their track arrangement, flow and aesthetic cannot be faulted.

TNS’s adoration of the legacy of Hardcore Punk is one of the first and foremost staples of the comp. ‘New Day’ from Incisions 2020 split with Pizzatramp fittingly opens before falling into the stylised variants of both Jodie Faster and Brassick. Nosebleed offer their brash Rock n’ Roll in the previously unreleased ‘I Got You’ before Aerial Salad cathartically release in their honest yet beckoning manner. ‘2050’ from In Evil Hour alternates proceedings as they continue to home their hybridised melodic Punk and Hardcore before the violent Street Punk of The Restarts. Roughneck Riot completely break rank with their previously unreleased and tunefully harmonic yet gritty Folk-Punk after Haest lumber on unrelentingly as they do.

The band that has never played a gig further develop the melodic-wing of their multi-Punk approach in another first for the comp before a track that soundtracked one of the 2020s most notable videos purrs away. The flow of a release is something I examine thoroughly and after several stop-starts,  and full run-throughs of TNSrecords Vol​ 4, I cannot find fault. I mean come on now! Grand Collapse to Casual Nausea and then onward to Pizzatramp. What’s not to like?!

It’s not all charging core and ear-worming melodies though. TNS100 would be nothing without the likes of Faintest Idea, Harijan, Stöj Snak, Tim Loud, Redeemon and Speed Dinosaurs. Again, the label can’t capture it all, but they can damn well do their absolute best to show what the dark corners of this dismal land are making to cut through the existential nightmare of it all.

This compilation is a celebration. TNS do their bit, they are proud of their work and proud of those they work for but there is always more to do. The DIY music scene has always faced adversity and considering how amplified such difficulty has been, releases such as this and what they stand for are unambiguously worth your time.

TNSrecords Vol​ 4: Cheap Cans, Broken Vans and Basement Bar Bands is available digitally, on CD and on gatefold double vinyl and releases on 19/02/21. The pre-order and all things TNSrecords can be found below. Oh, and if you’re wondering who drank the beer, it was Dave(s) but they had good reason and yes, Bill was indeed a Heathen.

However, before I ACTUALLY let you go, finally, there is one last tidbit to add to this release. TNS are releasing a ten-episode video-podcast series in a build-up to TNS 100, counting down and revisiting each of the releases that led up to it. The first episode is below with more to follow.