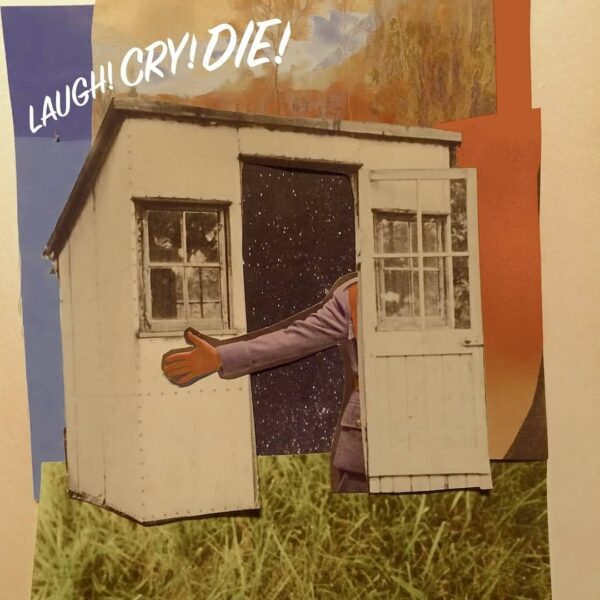 Warped, discordant and abrasively yet playfully brash. Those are the words Teddy’s Atlas and Laugh! Cry! Die! force out of your brain based on but a few seconds of sound. The Guelph and Hamilton Ontario band self-dub their stamp of Punk as ‘3 weiners in a loud Alternative Punk band’ and in an introductory nutshell, that’s a good start. Like many, Teddy’s Atlast defied 2020 in order to release more of their craft into the sound-verse while they still could. And this, well this is how it went.

“Alternative Punk” is actually a fantastic self-classification. The band’s brash nature, upbeat exuberance and oddities very much fit under such a name but there is more. ‘You Too, Said The Postman’ cascades a soaring, whirling lead-line over a reverberating bassline tied somewhere to Hardcore Punk. The band’s vocals are urgent and laden with Indie-Rock quirks further contrasting the brooding, anchoring bassline. Track one is warped and discordant in a manner relevant to the legacy of Post-Hardcore and heavy-set in the same school. However and yet, quite shamelessly, despite this being the dominance, Teddy’s Atlas rendition of Indie-Rock as if it was born from such directly.

Despite the band’s onset aggression musically, their multi-faceted sound isn’t just playful ala the quirks of their Post-Hardcore-Indie-Punk-Rock. This is a band that have done their homework. ‘It’s A New Rage’ is rife with a’90s Punk-Rock and Pop-Punk that is utterly corrupted by the gargantuan level of fuzz emanating from this band. The band then move onward to ‘Under The Skirt’ a track slap-bang in the middle and with an interesting origin story. The band’s habitation space once had a one-armed mannequin for whatever reason and the three-piece would often use it as a spot to partake in a little herbology of sorts. On one faithful day, the band’s vocalist may have been a little too herbal. While on this HIGHer plane, he imagined that the near faux-humanoid came to life and donned in a skirt belonging to an ex-partner. ‘Under The Skirt’ is the tale of this occurrence.

Musically, TA’s move into a brash’90s Alt. Rock fuelled by their abandon subsisting Punk. Four is full of rumbling distorted, riffs and further crashing drumming that is for lack of a better string of words, simply a good time. The eponymous ‘Laugh! Cry! Die!’ with its sardonic moniker is the band most melodic and fastest effort. The broodingly heavy and floor-dwelling bass keeps the band grounded but doesn’t stop them from reaching high with the melodic intro and range-finding vocals. Teddy’s Atlas maintain the EP’s aesthetic, interchanging from blasts of driven, rounded Punk-Rock to playful Indie-leads and slowed-refrains. Truthfully, “straight-running” tempo was the one thing the EP arguably missing. The blasts confined to the penultimate foray, however, satiate this want. For now.

‘The Feeling’ closes on a meandering line that accompanies the releases’ best vocal work. It is important not to forget how much fun the band are having through your speakers. Their warped, hybridised take on Punk is not only refreshing but comfortable and left-field more than enough. ‘The Feeling’ is a jagged, raw underground Rock song and that is all that needs to be said.

To close this review of Teddy’s Atlas and Laugh Cry! Die!, I must go back in time briefly. I was having one of my “lockdown walks” playing the EP on repeat prior to writing this review, trying to think of a tagline to close on and this is what it came to: Imagine if an inebriated Indie-Rock stumbled into a bar dressed in its finery while an archetypical Punk-Rock was playing its abrasive heart out on stage. Indie managed to blag a drink from the bar with their gift of the gab, all the while sat next to Post-Hardcore who is watching Punk-Rock play and thinking, ‘I could twist that into a fuzzed-up spasmodic powerhouse and I think they would be down’. Indie-Rock, as if hearing it, half falls onto Post-Hardcore, draping its arm around them and says ‘I’m in’.

Teddy’s Atlas and Laugh Cry! Die!, find all you need below.