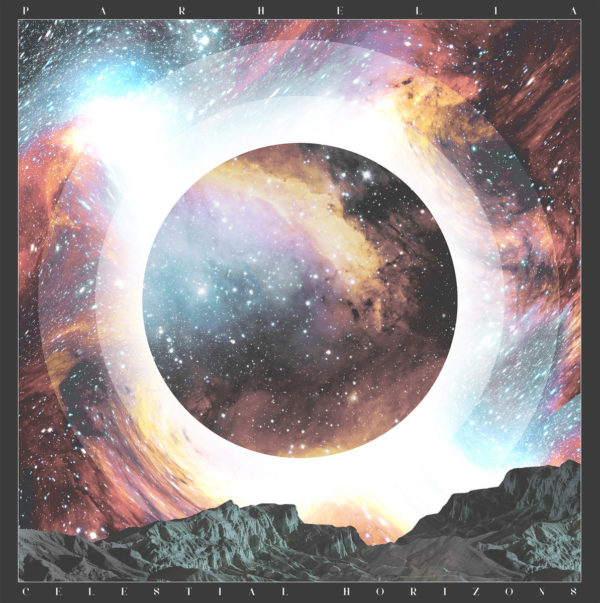 Post-Rock and Post-Metal. These genres are enjoyable to write about, but not the easiest. Parhelia and Celestial Horizons are the latest band and release that I am to tackle within the sonically expansive tapestry that is this wing of progressive guitar music. I shan’t waste any time describing the profundity of the genres above, I have attempted such before, but in truth, one can only touch the surface. And that is the first time I’ve referred to myself as “one” within six-years of writing. The best thing to do now would be to shudder and then promptly move on. *shudder*. To Dublin.

With such forays into the instrumental-verse chronicling a history of the band back to 2006, Celestial Horizons marks the fifth-release and third considered full-length. Number #3 opens with music so befitting to its moniker of ‘A Lonesome Journey’, that resonation is instantaneous. ‘A Lonesome Journey’ is laced with a consistent melodic line but is tied down with a low, rumbling, marginally out of place but purposeful bass-tone. In this slow rumble, as the track progresses in its natural, uncomplicated form, Parhelia ease you into coming to terms with that fact that their Post-Rock would be nothing without its harder-inclinations.

Parhelia infuse their Post-Metal intricately, subtly and with a seamless ease that is beautifully immersive. The band gamble on track two, however. Parhelia push the paramount eponymous composition early with ‘Celestial Horizons’. The title track continues this Post-Metal gloom and conditioning but ultimately straddles the fence between the two genres on show. Personally, this is very much ideal for my taste but that is just me. However, objectively, it has to be said that ‘Celestial Horizons’ is utterly immersive regardless of whatever way you wish to categorise it. Parhelia capture, convey and indeed purvey emotion that is indisputably difficult to negate with words.

Akin to many in these genres, Parhelia, do indeed tease unabated catharsis but not in the usual manner. The band progressively build their layers. They intricately compile their craft but do so in such an ironically relaxed manner, despite the inherent emotional intensity. Parhelia coat everything in harmonious and or inviting melody in a self-sustaining atmosphere so that even the harder-edged notes of the title track glide by.

‘Olympus Mons’ counters the reflective tone of its predecessors and launches its Post-Rock further afoot. Parhelia adhere to the archetypical cycling lines and gentle rhythmic plod but then infuse their work with a considerable dose of the genre-monikers latter half. ‘Olympus Mons’ infuses much more of the “Rock” in the equation and marks a determined, upbeat highlight.

‘Open Heart’ allows Greg Clarke to command the album’s middle. Track four is a credible example of why the genre of Post-Rock, within progressive music, isn’t always mutually exclusive with an inherent cornucopia of complexity. Parhelia are a band that feels no contrived need, only intrinsic desire. With that in mind, track seven, ‘Stars Align’ encapsulates this very mode of composition. ‘Stars Align’ champions dulcet, relaxation-inducing Post-Rock until 1:38. It is here that Parhelia alternate between Tool-esque Prog-Metal and their own brand of tempered, melodic Post-Metal and it is at this moment, that you realise what the album arguably lacks. “Arguably”, being the operative word.

Parhelia, post ‘Stars Align’, breathe a newer, sonically flirtatious and Prog-comprised air. ‘The Veil Of Truth’ sees perfect symbiosis between both Greg Clarke and Cathal Rodgers as the cycling and dependable drumming of Ben Wanders consistently holds Parhelia in place. ‘Maps of Meaning’ continues the playful yet emotive tone that took charge of the closing revelation of the former. I had initially expected to band to follow-on into a stripped-back but emphatically Post-Metal driven sound on Celestial Horizons and despite this happening to a point, Parhelia cleverly quell this synonymous anticipation. The band’s move towards metallic inclinations is ultimately one part typical and one part off the beaten track.

Celestial Horizons ends with ‘Closing Chapter’. Parhelia’s final foray is reserved until 1:20 where a foreboding cloud-cover inhibits your vision within the lucid world the band have created.

Parhelia and Celestial Horizons is a record that flows indisputably. It’s a record that within the content of its chosen trajectory, surprises you and yet maintains the same tone through doing so. Admittedly, I had expected the band’s Post-Rock and Metal straddle to follow on towards huge, finalising climatic cathartic displays. However, in a direct manner, this wasn’t the case. Therein lies one of the few criticisms Celestial Horizons warrants. That said, the method unto which they present their dramatic flair is no less satisfying regardless.

Parhelia and ‘Celestial Horizons’ can be found digitally and physically below: