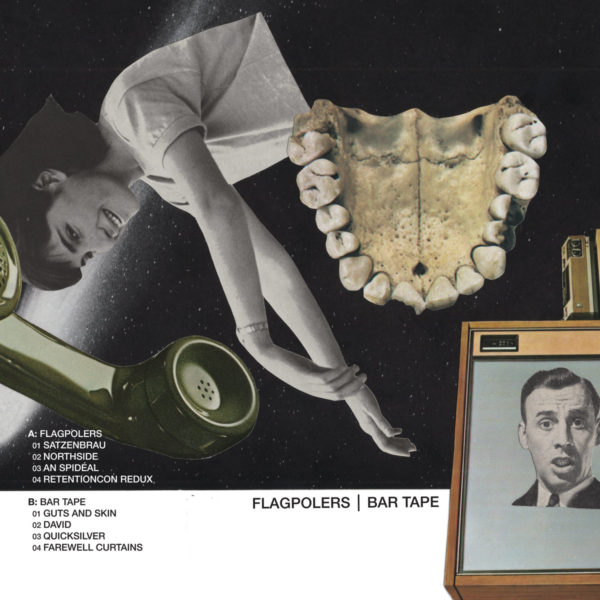 Music is ubiquitous. Is that an excuse unto why I missed the FLAGPOLERS/Bar Tape and their split EP the first time around? Perhaps, but it’s still a true-enough statement nonetheless. Bandcamp is a wonderful place of discovery and split releases a staple in the Punk music diet. Bar Tape hail from Dublin, Ireland and FLAGPOLERS, Vancouver, Canada and they are both parts of this audio-dietary choice.

Do you have a penchant for the melodic but simultaneously not-so melodic onset grit of Dillinger Four? Well then the opening of the four-cuts of FLAGPOLERS may well appeal to you. ‘Satzenbrau’ opens via gloom-ridden low-ridden dive-bar Punk rumble. The band’s gritty and eerie melody owes itself to Post-Hardcore as it juxtaposes the drunken similarly attributed-crunch. The double-fuzzed, dirtily introspective tom-riffery relents in favour of melody more favoured. ‘Northside’ is laden with vintage Pop-Punk sensibilities via the grim life-lesson maturity the band emanate and have barrels of.

The FLAGPOLERS half of this Split EP never quite loses its grit and gusto but leans more and more on the band’s melodic tendencies and it does so well. In fact, the band’s heart-on-sleeve-possibly-booze-soaked cathartic Punk shines in ‘In Spidéal’. If any of those words seem applicable, head – Here – for a band by the name of Our Souls or – Here – for another named the Burnt Tapes. I digress, the band’s escapism resonates from the first line of ‘In Spidéal. Track three-of-four not only boasts a more balanced sound but is most illustrative through its life-lyrics.

‘Rententioncon Redux’ closes the FLAGPOLERS half of this split, pushing further towards melodic ’90s Punk. The fourth from FLAGPOLERS is a far more playful closing note than its angsty grumble from three-tracks prior but it still feels very much at home. Sometimes, you just have to ask – ‘Is this my life or is this retroactive continuity?’

As the FLAGPOLERS gravitated towards a slightly more melodically approachable and playful Pop-Punk-esque craft, their side of the split ends. Alas, it is the way of it but Bar Tapes and their crunching, buzzsaw, sing-a-long-rumble opens their half with a tried and tested Pop-Punk melodic-line over classic Punk rhythms. There is a reason why such a move is so common. Both the bands on this split do suffer from some production clarity issues but again, is what it is. The fact that both bands are of the gruff, gritty and upbeat echelon of modern Punk partially alleviates this issue from your ears, however.

‘David’ maintains the threading lead guitar’s obligation to juxtapose the vintage Punk grit and does so well. Fans of Face To Face will easily pick-up on what makes this band’s scrappy Pop-Punk so appealing.

‘Quicksilver’ is the against the grain-anthem plied with more melodic guitar work and rhythms that are only really “Pop-Punk” because the term exists. In short, don’t simply disregard the first barrel of those P-words, Bar Tape are still a Punk-Rock band, just a marginally poppy-one. ‘Quicksilver’ keeps the tone well-enough but it is in the band’s closing number that the quality doesn’t settle for solid parr.

Speaking of the Pop-Punk stylistic moniker. Bar Tape’s closing number is one of the break-up inspired. But, yet again! Do not knock it, break-up songs don’t have to juvenile in their catharsis, no matter how upbeat! ‘Farewell Curtains’ very much represents this, in a mature yet still youthfully exuberant manner and it’s probably the most prominent of the Bar Tap half.

The manner in which FLAGPOLERS begin is echoed in aspects of Bar Tape’s craft on this release. Similarly, the sonic manner in which Bar Tape exists is hinted at within FLAGPOLER’s respective portion. I suppose what I am trying to say is that, despite its rough-and-ready and rambunctious approach, this is a split well-worth your time; especially at the moment.

Find each half via the bands respectively and via Bar Tape for physical cassettes and full downloads!

FLAGPOLERS/Bar Tape and their Split EP, have at it.

The Sewer Cats and The ‘Zelda’ EP