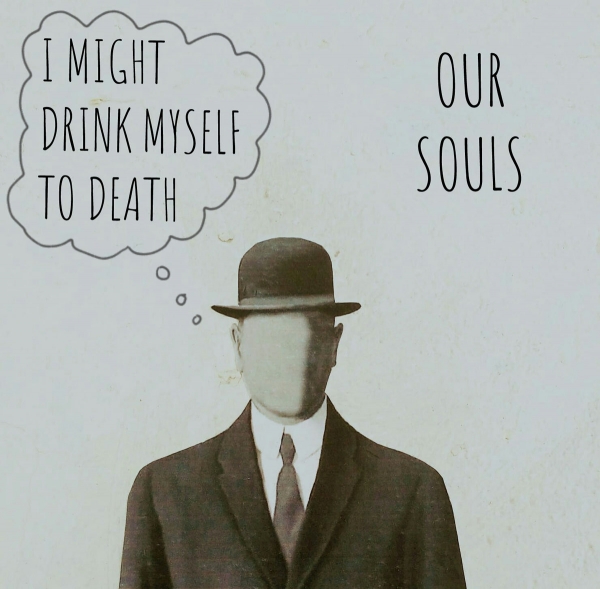 Gruff-Punk is a pseudo-genre or rather a description that has been churning out some of the best and most emotionally resonating Punk bands and albums for quite some time now. The moniker is doing particularly well of late, after a resurgence of a style championed by the likes of Hot Water Music, Nothington, The Lawrence Arms, Iron Chic and a whole host of others who has now taken up the mantle, especially here in the UK.

This every-day-person’s cathartic “heart punk” is exactly what we find on the debut EP by Leicester‘s Our Souls, the beer-soaked and beardly-titled – I Might Drink Myself To Death.

’45’ begins with a mixed feelings approach to modern life and the dismal repetition so common now. This is obviously done via the excellent gruff-Punk stylistics of upbeat guitar’s echoing ’90s Pop-Punk and a mid-to-fast tempo to hammer the point home in an upbeat fashion contrasting the point; a point that depending on how you look at it, becomes far more positive as the track progresses. Either way, the band have your attention.

With the ’90s a second in the past via that mention, the chugging, rough cut but playfully inline with the previous effort ‘This Is In G, This Is For The Hustlas’, charges along resonating more and more with every up-beat yet negative word. Our Souls are very much writing, playing, singing and living what they speak of and it’s actually ironically but crucially life affirming.

The band’s shoe factory and front room recorded Punk shines at it’s best and production lending in ‘Another Five Days’. It’s a track allowing myself at least, a moment of catharsis and a smile before my seven-day working week starts from tomorrow. ‘Another Five Days’ is a blunt, classic and satisfying up-tempo, anthemic slice of working class Punk-Rock in the bluntest way possible. It’s a song that exists for the very reason that it is actually born from and it’s morbidly beautiful.

‘Gundrug’ is 0:43 seconds of British wit used to make a point. The band give their two cents (aptly) on the issue of US gun ownership and as you’d come to expect from Our Souls, it’s very straightforward.

I Might Drink Myself To Death is an EP clear from its title and the very first few lines of the very first track. The frustration and disaffection of the modern society we inhabit is laid bare through the eyes of Our Souls. They are looking out of a window and they don’t entirely – or at all – like what they see.

The cleverly titled and written ‘Post-Funny’ is a track you will want to completely concentrate on. The band’s melodic yet gritty and sharp upbeat Punk is as solid as it’s been thus far but the real treat here is the songwriting. Our Souls have so much conviction and not only does the music itself lend to this before even a word is uttered but once said words are uttered, it’s easy to lose yourself in how real it is and the positivity it eventually and determinedly radiates.

Gruff-Punk, it’s alright and so are Our Souls – the band, I’m sure our actual souls are probably compromised but the band are worth your time, well worth it in fact!