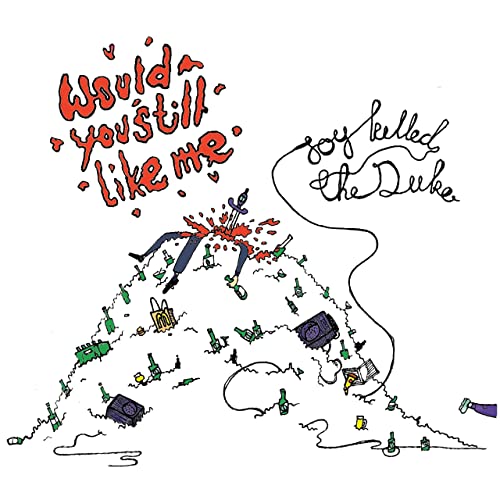 Nowadays, when the word “Grunge” is used to describe a new band, it is often greeted with an eye roll. Joy Killed The Duke and Would You Still Like Me are very much a band existing to dispel this. The self-labelled “Neo-Grunge” four-piece and their flamboyant attire hail from Utrecht and this past May, released their debut EP, Would You Still Like Me.

This “Neo-Grunge” garners attention via its wording but also in that the band extrapolate their term. This new-found fuzz, via Joy Killed The Duke, is supplemented by various “heads round the door” via Punk and Garage Rock respectively.

‘I’m Not The Girl’ lays out the difficult lyrical themes of the EP. The slow, lumbering Grunge slowly motions towards dominance as lyrics denoting to drug abuse and misguided youth bare all. JKTD contrast this with an ascending chord progression and a brilliantly contrasting lead-line before returning to the lumbering verse once more. The band move on with their adolescence into adulthood as the lyrical life choices further whirl out of control. The band’s Grunge is disinterested, fuzzed, and discordant but also has a clear modern refinement regarding its production. ‘I’m Not The Girl’ thinks outside of the often limiting Grunge box, with the melodic vocals of Joy linked to the grit via only the middling melodic layer.

‘Affection’ is a gambling deviation. Number two is by no means a “bad” track, far from it even. But, for those who were expecting and/or lusting for more mood-laden Grunge will be somewhat confused. ‘Affection’ pushes an overt Garage Rock n’ Roll hegemony with the only link to the prior being the tone of the grounded bass. ‘Affection’ is a tale of insecurity and has its main draw lyrically. The eponymous ‘Would You Still Like Me’ is as provocative as you’d expect from JKTD.  The band hybridise the stark contrast of the former with its own predecessor from verse to chorus and back again. The playful Garage Rock tone applies a sardonic lather that the Grunge weight coexists with.

‘Break Up Song’ is the direct result of a fictitious timeline where Garage Rock was somehow aware of ’90s Alt. Rock. I would hazard the opinion that many forget the playful and inviting nature much of the Grunge greats employed. In ‘Break Up Song’ the four-piece under review here again blend their influences more comfortably. ‘Break Up Song’ is a hybridised highlight on this debut.

‘Stay Away’ allows the omnipresent Blues-esque tone you’ve been hearing throughout the EP to settle more obviously. The band are at their best when extending from their Grunge foundation rather than moving away from it wholly. ‘Stay Away’ is a number crucial to the flow of this debut and sits the band as more Pearl Jam, Hole, Soundgarden and Audioslave than Nirvana. Although that said, the infamous latter band clearly have some influence as a whole. ‘Stay Away’ defiantly reverberates into the Funk-Punk intro of the closing ‘Fucked In This World’ that then filters such into the heavy-set foundations of Joy Killed The Duke.

The four-piece close with their Punk-streak brazen and forefront. The tempo and dynamic changes that have shone throughout are polarised and seamless now. The band’s disdain is clear but as is their sardonic manner of displaying it. The stark reality of the lyricism is only but aided by this Groove-emboldened Funked-Grunge Punk and I would theorise that this track was always going to be the last.

The working, monied, subjugating capitalist-drudgery is felt throughout. Notably, even with the contrasting pop-infused bridge from 2:53 to 3:56, this sentiment is no less cathartic. Joy Killed The Duke have unearthed an ambitious debut that is intentionally a rocky road, but one that ultimately pays off. This is especially the case with the closing 4:42-mark until the end that I will leave for you to discover.