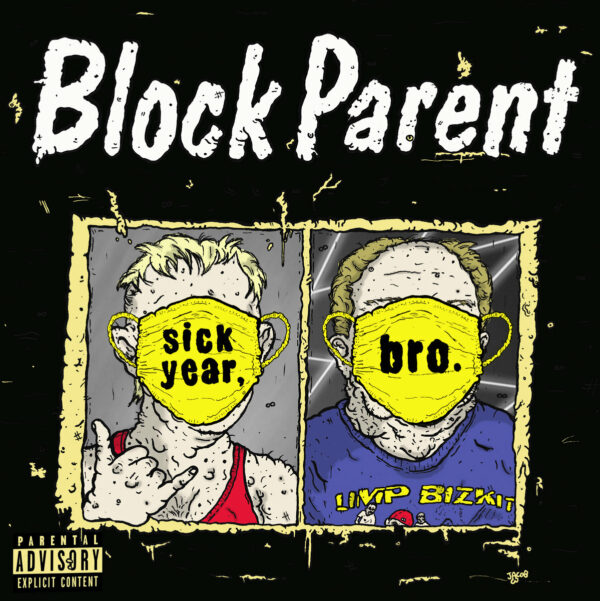 Block Parent and Sick Year, Bro! enter after the Cambridge, Ontario former exclaimed ‘let’s make this year our fucking year’ at the end of their 2020 split with comrades Frank Dux. Now, you can’t fault their enthusiasm. Block Parent are exuberant, fast and near completely comprised of classic Canadian quirks. That much is given so it goes without too much saying that with all of the above in mind and after the year-plus of “what”, that the band would name their latest full-length as they have. That and absolute respect to the legend that designed the artwork, capturing the prolific idiocy of many whilst referencing the second-best Green Day album. We can talk about that later but only if you agree that Insomniac is the best.

Divisive Pop-Punk discourse aside, it is time. With so much of Canadian Skate Punk history either leaning toward a scrappy yet proto-techincal late ’90s variant rife with classicism and the rest into the overly techy-realm of Mute, Belvedere and the like, Block Parent play it their way. ‘Sight For Pink Eyes’ rides a brash drumbeat exuding chaos whilst covertly implementing quick-fire precision. Vocally, lyrically and across all else, Block Parent are back and just as obnoxiously confident as usual, but louder. Track one is a testament to the Skate Punk three-piece formula often forgotten in today’s technical maelstrom. However, with that said, within moments of ‘SUBAR’, the meandering melodic lead and covert techy-catharsis rears its Cigar-esque head yet again. Two draws the band to the stage with the likes of Loser Points, Trashed Ambulance and The Moröns whilst maintaining their rough-cut yet impetuous and angular proficiency.

Three tracks into this sardonically existentialist tirade of Punk abandon and ‘Helluva Bad Dip’ relents. The breakneck pace is alternated for cycling power as the band aren’t feeling quite as tight emotionally as they are at blast their coping method. ‘Comeuppance Goes Downance’ then takes a humourous jibe at the social division of the past year whilst fully unleashing Zack behind the kit. Track four is also the band’s most melodic and straight-running but importantly so via the necessity of its frustration at our societal tragicomedy. Yet again, however, this not-quite newfound technical edge communicates its presence through quick-fire drum fills and jagged, breakneck tempo alternation.

‘Riopongu’ then hurtles onward with more of the natural same. There is nothing overtly new here but BP know that. The band have never been shy. Their tempo has always been tenacious but on Sick Year, Bro! it is proliferated by and subsists on its own energised exasperation far beyond definition. ‘Riopongu’ boasts true to form melodic Skate Punk running in harmony with the genre’s lineage in and around Pop-Punk. This is particularly the case with the flexibility of the band’s lead as it teases light-jabs of Pop-Punk in quick refrains from the tracks earnest, hopeful yet downtrodden drive. There is a light, somewhere.

Despite their sardonic smiles and humourous social commentary, Block Parent are near-constantly juxtaposing it all with a ubiquitously looming and brooding temperament with track six as a prime example. Make no mistake, this is a fun record but its inspirations aren’t always quite so upbeat as the band’s lyricism rolls in symbiosis with their notably harder approach. Track seven in particular fights against the idea of growing beyond your passions in favour of misery and repetition. Deconstruct the myth, be yourself and do so to the jagged Pop-Punk-laced aggro-Punk of Block Parent. The growing pains never truly leave and this is yet another theme of the bare-all Block Parent and Sick Year, Bro!

‘Quick Ask Zoe’ boasts another standout performance from Zack whilst both Jake and Jacob maniacally blow their vocal cords and microphones with a defiant grin.

‘Take Part or Die’ has a tough act to follow. Track nine breaks rank in a perpetual cycle beset with the band’s powerfully vintage bass tone and frantic vocal interplay. Block Parent continue to vent their year-full of revelation and reflection more in line with the likes of Off With Their Heads than any Skate Punk band you’d normally place them beside. Does this break things up? Yes. However, does it also add variety to Sick Year, Bro! in a timely fashion? The answer to that is a resounding yes. ‘Take Part or Die’ was destined for this release and it captures the mood of Sick Year, Bro! in a wonderfully discordant yet chaotic clarity.

Block Parent and Sick Year, Bro! close after a run of chaos that is as refined as it isn’t and also as obnoxious as it is the opposite of contrived. You’d be forgiven to expect another relentless blast of gritty, late ’90s Skate Punk. Truthfully that is where I had expected to end, on more of the well-versed and by now comfortable same. Block Parent had other ideas. Though the band exude such seemingly inexhaustible energy, in ‘Stixville, Population 111,000’ they tone it down.

Musically, that is. The band’s raucous Punk-sound is relinquished and reserved as their homegrown self-subsisting quirks intensify their mandate of “self-reflection made easier with a smiling facade”. As per this album and the band’s modus operandi, track ten is fun but only presenting as such to make a point. Where will they be in ten years? Contemporary existentialism is on the table again with a side salad entirely comprised of mental health conundrums and uncertainty beside a plate that doesn’t even know it’s on the table. All the while, confused smiles air their thoughts over stripped back sardonic tones and unplugged strings.

Block Parent have written a cathartic Punk album and I think you should go and listen to it. Need I say more? I could but I think the incessant waffle above paints a sufficient picture. Sick Year, Bro! is available from Block Parent and Glue Gun Records physically and digitally everywhere else.

Now, about those Green Day albums!

Oh The Humanity! and Their Self-Titled