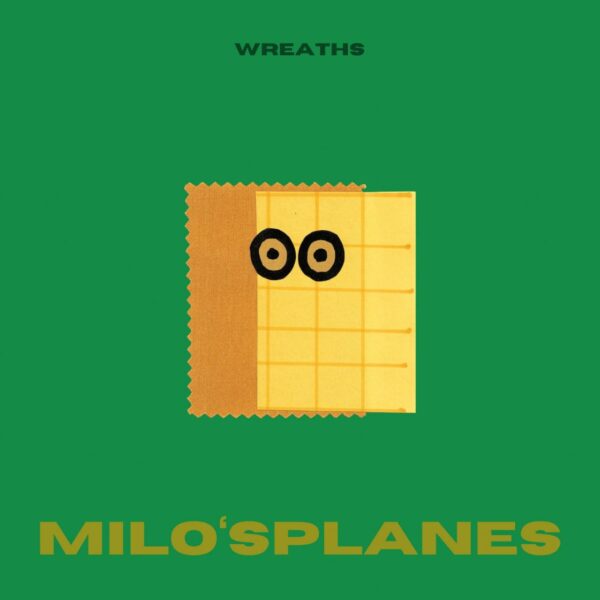 After some minutes tucked away waiting for life to do its bit, Milo’s Planes and ‘Wreaths’ recently and finally returned to the After-Core realm of Punk-Rock continuity, legacy and canvas of seemingly limitless noise. By that I mean, in their first recorded sonic-foray since 2017, Bristol Post-Hardcore three-body Milo’s Planes have taken up audio-aviation once more. A new song, the Bristol band have released a new song. One day I’ll explain something succinctly.

Milo’s Planes, if you don’t know, capture a very specific period in Punk music history. A time where an array of stylistics were force-fed through an abrasive gauze. Said stylistics were then laced with emotive and crooning melodies that were themselves warped by the cathartic mass of Hardcore Punk. A period where the likes of Fugazi, Rites Of Spring, Embrace to name a few would inspire a spasmodic new generation of Punk bands and lay down blueprints that would change everything. Enter-proper now, Milo’s Planes and ‘Wreaths’.

The Bristol three-piece are never far from a (seemingly) spontaneous and unpredictably vibrant combustion. Milo’s Planes variant of the above early-epoch is perhaps one of the purest to form renditions you are likely to hear. That’s not to say they don’t apply their own stamp, because they absolutely do. However, in a world where Post-Hardcore is now one of the most varied branches on the contemporary gargantuan sized Punk-tree, MP’s variant is arguably the closest to the OG-chaos many of use are too young to have seen. That or we weren’t born on the same continent. Details eh?

‘Wreaths is an interchanging, sonically bipolar slab of jabbing, jarring, haunting Post-Hardcore Punk-Rock. Milo’s Planes quite typically blast what they are good at. The band are just as likely to constantly shuffle tempo, dynamic, structure and patterns as they are to blast straight fuzzed-Punk. In ‘Wreaths’, we get the unsettling, unstable, yet thrilling former. The single is but a modest 1:49.

Initially, the band tease a playful line, beaten forth by earnest punches. MP’s then fall into a Post-Punk adjacent backing to prop-up the Mackaye-to-Picciotto-esque (orchestrated) battle from the mic. They then abandon the tuneful-warp in favour of a minute, barely two-second blast in an ode to Post-Hardcore’s latter double-barrel. This is all within a 0:50 window.

Post-0:50, they bring their abrasion away from the boil. The heat retreats to a low-temperature over a cycling drum-beat that threatens to boil at a moments notice. Equally low vocals then follow a symbiotically brooding, foreboding, meandering effort from the band’s respective axes onward. ‘Wreaths’, again, captures a time where the energy of Hardcore Punk was alive and well, refined in its technical ability and compositional knowledge but also just as or perhaps even more unhinged.

Milo’s Planes then up their ante and build their rough-cut layers into one final maniacal display and then abruptly end. Despite all its vibrancy and far-reaching variants, ‘Wreaths’ is a true bonafide of the genre. If it wasn’t Fugazi way-back-when, it would have been Milo’s Planes.

Album number #4, Belly, will be unveiled in December with all ten of its contingent being released as singles. Keep an eye on all things Milo’s Planes below.