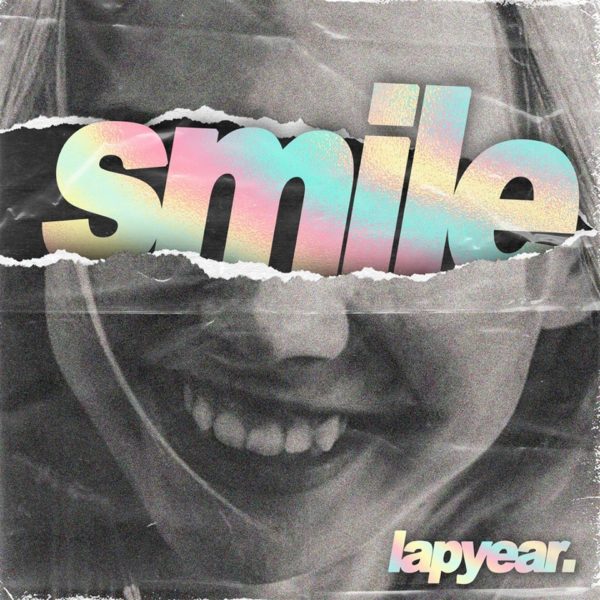 As of May 15th, LAPYEAR and their Smile EP publically became apart of the Venn Records catalogue. The genre-fluid underground label is one of interest for this very reason and with their acquisition of and resultant releasing of LAPYEAR, continue to propagate the vibrant UK underground music scene.

The London band’s catalogue to date denotes the point in the genre-timelines where crooning Emo tones were infused into the carefree UK-tradition of Indie-Rock, albeit with a regular Alt. Rock drive and accompanying heaviness. Smile begins straddling the combined stylistic of the three with a strong prevailing Shoegaze tone. Initially, atop playful Indie-Rock, ‘See Inside’ quickly and thankfully falls back on the band’s Alt. Rock leanings nested between Pop-infused Shoegaze tones culminating a welcome layered contrast. LAPYEAR alternate tempo and vocal dynamic regularly enough to maintain interest and this coupled with said prominent layering, stands the opening track in good stead.

‘Under Your Tongue’ slows the tempo but regarding all else, maintains continuity. LAPYEAR produce a variety of Alt. Rock away from the more Punk-rooted offshoots in favour of melodic emotive Rock itching to embed itself in your ear canal. On this count, the band cannot be faulted. ‘Under Your Tongue’ is a modern Shoegaze Emo-tinged Rock song designed segue and flow between more-defined tastes. I had expected to criticise this heavier but truthfully, any such criticism is negated-enough by the band’s ability to re-hash interest at a moments notice. This skill is entirely possible due to the inherent, yet simultaneously subtly organic complexities laced throughout, themselves resting on heavy-set bass and drumming displays.

‘Only One’ is more in line with what Emo-Pop songwriting is synonymous with but is still delivered seamlessly. The track is slow-burner within its verses but in a state of perpetual build-up. The band are adept at the melodic, lucid dream-Shoegaze and thus far on Smile the structure is an either comfortable or predictable depending on how you look at it. The band’s progressively heavier, weighted and increasingly gritty formula is always the result. LAYYEARS’ ebb, in short, always leads to what they’re best at. In further short, they are better when playing heavier. ‘Only One’ ends superior to its start and that is no small part due to its stellar, release-notable guitar-parts.

‘Negative – I Wish I Was’ akin to ‘Under Your Tongue’ was a forerunner for Smile. It is here that the EP really begins to settle and the band tempered grit is more obvious. ‘Negative – I Wish I Was’ redeems the slow-to-best of ‘Only One’ while still maintaining what the track added to Smile. The penultimate number is akin to what made the band notable in the first place in a refreshing callback to their roots.

Smile ends with the delicate flow of ‘Puzzles’. Although this track would have been better suited prior to being last, the band’s gentle and melodic sound is inviting and ear-worming. This is the case in such a way that it almost knowingly knew what I would what go on to say. Number five is reserved for the most part but maintains attention in the same timely manner as the EP proper. To be succinct, ‘Puzzles’ despite a debatable place in the running order, in reality, still ties off Smile well.

‘Puzzles’ ends an EP that, although sees its strongest reflection via its heavier lower-ridden approach, shows the band’s shameless penchant for a Pop-infused gloss, dream-like Shoegaze and emotive and bare-all songwriting. Smile is a creature of habit but an enjoyable one natural unto itself. If a release is able to negate its own shortcomings and own them, that usually means its worth your time.

LAPYEAR and The Smile EP, out now via Venn Records.

Pigeon’s Pocket and Their Self-Titled EP