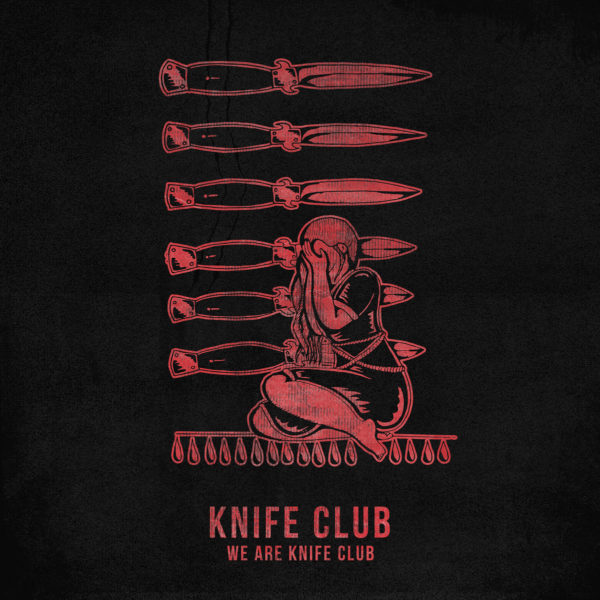 Now the dust has settled, it is a time as good as any to weigh in on the “what was all that about” event that was the emergence of We Are Knife Club. Now, chances are, you know who this six-piece are so I won’t go into detail unto how they got to be known. However, if you’re as confused about the above as you are regarding the current advice of the UK Prime Minister, you can read an interview via Shout Louder – Here.

And so, at knifepoint, we stand! Given the collected experience of this band via the likes of Revenge Of The Psychotronic Man, Casual Nausea, Faintest Idea, Nosebleed, Matilda’s Scoundrels, Haest and Mousebrass, I, like many, admittedly had no idea what to expect. They could have concocted literally anything and yet thankfully, relatively melodic Punk-Rock acting as the filling between Hardcore Punk and its latter-timeline melodic sibling greets you in ‘Making A Meal Of It’. The band’s dual vocalists collide and rebound continuously with archetypal UK Punk tones alternating between sounding hoarse, strained and urgent.  Track one is a statement of intent.

‘Schnitt Mit Dem Küchenmesser’ settles into the tempo laid down by its predecessor. The sextet shamelessly adheres to the up-tempo OG-Hardcore which suits the message etched across the blade’s edge. Track two very much captures rage-incarnate to music in a manner hard not to like. There are those that perhaps wishfully predicted the band to be wholly idiosyncratic but that isn’t what came to pass. Personally I see no issue, despite their scene-agitating origins and conduct, the formerly elusive noise-makers are unquestionably organic.

‘Remember The Gold Dollar Sign Hoodie’ was a forerunner and for good reason. Track three cleverly and crucially sits in a prime location within the running order. As the debut further hurtles towards more recognisable Hardcore Punk, you suddenly find yourself begot with a revelation that you are in the fact taking a class on “how to play fast-Punk without sounding contrived” without your permission. Hardcore chord progressions and cycling groove are a huge yet simultaneously subtle part to the band and intrinsic to their art. The latter parts of this third track see the dual vocals further substantiate themselves paired brilliantly with a soaring melodic drive, itself putting a contrasting distance between the brash Punk below. The six-piece may have some substantial roots in gritty UK Hardcore but it isn’t the be-all of their point. Or points. Whatever.

The anthemic melodies that momentarily almost tease Skate Punk in ‘Artex’ are retconned within seconds. ‘Artex’ is a treat both lyrically and vocally and provides a revelation. The band’s position on the Punk and Hardcore spectrum is capturing a sound, intently or not, that would eventually become Skate Punk later down the timeline. Prove me wrong.

‘The Tibby Tan Tiger’, in digressional further continuity, moves further into the melodic ’90s with a comparatively mid-tempo 1:32 that’s arguably the best on the release. ‘Working Class Tories’ changes historical direction and embodies Garage Punk on the one hand and Melodic Hardcore on the other. Despite all these tempo and varying interchanging levels of gloss and grit bound to annoy the Punk purists, the intensity of this release fails to falter. The album toys with you ala its origins. Regarding the guitar work and those who prefer it on the melodic flip-side, ‘Working Class Tories’ showcases some the album’s best and without it, despite its message, the track would fail to be as memorable.

Akin to the above, ‘The 1%’ is what we’re all – or rather should be – ruminating continuously. Such systematic disdain is set to emphatically clear British Punk-rage and doesn’t disappoint. Knife Club dispenses with the mid-album melody and showcase the best of their vintage Hardcore penchants in ‘I Mean, I’d Probably Take An Adidas Endorsement’. ‘Killing Two Birds With Two Stones’ deviates AGAIN but brilliantly. The band are skilful and it’s fair to say that they don’t miss a single beat, line, lick or topical punch-face political jab. Or would that be stab?

‘Do You Want A Knife With That Salad?’ samples more melodic Punk influence with the only continuity being the guitar-tone and playful vocal-interplay beset with harsh tones running along the blade edge. We Are Knife Club is getting it done. Where have I heard that phrase before? Moving on. The aforementioned again boasts more of the band’s best. The political tirade and “let’s make music we all like” approach continues in the back-to-basics ‘27% Of Statistics’. Following on, ‘Tnsclub7’ closes a twelve in twenty-one-minute-album that no one could predict.

‘Tnsclub7’ ends with an element of positivity over the band’s most rounded Punk-sound and in doing so makes a point outside of its words. Anticipation and ambiguity were prominent sentiments in the build-up to this release. The band, again, could have abrasively cut your face off with anything but chose to do so with an album that is, in essence, another Punk album.

Sorry, another Punk album absolutely worth your time. One that just gets on with it, gets it done and is comfortably the product of musicians who love what they do and the scene they inhabit. Oh and crucially, don’t talk about the band, but do and don’t go outside either, unless you want to. Because you’re allowed, but not really.

Find Knife Club amongst some other TNSrecords bands in the ‘New Old Core!’ playlist – Here.

Knife Club – We Are Knife Club, out now digitally and physically via TNSrecords and 5FeetUnder Records.