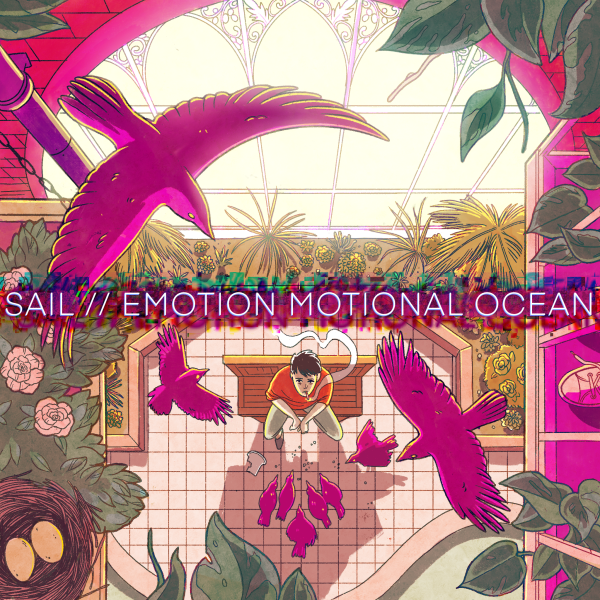 Introducing Sail and the forthcoming ‘Emotion Motional Ocean’ is the order of the day. Combining that of an “introducing” feature and that of a few remarks on their soon to be released single I felt was the only way to properly depict the hybridised four-piece. Based around Taunton in the deep, dark and musically lucrative southern west country of England, a land where the riffs are as vigorous as the thickly comprised and broad accents, Sail have been releasing music to an undulating frequency since 2013.

Grounded in the rhythmic, groove-laden, raw but also often quite erratic Hardcore and Metal melting pot known as Sludge, Sail are known for their progressive take on and around such a foundation. Grunge and Alt.Rock, juxtaposing and glossed melodious instrumentation warped by Psychedelia and timely Post-Rock-centric instrumentation, Sail embody, encompass and elude to all of the above as they twist their craft.

Take the cumbersome weight of 2017s Slumbersong and its predominantly archetypal Sludge assault riden with charged yet Stoner-adjacent riffs and aggressive instrumentation. The album’s winding, meandering melodic leads and motions toward harmonic, clean vocals cut a stark contrast. See ‘The Weight Of Gold’, ‘The House’ and ‘Ghosts’. Such deviation would then yield and increase the prowess of later, more fluid work such as 2019s ‘Starve’ and 2020s ‘Mannequin’.

Now, if you haven’t already attributed such a term yourself, then the term “Progressive Sludge” quite intrinsically fits the four-piece. Especially as they themselves do. Fancy that. But yes, ‘Emotion Motional Ocean’. Releasing on 03/06/22, Sail’s newest is a 5:06 exploratory dive into the far from forgiving rhythm of emotions and further down through their progressive and heavy sound. Tom Coles’ charges sail as they take huge swathes of soaring instrumentation and keen layering from Post-Rock and applying their serrated edge without overtly infusing Post-Metal, Sail tie themselves to their past with an abundance of slack.

Tim Kazer’s vocals complete a wholly in check band-wide synchronicity as they continue to transition and hone their reach. Speaking of which, ‘Emotion Motional Ocean’ is not your usual Sail track and yet, not unlike ‘Mannequin’ before it, displays its lineage for all to see, but only when it pleases. At 3:28, the amorphous Sail sound subsides from the apex of its Post-Rock and Sludge hybrid. Though rounded, it falls into the latter for a familiar, brilliantly contrasting barrage unleashing the rhythm section that had been lurking below this more melodious, progressive take. Sail then close with their heavy-set yet soaring concoction once more ahead of what I would wager to be an exciting period for the band.