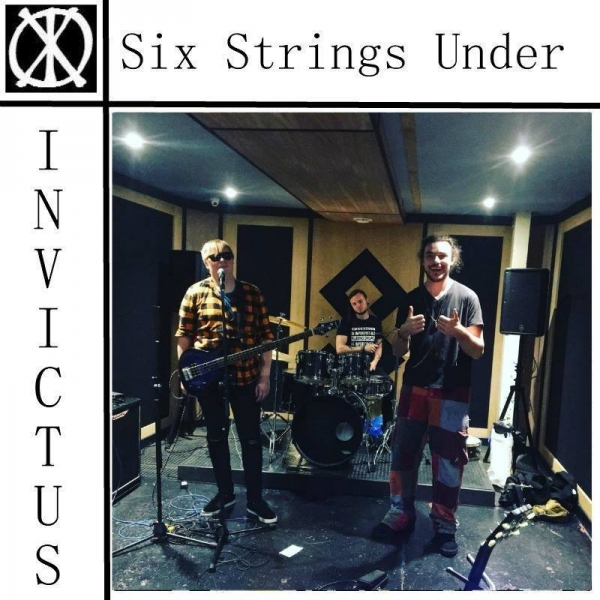 If there’s anything worth labelling ubiquitous, omnipresent and apparently never ending it’s the presence of classic Rock n’ Roll and it’s moody (usual) partner in crime, Blues-Rock. Taking the genres at face value yields importance and recognisable status and likening to the those forces of Rock (for better and often worse) still plastered on walls, t-shirts and populating record collections and Rock club nights. It’s easy to leave it there but in truth, both genres influence on likes of Metal, Punk or even later incarnations of it’s very self add depth beyond this face value importance, that and their continued role as a notable – or to repeat myself, omnipresent – force on the near-limitless cavernous dwellings of underground Rock music.

In short, this is where bands such as Bath/Bristol three-piece Invictus come in via their DIY Rock enveloped in Blues, distortion and tributes to a classic formulae and a few of its children. The band’s most recognisable material being The Green Room and Six Strings Under EPs released in 2017 and 2018 respectively.

Heavily distorted and existing under the permission of heavy Blues reverb, the band’s first EP despite its humble beginnings has all the grit and tokens you’d expect from this genre locale. It’s nothing new, overtly technically proficient or revolutionary and neither is it trying to be or should be. This is very much over-driven, unadulterated and unapologetic Blues-Rock and I really don’t see what else you can say, besides that 80’s Hard Rock and Jimi Hendrix are clear precursors to the idea of forming this band.

Invictus enjoy their craft, that much is obvious, which in turn allows the band to shine and negate any criticism on the clarity of recording or production; something notably rough-cut but still fortuitously fitting to the stylistic chosen. Said “rough-cut” approach is only enriched by the band’s use of again, classic and vintage guitar tone, one that transcends the term “boring” in that said tern has no meaning. It’s all just Rock n’ Roll. See ‘Bite Your Tongue’.

‘John The Revelator’ completed that earlier release with it’s bluesy Southern Rock and then it was all quiet in on reverberating-front until 2018 when Six Strings Under ebbed into play. Much like it’s predecessor, this latest release is currently only available on Soundcloud, although I have been assured that it will migrate to streaming services soon enough.

Invictus, at least via ‘Superman’, have left much of their abrasive over-driven distortion behind, in turn supplanting it for a more traditional Blues-Rock formula laden with infectious Pop-hooks and overall more at home vocals that are very fitting after the tracks shakey and subdued start. Think of the slow transformation from Caterpillar to Butterfly but in the context of this three-piece.

Again, if you’re expecting something intricate and modern, this isn’t the release for you, rather one for the chilled drowsy summer evening or dingy underground venue. ‘Swallow Your Pride’ is instantly memorable and a contender for those “Drowsy Rock” playlists on that popular streaming service people rather enjoy. This second track of Six Strings Under very much merges the softer, less cumbersome Blues-Rock from ‘Superman’ and all the band have learned from such with the more rough and ready dirge of the previous EP and I’d be lying if I said the contrast wasn’t excellent, so much so that the production (albeit slightly) limiting the weight of Conor Churchill’s drumming is forgotten; for now.

Invictus return to their roots in the politically aware and low-ridden distorted dirge of ‘No More Leaders’, where the band tease their previous heaviness as much as a capability to prospectively go even further, which is only supplemented and made more mysterious via a brief burst of pace.

Six Strings Under is the sound of a far more comfortable band, by no means perfect but undoubtedly enjoying themselves and one you should again, undoubtedly go and see in that dingy dark (probably literally) underground venue I mentioned.