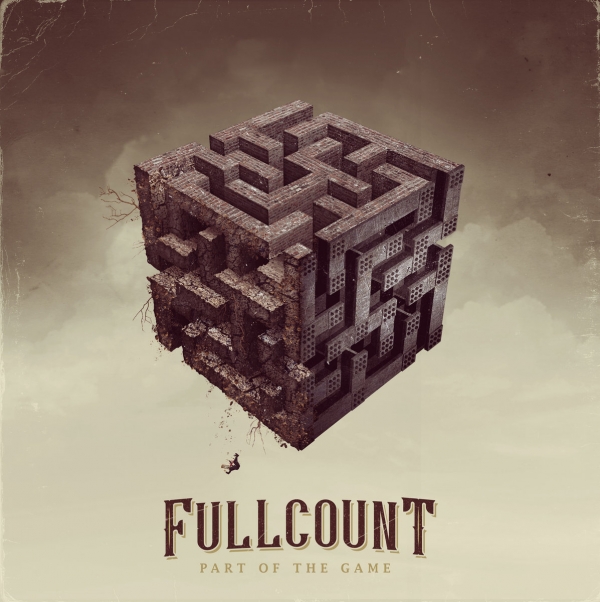 Editor’s Note – Ever since I moved EN off the seemingly inextinguishable back-burner, the response and support has been nothing short of incredible, which why we find ourselves here today, for the FIRST “Community Contributor” in the form of one Oscar Manners.

Oscar has been a supporter of Ear Nutrition from the beginning and before that it’s parent site, Musically Fresh. I once even stood in a crowd with Mr. Manners next to me as we sang a cover of ‘International You Day’ by No Use For A Name alongside a lone man and his acoustic guitar and later discovering his talent as a wordsmith, I asked him to come on board to EN. So without further rambling, Oscar tackles Part Of The Game via Québécois Tech-Skate Punks, Fullcount.

Canadian Punk has a long and storied history that is perpetuated at least on a surface level by Sum 41, Simple Plan, Billy Talent etc. Dig a bit deeper down and you may discover the likes of Belvedere and Chixdiggit, defending the faith of fast rad Skate Punk and gaining thousands of fans in the process. One of the newest and most promising bands to rise up from the land of poutine and politeness are by the name of Fullcount.

Formed in 2012, the band has been providing the world with some of the finest quality Punk-Rock while ripping stages all over their home nation. This sentiment is shared by the likes of their touring partners, no less than the exemplary NOFX among many. Their brand new album, Part Of The Game, does absolutely nothing to diminish their flame and only serves to broaden their appeal in their own country and indeed overseas. The album is, quite frankly, an absolute blinder.

Opener ‘Back Against The Wall’ kicks things into high gear almost immediately, with a rocket start up sequence preceding the blistering speed and raw aggressiveness to come. This is the perfect beginning to an album like this, as it really feels like you’re being subjected to the g-force of a rocket launch when the flawlessly executed drum patterns break into full power and the roaring guitars punch you directly in the face.

Instrumentally, the album is top notch with never a missed note or imperfect drum fill. The guitar interplay is exceptional, with soaring harmonies and intertwining riffage supplementing the rapid pace of the songs. The three-guitar lineup really adds to the power of the tracks, with muscular riffs supporting the slick leads and sweeps. This is perfectly shown in ‘Ten Shots Deep’ where the lead and rhythm guitars merge at times to elevate the songs to peak intensity on more than one occasion. But to single out one part that outshines the rest is a pointless task as the quality of the writing is so consistently good across the board.

The use of VST and Synth instrumentation on a few tracks is a slightly unconventional choice for a Skate Punk band, however this adds to the overall listener’s experience and the general sense of flow the album brings. Plus, who can blame them for wanting to drive a road less traveled by similar bands?

Similar to the instrumentation, the vocals are consistent and powerful. Main vocalist Chris Lehoux provides a thick, angry and raw performance that’s melodic enough to carry a hook, but also smeared in a rough, Hardcore influenced edge similar in style to A Wilhelm Scream. Production wise, the album hits all bases pretty much spot on. The album sounds powerful and rich, with no glaring flaws or unwelcome editing mistakes dragging it down. Drummer Jessy Boilard handled the mixing perfectly, with every instrument fitting into the bigger picture without any levelling bias or similar problems. He clearly knew exactly what sound he was going for as the production is damn near perfect, putting many sole-dedicated mix engineers to shame.

Of the many bands making up the modern Tech-Skate Punk cult revival, Fullcount have proven they have more than what it takes to stand up with, and indeed outplay, the big boys of the genre. Overall, Part Of The Game is one of the most well refined, progressive, slamming and listenable albums to have been put out this year, amidst a range of quality releases in the genre. People looking for the highest quality Skate Punk should look toward Québec, because this band have got it down.

Introducing: Not My Dog Records.