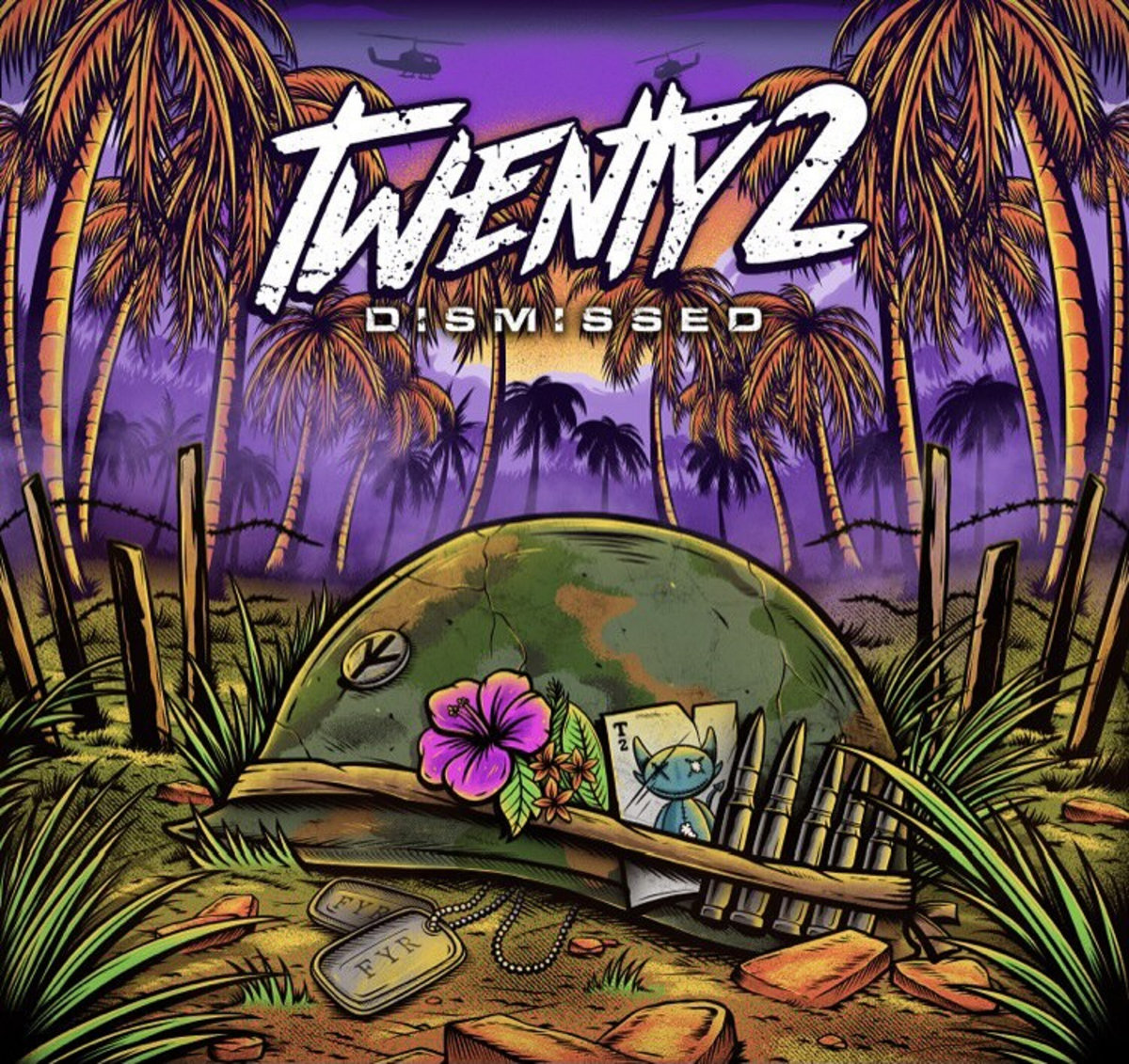 Twenty2 and Dismissed are the order of the day. A colossal amount has changed and continues to change in the modern world, doing what is right is paramount but hypocrisy permeates the entirety to varying degrees and existential dread looms incessantly over. Dismissed is the latest album from Twenty2 to discuss this ongoing pertinence and examines the far from simple and limitless nuances of this life, this time, with some help from across the border from their Montreal home.

Luke Pabich, most famously of Good Riddance, co-wrote the album and brought long-time compadre Sean Sellers along for the ride to join both Jon H and Dan Cole for Dismissed. But how did it go?

Do we really believe what we say we do? How much are we conditioned by an unlimited access to information? Coarse, determined vocals investigate this and ponder further on to what extent do some chase the “status” of aligning with a belief over actually taking genuine ownership of it. Musically, the band feed from the evergreen Sellers’ power reserves over a fast Melodic Hardcore-backed Skate Punk in a perfect balance between serration and melody, completely equating the lyrical frustration. And so passes ‘Conditioned’.

Luke Pabich’s signature meandering lines and anthemic presence on ‘Conditioned’ and then on ‘Underneath’ and its internalised maelstrom are fully at home by the chorus of the latter. Though Twenty2’s work to date is worth your time, on Dismissed, the additions of Pabich and the ever-reliable acumen of Sean Sellers coalesce with this inhouse legacy. ‘Setup From The Start’ blasts vintage Cali-Skate Punk cut with the nuances of the Québec scene’s contributions to the genre as the two melodic powerhouses collide to toast toward what unites them. Lyrically, the ubiquitous theme of screens and our onset transfixion to them provides an interesting nuance and clever turn of phrase layered over a track in lament as much as it is hopeful.

‘Grudge’ is urgent and more of the same but this time cut with an accentuated and shredded Melodic Hardcore riding the anthemic, evocative Skate Punk lines the band and indeed their Dismissed-era guitarist are known for. Think the obvious and then add the likes Oh The Humanity!, Failing Up and much of the Thousand Islands Records ilk such as A Vulture Wake and track five is in its indomitable element. ‘Grudge’ also foreshadows a harder, heavier and darker stylistic turn.

Dismissed’s track listing erases the alluring trap “fast-Punk” albums fall into regarding uptempo dependency. ‘Erase Your Fear’ rides its cycling mid-paced “heart” and heavy effort providing this welcome break ahead of a track that not only provides the foreshadowed foray into abrasive Hardcore, but talks of how progression and regression can, in extremity, mirror each other within over categorisation and doctrine. ‘Fuck Your Rules’ is an interesting observation within this sphere rather than the standardised ill-thought reactionary retort spat by the adult kid of rock, for example. It is also important to understand that there are innumerable nuances here based on geographical and cultural perspectives.

Thematically, this line continues as much as it does sonically in the seamless Melodic Hardcore of ‘Before You Save Us’. Performative acts are checked as abruptly as the privilege that also comes into question pertaining to societal progression. Do you actually believe in the badges you wear and have you acknowledged your privilege? ‘I’m (Not) Done’ then substantiates this era of the band’s acuity in crafting mid-paced melodic Punk-Rock not so devoid of clout with excellent contrast between the deep, rumbling and meandering bass lines and more of Pabich’s hypnotic and effortlessly hook-laden displays.

The invariable discussion of age and conduct relative to the term “adult” will never leave Punk and it is frustratingly present in the (expectedly) cliché but far from irrelevant ‘Adulteen’. ‘I Know It’s You’ showcases reverberating, classic Black Flag-eqsue Hardcore cut with the same band’s latter tones before crashing into and alternating between a faster ‘core drumbeat, a comparatively more melodious chorus and further Hardcore timestamps. Despite a range of higher octane displays on Dismissed, Twenty2 are often at their best when refraining from the assumed archetypical pace. ‘What She Did’ is an example of exactly how this is done.

Twenty2 and Dismissed close with ‘Out Of My Head’. Though rife with topics both removed and adjacent to such, the discussion or rather omnipresent focus on mental health on Dismissed culminates in the thirteenth offering. ‘Out Of My Head’, akin to moments already passed in Twenty2’s efforts, leans on the periphery of the legacy of sufficiently “popped”-Punk. This, importantly, is no criticism. With its ascending verse ahead of a jagged and by no means cliché heavily “Pop-Punk”-inclined chorus, Jon H yearns for freedom from cranial stress. In fact, given the varied melodic sound presented on Dismissed, ‘Out Of My Head’ closes it perfectly.

Twenty2 and Dismissed cascade through fast melodic Punk and Hardcore, leaving much to ponder. Thousand Island’s Records in Canada and Lockjaw Records in the UK and Europe are on this one, with physicals also available from the band. Find both the band and their labels below.