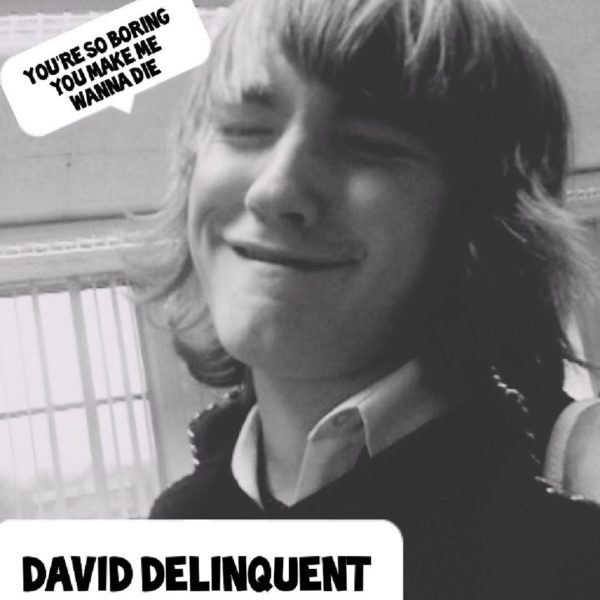 There is a lot to be said for solo-releases from Punk-vocalists. David Delinquent and You’re So Boring You Make Me Wanna Die enter into this fray. Truthfully, you never really know what a different set of inspirations or influences will yield in these cases. It can sometimes be a mixed bag and other times sombre yet unstoppable. As a little context, you can read a review of Delinquents most recent EP – Here.

If you’re a listener of the above full-band experience, you’ll know that sardonic, sarcastic and heartfelt sentiment are a key part of the Delinquents arsenal. To be succinct, there is no change here. Coming in on cheerful-electrified line accompanied by rhythmic acoustic plucking, a comical take on something more real beckons you into this three-track release.

David Delinquent’s approachable vocals are suited to their more subdued, sombre setting away from upbeat but-aggy Punk-Rock. This isn’t a scrappy acoustic Punk-Rock release and that’s a fundamentally good thing. Admittedly, the honest cathartic approach is unquestionably borrowed from such but that is all.

‘Prince Charmless’ is another witty reflection on bad-love decisions that is accompanied by playful language completely making the experiences to words that have inspired this release. David Deliqnuent may take a humourous line near-constantly, but only in a manner that makes his emotive songwriting more digestible. And, to be honest, if you’ve ever spent any time in his company, you’ll know what I mean.

The debut solo EP ebbs to a close in ‘Homefires’ and stands at its absolute best. If you’re a fan of the intro and extrospective story-telling of Sober Dave, you will rather enjoy his one. ‘Homefires’ is sombre and reflective. The track is born from an emotional struggle and yet is glossed with a lacquer of hope. Each of the three of this EP sees acoustic strings accompanied by a melodic partner. In ‘Homefires’, both a gentle and regular infusion of electric strings supplements and contrast the gentle ebb of the permeating keys that everything else depends on.

David Delinquent and You’re So Boring You Make Me Wanna Die, is a release of genuine, non-cliche emotion via Dundee, Scotland.