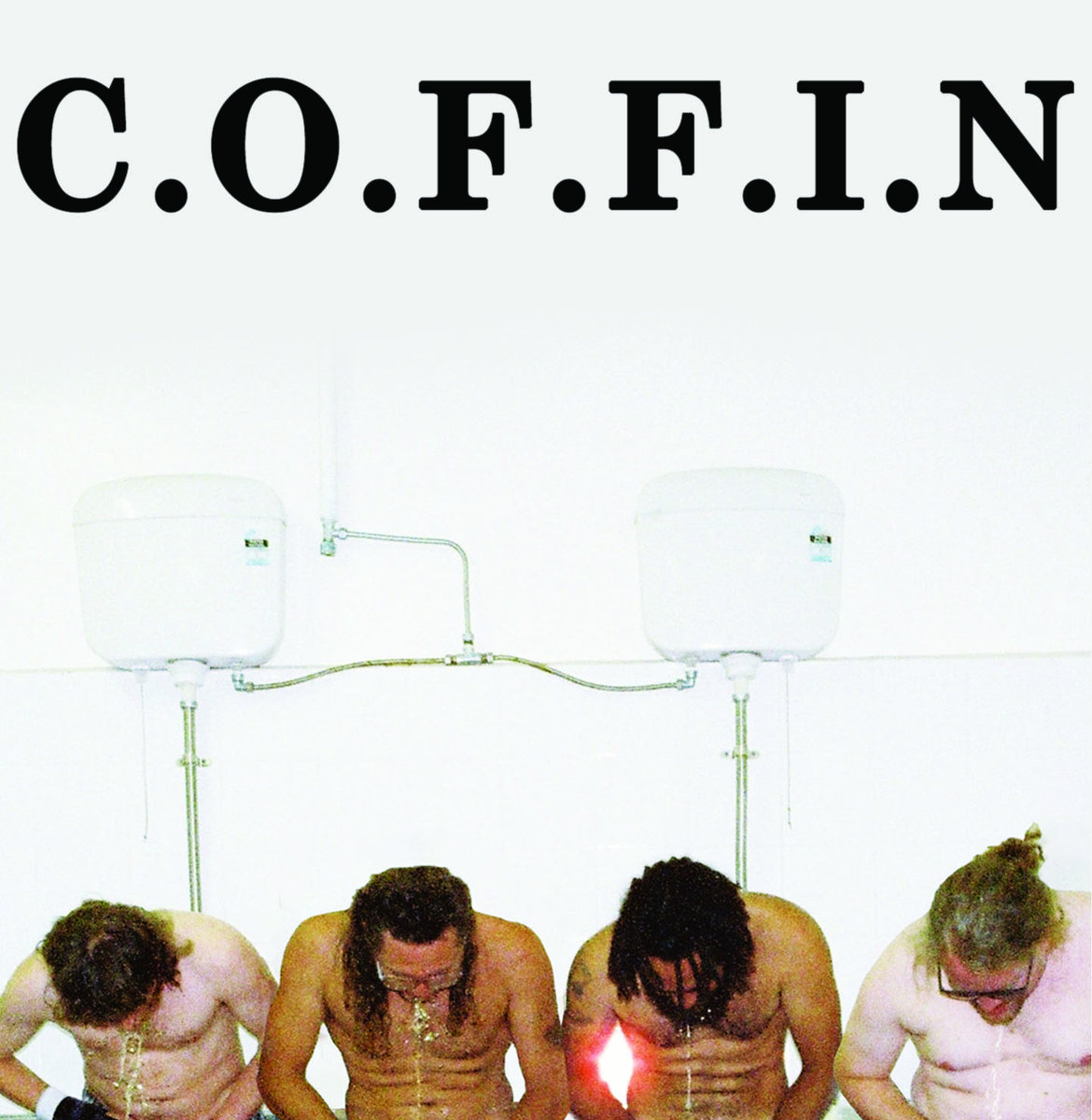 Now as much as I could leave you to do that it would indeed defeat the purpose of this sort of thing wouldn’t it? That and provide quite the disservice to another hard-working underground band. So with that, I give you C.O.F.F.I.N, a band warping a majoritively fast Skate Punk-esque sound via Thrash Metal, Hardcore and general abstract weirdness.

After the sounds of the Australian avian population and an ominous didgeridoo play you in, up-tempo melodic Skate Punk edged in Hardcore but toned with Thrash is your guide into ‘White Dog’ – ‘There’s a plan for the clan, to be a WHITE DOG but it’s a mongrel’s nation, & you litter’s filled with the filth of hatred’.

‘Nails’ is unadulterated classic Hardcore Punk flavoured with notes – or shall I say sharpened with points – clearly and lovingly reminiscent of Poison Idea or Aussie contemporaries The Phosphorus Bombs who you can dissect – Here.

‘Pissed’ follows suit with it’s intro but then falls for a disjointed, distorted yet rhythmic set of raw riffage that could contend with the best of the 80’s UK and Aussie underground Punk. ‘Pissed’ could have easily stayed it’s hand and remained in said vein but instead chooses melodic chaos towards it’s end before yet another surprise in the form of ‘Locals Only’.

Track four is perhaps the best on the release both for it’s sudden change in style and it’s dry-Aussie humour about those people in those towns we all know of. Local places for local people.

‘Pills’ is another fast and melodic track with an intro misleading past that very description. C.O.F.F.I.N keep the pace but alter the rhythm from straight Punk-Rock to raucous Rock ‘n Roll, back again and then settle somewhere in between. But don’t let that fool you, C.O.F.F.I.N are a serious band at heart and have plenty to rant about.

For ‘Between The Flags’ sitting with the lyrics beside or in front of you will help it all sink as in C.O.F.F.I.N show no matter how abstract they are or seem, they are still a band with cares. Sonically, ‘Own Me’ sounds akin to latter-day Black Flag, it’s abrasive, slow and as obnoxious as you would expect.

‘Done By The Dogs’ picks up the pace and finally provides you with the Thrash of which the band hinted of and promised. It’s needless to say that many a Punk scene is plagued by the respective police forces in the local area and ‘Done By The Dogs’ is a track well aware.

‘Furnace’ is chaotic in the underground Punk fashion and very much a call back to the stylistically chaotic 80’s but at the same time, despite is sporadic yet complex structure, derails an album at this stage needing just a little coherence. ‘King Luke’ however can be said to be answering this call but not immediately. Thick bluesy-riffs bounce to and fro until the 0:34 mark where the Punk-Rock returns, charging off into the distance on low ridden Hardcore bass-lines and classic Rock n’ Roll guitars toned for the dark side.

With ‘Related Violence’ Piss​~​Up is very much back on track. Think of it as a dark and more driven companion to ‘Locals Only’ as it joins the former at the top of the “best of this particular piss up” list. C.O.F.F.I.N’s rendition of melodic Punk may not the most obvious or tried and tested but it works and stands them well above the rest in originality.

Piss​~​Up closes with more Punk-Rock n’ Roll and it’s by now you realise how enjoyable this inebriation session has actually been. You felt a bit sick, somewhat confused and a tad melancholy but at the end you’re stood on the table pushing that air guitar to breaking-point.