The Liverpool Punk-Rock All-Dayer saw its second year this past 18th May. This time at Studio 2 Parr Street, the second coming, software version 2.0, the second rising et cetera et cetera was an event that took many months of planning, many of which that more or less made up the year following the first edition.

This second year was very much a labour and a hard one at that and with all cliches aside, it was also one of love, a four-letter word intrinsic to the very core of The Liverpool Punk-Rock All-Dayer and all those involved be it in small part or not. For the whole point of anything in this vein is very much about the music, those who make it and the community around it and that is exactly what the team behind The Liverpool Punk-Rock All-Dayer are about and will unambiguously continue to be about alongside the ubiquitous nature of Punk music and culture. 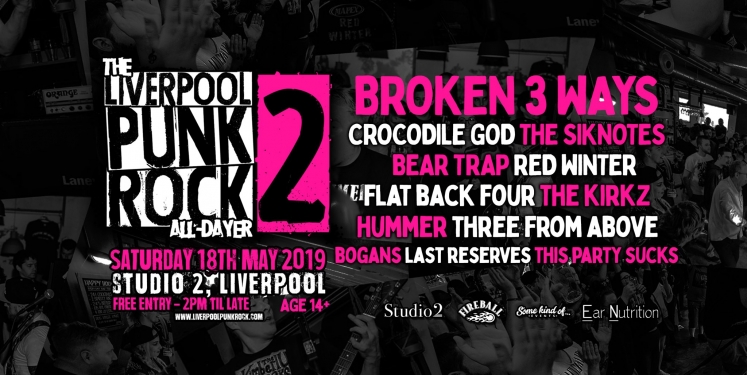 Reading these trailing drivelling words of mine may well be people who organised the event, played their craft, worked the bar and stood drink in-hand smiling, singing and nodding along in the thick of it as three individuals wormed their way through the action in order to capture stills of the day in proof of what this fledgling annual gathering had and indeed has to offer. Here are but a few of the images from the day captured the LPRAD team lens-wielding fiends. I’m keeping that.

The following photos are were captured on the day by the likes of Andy Wilson (Photoandhi), Pip Bonworth (Vërsöa) and Sarah Sidwell (Sarah Sidwell Photography), who you can find at end.

[ngg src=”galleries” ids=”3″ display=”basic_imagebrowser” display_view=”default”]The booking wing of the LPRAD team were inundated with requests for the first edition of the All-Dayer in 2018 and it was in no way different this time around. Twelve bands showcasing many of the feelers set out from the initial growth of the abrasive perpetual being that is Punk music were the treats of this day, all set to ail the groans of the working week prior. From the classic Pop-Punk of This Party Sucks onward to the late 70’s-early 80’s Hardcore cross of Last Reserves or the attention cementing Skate Punk of Bogans, within the first three of this twelve-band-treat the LPRAD 2 All-Dayer very much began as it would go on.

The purpose of this isn’t to bore you with an in-depth review but to say enough and present enough visual-delights (particularly Adam Wright from Bogans) to prompt the thought – ‘do you know what – I might give LPRAD 3 a go next year‘. Not like that though, that exact string of words has been copyrighted EN 2019… I digress, the day showcased the highs and lows of underground shows. Technical difficulties were rife but were dealt instantaneously either through bands that either had or hadn’t played fixing mic stands mid-set, lending guitars, cabs, amps and even their entire bodies for up to three (and a bit) sets. Liverpool natives Three From Above and their precision Garage Punk n’ Roll were the true heroes of the day, as despite being plagued by the most difficulties, they delivered a set comparable in quality to one without the hiccups. Hats off.

[ngg src=”galleries” ids=”5″ display=”basic_imagebrowser” display_view=”default” template=”default”]It was a day that left all those involved absolutely knackered but smiling and sad in the best possible way the day after. The staff of Studio 2 Parr Street, for lack of a better string of words, absolutely smashed it throughout the venue, the crowds of the day were the very best (with some travelling from across the UK and as far-flung as Finland) and of course the bands, the bands! Punk was shown across the board with (more) heroes of the day such as Will Atkinson performing three-full sets and joining bands for even more afterwards! He’s only in a few of the photos, just a couple. On the other hand, others had overcome serious health issues to be present and in two cases even play, so once again, hats truly off to you!

The true (slightly but welcome cliche) affirmation of a community Punk show was seen in the token but always needed and warmly welcomed cover of ‘True Believers’ by the Bouncing Souls and between them the bands showed nothing but support for each-other as classics from the Punk world were played between sets as all-around conversations and laughter permeated the particular microcosm of the scene so wonderfully present! Anyway, have some more photos and we’ll see you next year.

For the full selection of photos from the event and any inquiries, find the lens-wielding fiends below.