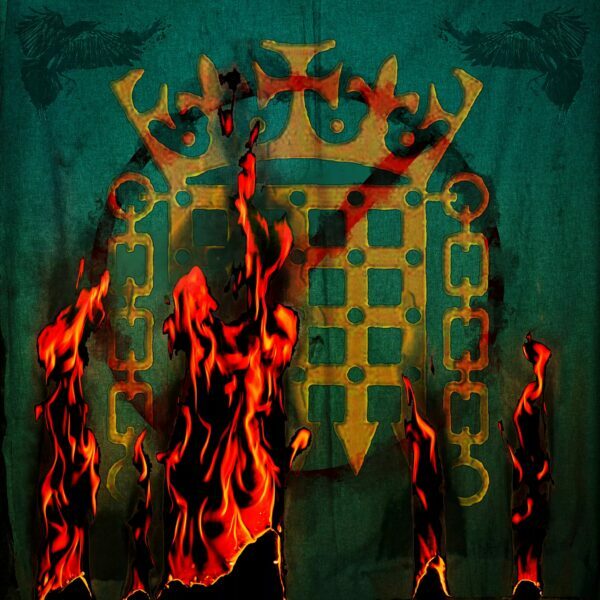 For all the poignant and inherent politics of the Punk scene, Broken Calling and ‘Redemption’ enter 2020 as something of a reminder. A crucially targetted and jagged punch to the face with a sole purpose. One to show that political disdain and anti-status-quo rhetoric is alive and well within the Metal scene. That, and a defiant stand against the stereotype that Metal’s infinite deviations are slaves to lavish gratuity and banality-ridden theatrics alone. Spoiler alert! There’s more to it than that. Far more.

Broken Calling hail from around the UK south-east with ties to both London and Dover. The five-piece, for a little context, have been sonically lacerating through the underground Metal scene since 2019 and their sound is well-versed. The Nu-Metal days we all remember have left their mark, as have the trappings of Metalcore a decade later. Broken Calling crossover the aforementioned but still have a healthy respect for the traditional. Finally, before we begin with the UK-COVID-centric ‘Redemption’, it is fitting to highlight the proximity of Metallic Hardcore to the Broken Calling sound.

The band call back to a time where many now in their late-twenties to early thirties were first discovering heavy music and those younger were living in its legacy. The intro of ‘Redemption’ is seamless and brash within seconds of early-2000s grit cut with modern production. Throughout their career, Broken Calling have vocally traversed archetypical Metal but have also encompassed that of contemporary heavy music. The band’s front and backing vocal tones, shouts, screams, gang-shouts and all are heavily versatile across the Hardcore and Metal spectrum, bridging that gap between the genres. Outside of the music itself, this is what stands the band out far away from complacency.

Inside of the music, however, Broken Calling still connect a thin line to the outside. Broken Calling merge the anthemic Metallic Hardcore Of POLAR via playful, yet rhythmic chugging coming to a head with juxtaposing melodic leads. The band’s verses retain their Metal-founded bite but the influence from Hardcore cannot be ignored. By the time of the chorus, Broken Calling have already traversed more than one base level genre. They began on the Metal-offshoot that inspired much of their age group. They then fell into the rhythmic plod edged and teasingly contrasted with melodic strings and finally found a balanced amalgamation. It is fitting then that the defiance of the chorus is comprised by this full drive toward Metallic Hardcore and an anthemic chant against the backdrop of Conservative and COVID contemporary Britain.

Regarding the band’s Metal, ‘Redemption’ is rounded, reserved and controlled compared to the majority of their past material. Now, in some ears, this would be a cause for concern, however, Broken Calling anticipated such. For, post-2:00, the five-piece alternate. This half-way point, despite the resurgence of their anthemic Metallic Hardcore encouraging resonation where required, Broken Calling fall back on what they know. Post-2:00 the band’s catharsis takes a darker turn into classic but ferocious Metal-riffage as the true abject fall of the now is felt. Broken Calling alternate between vicious spitfire vocals to a brooding rage gutturally expressed through a low and menacing growl. Metal is indeed rife with theatrics but to fallback unto my earlier statement, there’s more to it than that. Broken Calling are a Metal band foundationally but under no circumstance have a need to self-gratify such in a grandiose manner.

‘Redemption’ is a political Metal track that presents itself as intrinsically as it can. There is no bullshit here. COVID, governmental double standards, blame and even Grenfell – ‘Redemption’ is weighed down by the history of its line of sight. Broken Calling much akin to population, are worn out and stretched, and this latest single was always going to be a sonic representation of this combustion.

Broken Calling and ‘Redemption’ push beyond cliche and show that underground Metal can be political too.