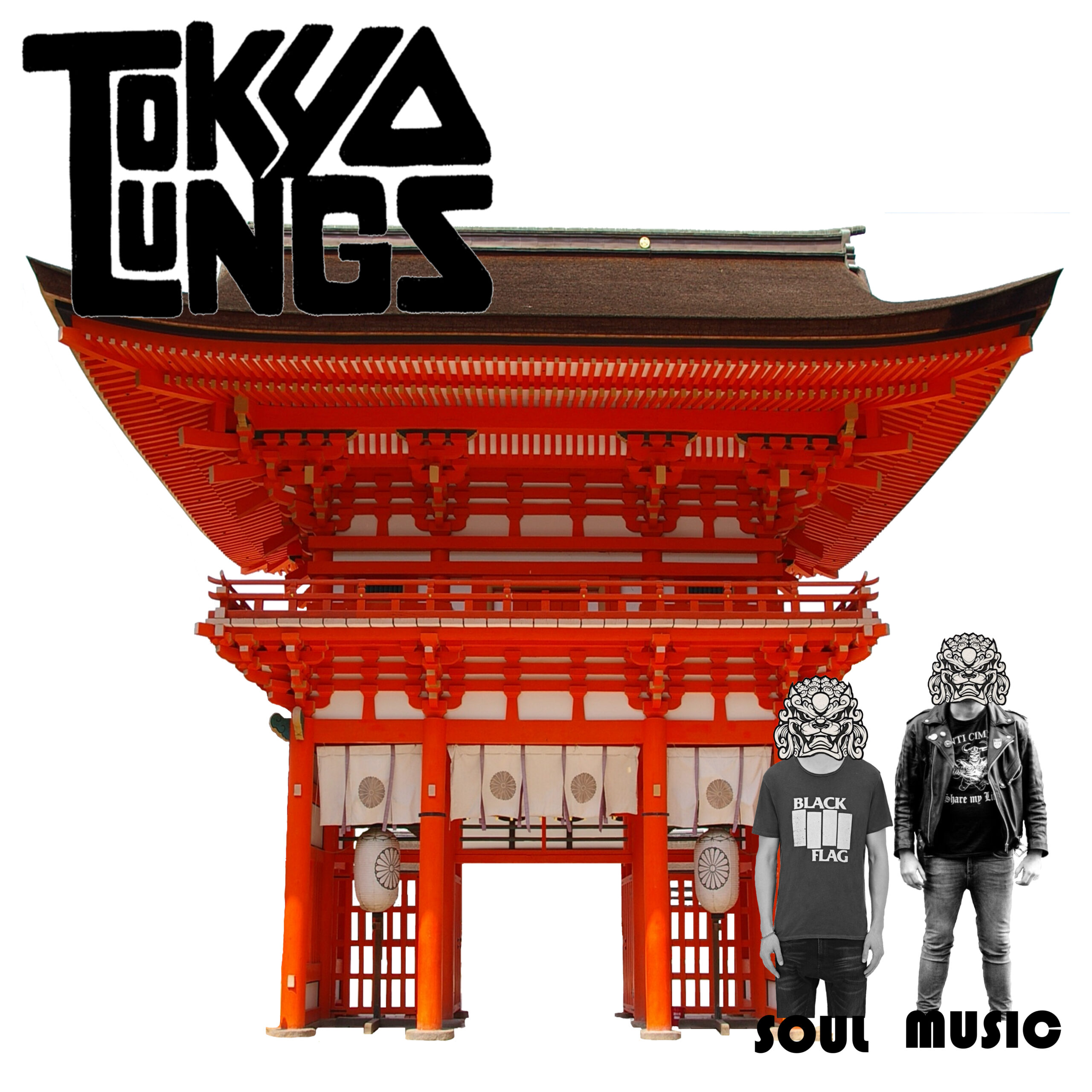 After a well-received debut EP consisting of nine songs in eight minutes, it is obviously only right for Tokyo Lungs and their Soul Music to debut their full-length self in a ripping nineteen minutes dispersed between TWENTY-FOUR tracks. I know what you are thinking and yes, of course this is another Kibou Records-born band of onset Hardcore. I see you Amok Records, you’re in on it as well. Here – you can find a full review of the aforementioned Self-Titled.

Tokyo Lungs may only be a two-piece, but their combined back catalogue is a voraciously vehement and veritable mass of combustive rage. The most notable being both The Domestics and Casual Nausea but I will also add the likes of PI$$ER, CABRO, Bring The Drones, Hazard Profile and KÖRD VÄRLD. I could absolutely supplement this list with more of course, in the very same way that I could also sequentially cascade this review through each of the twenty-four blasts ranging from 0:26 to the contextual chronicle of 1:11. Alas, I won’t. Not only for yours and (a little) of my own sanity but more for the very reasoning that this record isn’t just a record, it’s an experience born from the frustration of the past year-plus.

To say that Simon Battery’s drumming is fast is to effectively equate it to the definition of snail-paced. Tokyo Lungs, akin to much of Kibou Towers output and that of anything genealogically linked to The Domestics, is beyond simply fast, quick or spritely. In fact, if “spritely” was to only subsist on cocaine ingested to a precision-cut schedule so that the high would be never lost, then the word would be useful. That’s not to say this album is the same tempo throughout. Being Hardcore Punk, Soul Music contains some repetition but not to the point of abject banality. In fact, both ‘Breakdown’ with its classic, jabbing Punk akin to The Clash if they had been a Hardcore band, and ‘Lockdown’ with its perpetually cycling, recycled energy make for two bonafide highpoints. While the fluid ‘Lethargy’ on the other hand, confidently straddles Tokyo-fast and Tokyo-fast-but-not-quite-as-fast with ease.

It is important to note that, even the fastest contingents of this record are rife with ironically calculated deviation. Fast isn’t just fast with this band, if you’re to use that term that is. Does is it need to be stricken from the common Punk-centric vernacular? Quite possibly! Relentless is better anyway or perhaps tenacious? You decide.

James Domestic’s vocals are as expected, they deviate somewhat but his far-from-forced snarl is at its usual best. Regarding the meaning of his maniacal vitriol, however, that is where Tokyo Lungs, akin to their debut, laugh in the face of complacency. Soul Music does very much that and set to a detestable backdrop. That of the contemporary and rapidly hurtling spiral into proto-fascism. The prevailing drive of anti-intellectualism, mental health and of course, the inextricably linked pandemic. Soul Music is the societal-watch party of the modern age in the style that Punk has always championed, that being the art of the intelligent but openly pissed-off intro and extrospective tirade. Although the record as a whole couldn’t be any more emphatically bare-all and topical if it tried, tracks twelve-through-seventeen are of particular note. The wonderfully angry humour of ‘Everything You Hate Is…’ is the absolute best of this crop.

Though Soul Music is far from the melodic brand of Hardcore, the band edge their rhythms in a subtle melodic-esque coat from time to time. It is very easy to pass off albums in this vein saying “it all sounds the same”. Such is indeed common rhetoric but here, it couldn’t be more wrong. Tracks such as the penultimate ‘Worn Too Thin’, the musically stand-out ‘Lockdown’ (again) and both ‘Rat Cage’ and ‘A Knife In My Back’ stand tall. I could list more and specific points there-in but the point here is that though subtle and quick-fire, Soul Music is keenly aware of when it needs to alternate and contrast.

And that is all I have to say at length on Tokyo Lungs and their Soul Music. It really is an experience and a masterfully raw Hardcore Punk display of such at that. Soul Music releases on the 23rd April via both Kibou Records in the UK and Amok Records in Germany. You can find all you need as well as pre-orders below. I need to lie down.