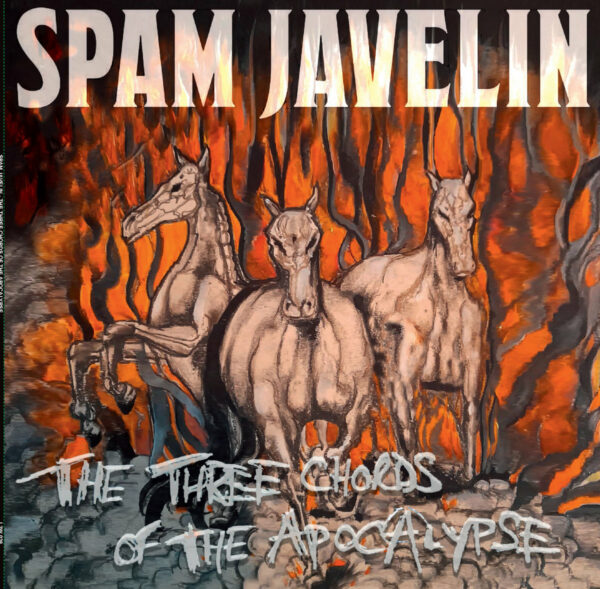 How does one introduce Spam Javelin and The Three Chords Of The Apocalypse? That is the real question befalling any attempt at literary description or promotion. However, it is a question I can’t really be fucked with for too long so I shall say this. Spam Javelin are a three-piece band from North Wales possessing as much Punk-gusto as they do a warped, wonderful and weaponised sense of humour. This is a band living the abstract hilarity and unrestrained sense of “fuck it” that their name implies. Are they perhaps the specialists in projectile animal products? Do they rule the residency when this comes to Spam? Again who knows but all this waffle is simply an effort to introduce the real reason for this article. That being Spam Javelin and The Three Chords Of The Apocalypse.

Spam Javelin’s for the most part classic Hardcore made its mainstay debut in The Crack Whores Of Betws Garmon. ‘Shit You Don’t Need’ conveys a sort-of contemporary nihilism humorously focussed on the consumption of the modern human. Spam Javelin splice Punk-grit with reverberating groove before driving forth on Hardcore bass chased by choppy classic Punk drumming and jabbing rhythms. Do we need any of this crap? Are we really choosing any of it? The very magnum opus of track one is laid bare post-0:58 and it’s terrifyingly apt.

Spam Javelin are widely known for falling into fast-Hardcore Punk and heavyset catharsis. However, it is in tracks such as the second that the band embody this gusto and veracity with their words alone. In short, we live in mire of xenophobic populism and obsequious patriotism and ‘Herd Impunity’ is the far too common sad truth.

‘God Bless America’ recounts the methods of one orange despot and his legacy of hatred. This is purveyed via more classically toned Punk-Rock weighted down in the vein of early-Hardcore. Spam Javelin perpetually simmer on the edge of the boil musically while vocally, lyrically and via their conviction, bubble over. ‘God Bless America’ is grounded by its resolutely powerful bass tone, teasing a heavier band while a discordant yet further vintage and melodic lead is the contrast to this looming power. ‘Children Of The Shoe’ finally unleashes their (notably precise) Hardcore, however. Spam Javelin manically crash through track four before retreating into more uncomfortable truth. 2020 was a year where much came to an ugly head and The Three Chords Of The Apocalypse become a fitting soundtrack.

‘We’ve Made Plans For Nigel’ sees the return of the looming bass as the band build toward wishful homicide and in one of the best on the record for the very reason that it exists. ‘You’re A Sanctimonious Prick’ is self-explanatory and a testament to the from-the-ground-to-mouth observational lyricism of the band, while the Black Flag/OFF!-esque ‘Fuck You’ stands as the natural successor. Spam Javelin are nothing if not entertaining in the most serious fashion. ‘Fuck You’ is also another example of the variety of the record. This forthcoming album may have staggered its instrumental drive but by the halfway point, such a move is substantiated.

The Three Chords Of The Apocalypse is an album born from our societal mess and whatever was pissing Spam Javelin off the most at the time it was penned. ‘Joy Division Tool’ in its modest 0:35 is very much that. ‘Super Twat’ keeps this mantra, cementing the sarcastic, sardonic and socio-political wit of the band as a bonafide strength. ‘More Shit You Don’t Need’ further mocks the normalised nature of indoctrinated consumption over the band’s most melodic Punk yet beset with a sharp Garage Rock flair sautee with a slight hint of The Clash imbued with the maniacal way of Spam Javelin.

‘The Wonder Kids’ mocks faux-interest over another deep-cut of classic low-ridden Hardcore. All the while, ‘I Used To Be A Punk’ acts as a contender for the best of this apocalyptic soundtrack. Track twelve furthers the era laid-down by its predecessor but this time focusses increasingly on the contrast it laid from classic Punk to its aggy spasmodic self. However, despite its standout effort, this isn’t the true power of the track as a whole. “I used to be a Punk” is a sad sentence to hear and Spam Javelin have taken to writing a UK-centric song to air such a frustration. Twelve is so relevant it hurts.

‘Cogged Off’ follows the classic Punk-Rock tradition disguising disdain behind an exuberant drumbeat. Spam Javelin take a notably more Garage Rock approach explored on The Three Chords Of The Apocalypse and further cement it in their repertoire. ‘Cogged Off’ is upbeat and again, notably spasmodic with a lighthearted tone to contrast and acentuate the real warning. It is also important to state throughout the record that despite a varied and lighter tone moving away from the band’s foundational gloom-core, it is never truly gone. 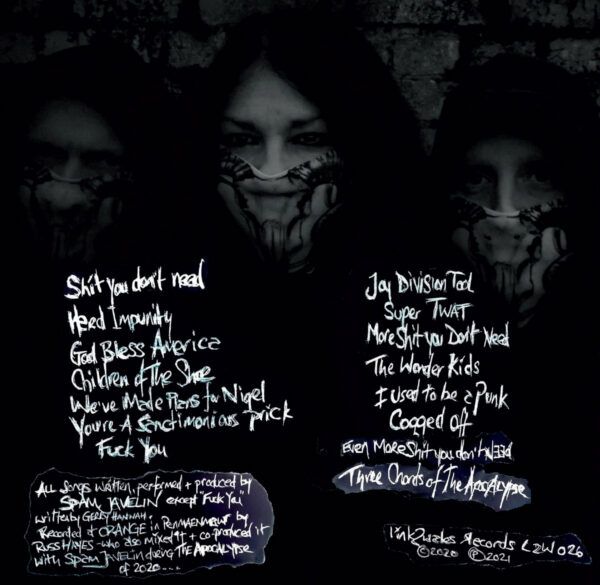 ‘Even More Shit You Don’t Need’ is the end of an entertaining saga of consumerism and I must take my hat off to Spam Javelin. The Three Chords Of The Apocalypse ends with its finalising eponymous 3:43. Track fifteen ebbs over the ubiquitous droning dystopian tone Tracey Howarth has championed throughout. Spam Javelin have been saying what we are hopefully, no matter how inherently grim, been thinking for years now.

The band end a record that is not as clean cut and stylistically consistent as the previous. On the surface, this could be argued as a criticism but within a millimetre of more depth, it can be cast aside. The Three Chords Of The Apocalypse toys with the band’s sonic-being. Spam Javelin throw their all into The Three Chords Of The Apocalypse. The grim, sad-smiling sense of humour and intelligent song-writing are unfathmoably enpoint, resonating and digestible with ease. The band’s “usual” is refined, distributed and then blended within a greater Punk sound that leaves absolutely no intensity deficit.

Spam Javelin and The Three Chords Of The Apocalypse can be preordered now below.