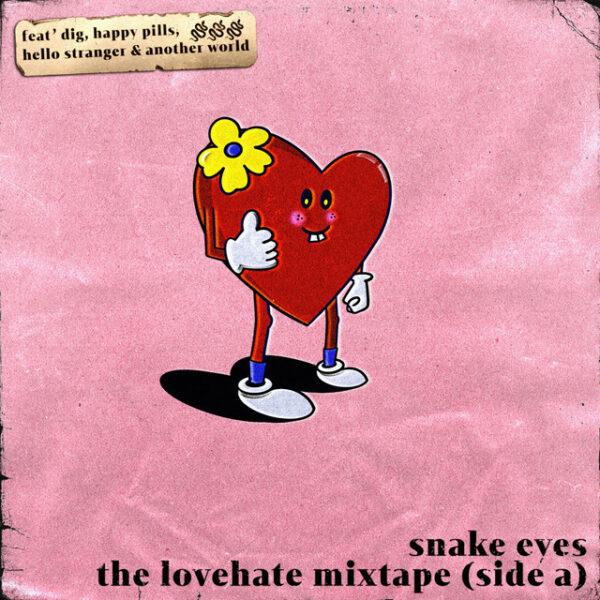 snake eyes and the lovehate mixtape (side a) almost, very nearly, persuaded me to type this whole review in lower case. However, because I’m obviously a huge and obsequious stickler for the rules of grammar, I won’t. I joke. I may know some fancy words but that be it. There’s no real skill in my sonically-focussed-literary-mind-splurge.

Bullshit aside, it’s not been long since the Brighton band released their second EP that will seemingly (keep reading) have a “side b”; so here we are. I had always meant to electro-scribbly-tap some prose pertaining purposely to their inherently fuzzy self-monikered “grit-pop” but it never came to pass. So with that said, go and track down their 2020 debut skeletons ep.

There’s a lot to be said for three-piece bands. Their comeback has been forthright, shameless and sorely wanted for quite some time. There is something charmingly indicative of pure DIY Rock in such a format and that’s what ‘dig’ gets on with. The casual, pseudo-disinterest that Grunge laid at the feet of underground Rock in the ’90s merges with the band’s “grit-pop” in a melodic, yet poundingly heavy and abrasive 2:43. There’s an effortless and sentient power in ‘dig’ and it completely does what it wishes, which, in this case, is to own the fantastically and bludgeoning-ly (not a word) playful tirade that is the last 0:49.

‘happy pills’ coats an angular riff in a melodic yet mildly discordant gloss. A buoyant bass-line and tone that takes full ownership of the argument for three-piece underground no-frills-rock follows as it is chased by an exuberant and excitable drumbeat. ‘happy pils’ carries over some of the urgency seen on the debut whilst still maintaining the casual comfortability of snake eyes now and ‘dig’ specifically. ‘happy pils’ takes a sardonic look at the all so common “happy pils” people of all ages depend on. The band’s low bass maintains and propagates the sense of dread of forgetting or missing one while the groove-inducing drums yet still chase the juxtaposing mood of the soaring lead. ‘so-so-so… done feeling rotten’. Two is a fun yet cathartic and natural cranial release.

There’s a playful side to the snake eyes ensemble. In some ways, it’s the gritty-cheery side of Grunge and in others, it’s an inherent Indie-Rock quirk. In ‘hello stranger’ it’s a hybridised both. Track three, despite having the shortest duration, is likely the band at their straight-running best. The Indie-isms subside quickly but despite existing for a short time, set up the stripped back and satisfying harmonic simplicity of the majority of ‘hello stranger’. The mighty three-piece format rises with casual ease.

‘another world’ tells a story of exploration through someone who is unlike the others. The opening and almost Psych-Rock wobble introduces an eventual and notable two-part vocal and Indie-esque shoegaze amble, as finite layering leads to exactly what you expect. There is but a short stop-start tease upon the way but the full-wack snake eyes power level dominates as you’ve come to expect and that is by no means negative. Their increasingly warped nature triumphantly closes side a with the band’s heaviest yet whilst subtly teasing both a darker and more progressive future.

That was snake eyes and the lovehate mixtape (side a). Now for the “and more”. On the 19th of November, snake eyes are releasing the accompanying (side b) to the lovehate mixtape digitally and physically along with merch bundles and it doesn’t stop there! Prior to that date, the band are playing at the Til The Wheels ‘Til The Fest 2021’ at 16:40 (4:40) on Sunday the 10th of this month, at the famed (The) New Cross Inn in big old London. There are still some tickets left if you are in the area and are able. I hope to see you there! 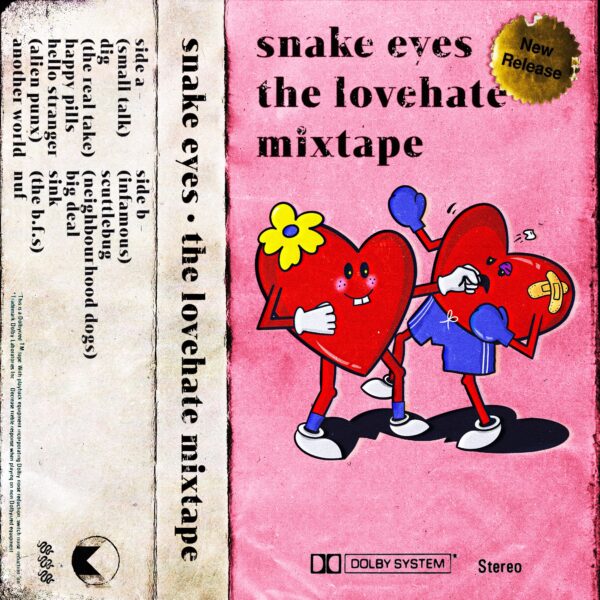 That’s all from me. You can find everything you need pertaining to snake eyes, Til The Wheels and Til The Fest 2021 below, including the love-hate mixtape pre-order and pre-save.