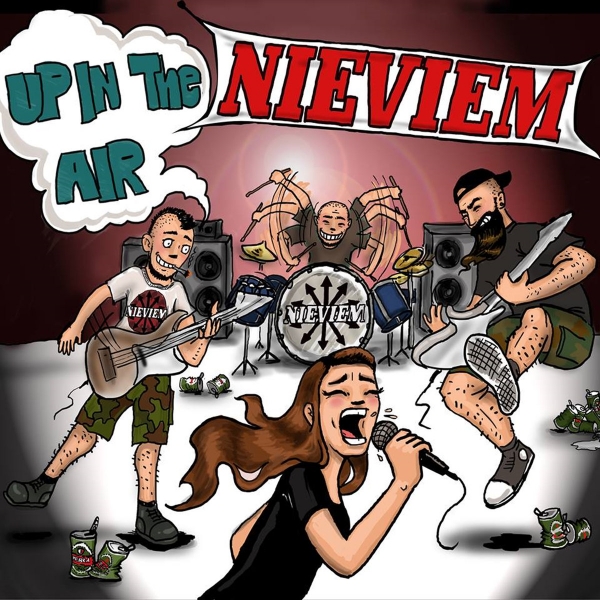 Skate Punk and its global never-ending presence is very much that. As a standalone statement that is very much not news at all and may seem redundant and arguably is; unless you pair it with the fact that the genre’s exponential growth and now varying various stylistic sonic-assaults has been and indeed is at the forefront of the contemporary Punk scene.

Nieviem are very much a crucial part of this movement, growth and scene. Comparatively to I don’t know how many household names, the band are admittedly smaller in stature but in a manner that would be rather idiotic to ignore. The 2017 The Hope Is There EP offered instantly addictive refreshed classic Skate Punk via not North America but the (probably raining) midland city of Lincoln, where the medium was warped into a scrappy, melodic, lightly-shredded rendition comparable in part to early Strung Out, Pulley and again, a myriad of other household names.

Up In The Air, the band’s third “main” release, very much sets its tone and purpose within moments of vintage rhythm and break-neck drumming. Hope Bateman’s dry, disinterested (in tone) yet determined and disaffected vocals are in full-force as expected. They are very much there to perform a service and do so dryly and sardonically. ‘Monkey Tamer’ teases heavier climes via its guitar-tone and short bursts of metallic screamed-vocals as you wonder whether such an aesthetic is to be release wide.

Back in the day, Strung Out almost overnight began to heavily infuse Metal into their sound and it’s here you realise the slight arguable Hardcore tone of ‘Monkey Tamer’ may well have actually been far more inclined to this out of the box influence instead. Think The Element Of Sonic Defiance or Exile Into Oblivion and you will almost certainly understand where Nieviem are veering towards in an utterly satisfying darkly-toned hurtling pace. Said dark stylistic is perhaps most notable when paired with the topic at hand within ‘Up In The Air’, itself very well articulated.

‘Austeritory’ is a song born from the very ridiculous nature that is the UK political climate, a topic that Bateman’s vocals very much suit. Flashes of melodic guitars assist the thick jagged contemporary (yet Pennywise-esque) riffage-refrains providing rest-bite that is in actuality nothing of sort. All of this sits between more classic charges of very satisfying cathartic classic Skate Punk. Contemporary classic, classic contemporary.

The early 2000’s saw the rise of Melodic Hardcore with the likes of Rise Against and Strike Anywhere reinvigorating the Punk scene and ensnaring the young fans who are now “all grown-up” and still championing the scene today. ‘Filter’ is very much an ode to this and an excellent performance from the bipedal being pummelling the skins in a fashion fans of In Evil Hour will undoubtedly enjoy.

‘Filter’ closes the the typical studio tracks without any real criticism in sight before a live rendition of ‘Up In The Air” where the band sound even more enticing as they lay down and credit the reasons you already have for wanting to see them live. This  enticement then turns into smiling adoration as Nieviem close with their own variant of the stage-invasion classic ‘Bro Hymn’ by Pennywise.

Up In The Air is out now (bandcamp only).