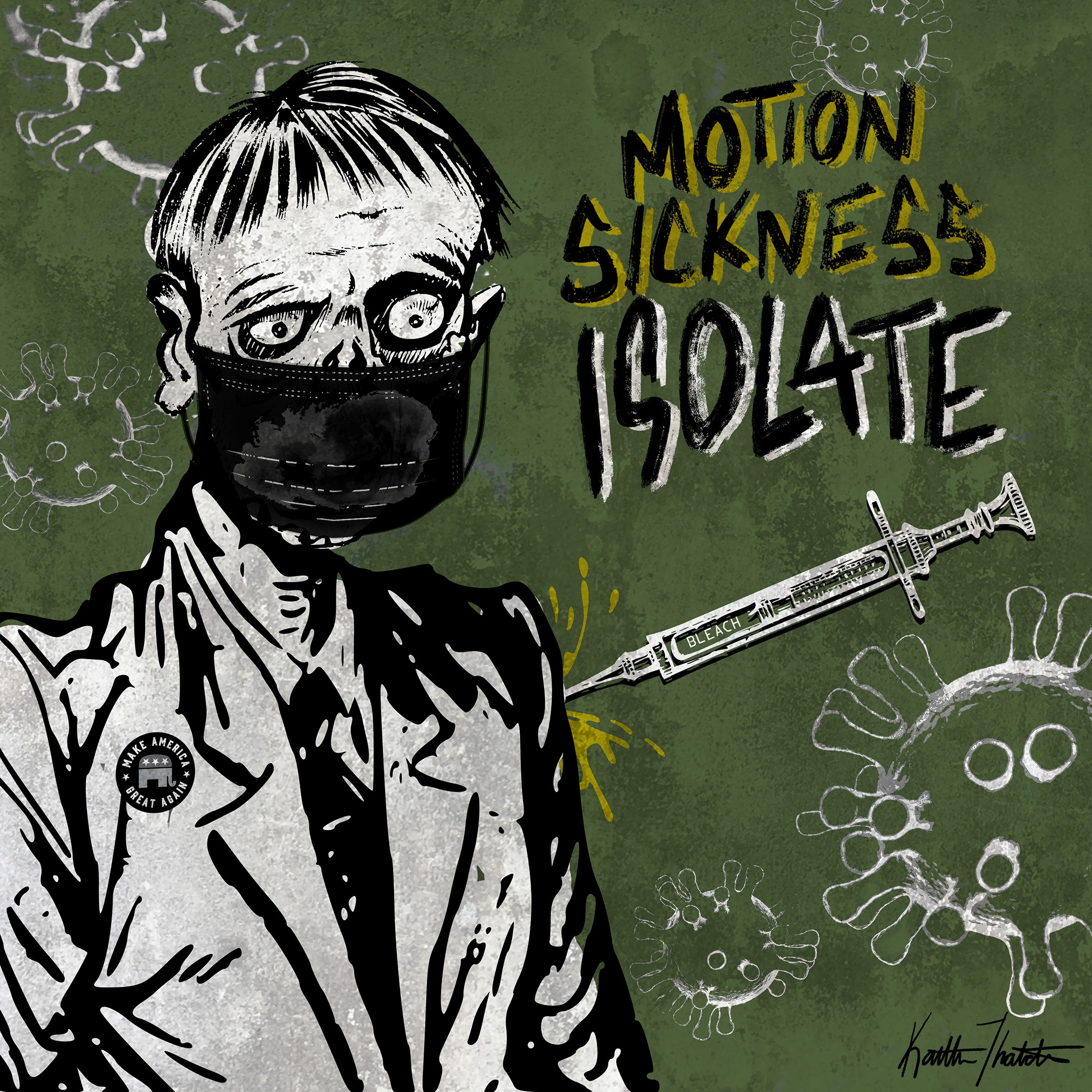 The musical medium of Punk-Rock is and always has been one unto which disdain is cathartically expressed. Motion Sickness and Isolate, through their very existence, enter 2020 riding high upon such via Hamiton, Ontario. Motion Sickness move through thirteen songs in sixteen minutes via such an illuminated disdain of the now that surely through those very words alone, you must be keen to ascertain how that went. Well then, how coincidentally fortuitous it is that I’m about to tell you of said: “went”.

Firstly, I feel a disclaimer is necessary. If it wasn’t obvious, Isolate is defined by the tempo of which its socio-political uppercut collides with your face. That, or alternatively the personified face of 2020. ‘And Now For Something Completely Unnecessary’ opens an album of prevailing, permeating dread, anxiety and various sardonic statements then importantly juxtaposed with a glimmer of hope. Track one takes stripped-back, melodically-led and mildly-technical Fat Wreck-esque Punk pertaining to these very feelings. That and a momentary a humourous jibe at something to do with bleach and a sentient Fascistic orange. ‘Bat Shit Crazy’ boats 0:55 of marginally harder Skate Punk with mild 88 Fingers Louie-esque-isms as the band’s melodic approach butts heads with an onset OG Melodic Hardcore grit.

Ah, “The Karen” what started as a haircut and morphed into further variations has now become the poster-title for the ill-advised specific entitlement of the white-middle class. ‘Karen Vs Walmart’ tackles these very people and hints at their damaging adherence to the exact frame of mind that is not the least bit preferable during this pandemic. Motion Sickness and Isolate continue their dismal 2020 anthem. ‘Karen Vs Walmart’ further pushes this comparatively abrasive penchant further as it moves into ‘Nothing But A Nightmare (Sorta)… Sorta’ to the count of ‘1, 2, 3, 4!’. Track three, though one of the album’s shortest, equally depicts something else the pandemic resoundingly doesn’t need.

‘Friends Until The End’ rumbles and chugs along to a Bad Cop / Bad Cop-ism that doesn’t go a miss. The track tackles lockdown-madness via straight-to-point Punk riding a meandering bassline and tone that even after all this time, sounds as fresh as it did at inception. Motion Sickness are to be commended on the track-listing of Isolate. The band’s overall stripped-back Skate Punk sound could easily crash through these sixteen minutes. It could indeed and be done with it but it’s an album selling-point that it doesn’t. Instead, through leaning on both the comparatively lighter and heavier wings of their ensemble, Motion Sickness employ a subtle variety. Post-spider-relations and pondering loneliness, ‘Chaos At The Dinner Table’ causes a cataclysm of Hardcore Punk in a modest 0:38.

Karen returns in ‘Karen Vs Dr. Fauci’ as the band push and meld their Melodic Hardcore penchant with Frenzal Rhomb-style adrenaline and momentary NOFX-esque harmonies. Stupidity and pseudo-superiority is just as infections as COVID-19, apparently. ‘Good2Talk’ is very much the “real talk” of Isolate. The records COVID-sponsored existentialism reaches its anxiety-ridden mental health combustion and is beyond resonating. ‘Just Another Opportunity’ crashes through further jagged adrenaline and akin to its predecessor, is an album highlight.

‘Black Lives Matter’ is a looming instrumental complete with a sampled truth too many forget and doesn’t need my explanation. ‘I Can’t Take Netflix Anymore’ is titled unto what I would assume to be an exclamation of gargantuan use this year. It is here, that this lockdown album via its production, approach, and the band’s vein of Punk-Rock meld into a release that you’d have to be mired in incredulity to regard negatively. Track twelve is the last foray of a very busy Karen. ‘Karen Vs The World’, the longest on Isolate, is another lambasting Punk-number collecting some of the worst attitudes rife with more face-palm inducing capabilities that you can palm a face at.

Isolate is a debut full-length that captures why Skate and melodic Punk-Rock as a whole, has endured. This isn’t an idiosyncratic blast of musical-pontification or comprehension challenging technical Punk, but something natural to its inspirations. Motion Sickness capture the grit, the melody and the foundational appeal of the genre while moving unhindered through the calamity that is 2020 in unabated catharsis.

Isolate closes with the best of itself, through a track I can image was hard to write. ‘This Could Have Been Prevented’ is crooning, anthemic, breakneck and beset with emphatic reality.