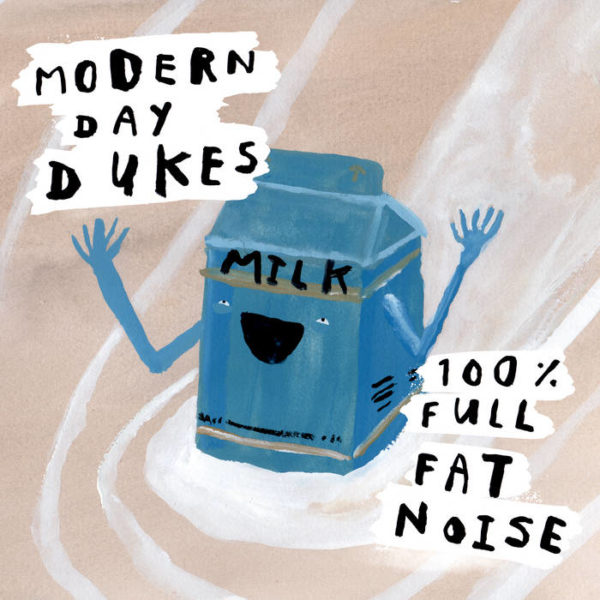 Regardless of what it could be about, the title of Modern Day Dukes – 100% Full Fat Noise is enough to force anyone out of automated mindless scrolling. Is that how you found this piece? Be honest now.

Anyway, the band, who hail from Leeds, Sheffield and elsewhere aren’t your average guitar-driven outfit, for although they bring the riffs, they do so in such a way that unorthodox only just covers it. Perhaps, for the quickest and easiest digestion, it is best introduced and described via the band’s own literary prowess – ‘Bass and Keys and Bass and Drums. Some vocals.’ That’ll do nicely.

The band decide to begin their debut album with the warped, synthy, almost hauntingly weird ‘Company Anthem’. The tracks simple instrumentation more than suitably suits itself and the abstract underground Rock on offer. You’re intrigued, though, I bet it worked? Intrigued and indeed clearly in need of some cathartic groove riding on the back of ever-so-low hybridised Grunge-Hard-Rock and melodic vocals rife with attitude as much they are welcoming melodies. ‘Liability Friend’ is a song that could only sound as it does because of the band behind it. Find it one of our house playlists – Here. I would also recommend you add a band by the name of Brain Ape to your list if MDD are already becoming a favourite. Do so – Here.

‘Go’ is a Pop-song filtered through MDD-brand brooding Grunge and groove-laden Hard-Rock. Perhaps “Dirty-Pop” would be the best description. Despite the band’s obvious penchant for sing-a-long-guitar-party-music, there is such a brooding, dare-I-say Punk-esque attitude to this music that hits you powerfully. Like a danceable blunt-force trauma if such a thing were to exist.

‘Film Noir’ is one for the riffs lovers. The dual-bass-axes pair with thundering drumming as they provide the foundation for a simply contrasting plod of keys. Again, an applicability and Punk-esque delivery rule the verses while more warped-Pop and dirty basslines populate the simple chanting chorus. ‘Tourist’ is a slow ebbing contrast and adds new light to the vocation of being such in a distant place and stands as an arguable album highlight by miles and miles of truthful cleverness.

Much like ‘Tourist’, ‘Spent’ was a forerunning single. The track is as gratuitous as its overt double-low-bass time and if the aforementioned is your jam, see a band by the name of mr.phylzzz – Here.  The band aren’t a Stoner Rock band per se but with ‘Spent’ they absolutely could be. Between 1:55 and 2:46 before the vocals resume, auditory proof of the band having fun is laid bare and is beyond satisfying. Faulting this band is indeed proving difficult.

Rock n’ Roll keys? Why not?! ‘Brand Loyalty’ sees this alongside yet another coming of riff-mass. Modern Day Dukes employ what could almost be attributed to vintage Post-Hardcore stop-starts over interesting lyrical-imagery before heading into more low and slow Hard Rock to close. The band’s vocal efforts shine more and more as the album thunders along and ‘Brand Loyalty’ sees them at their unambiguous best, from subtle harmonies and high-notes to screams and conviction, track seven has it all.

‘Okhrana’ despite its topical focus is entertaining the most melodic of the band’s efforts so far while still maintain the overt reverb, gritty and heavy-set sound. Are the band simply talking of history or are they distantly implying parallels? Who knows, but the history student in me enjoyed it. ‘Low Calorie Groove’ is good for your health with its satisfying opening chord-progression and ensuing easy-burn riff-calories. It’s also the longest on the release and by far another heavily enthralling listen. This is especially the case as the keys feature far more prominently en route to poppier climes.

100% Full Fat Noise closes in the very manner of its name with ‘Blum’. The closing number contrasts its predecessor with stoned-groove and all the excellent overt heaviness you’ve come to expect by now. 100% Full Fat Noise – do indulge, its good for your health.

The Palatines – ‘Vacation To Helheim’