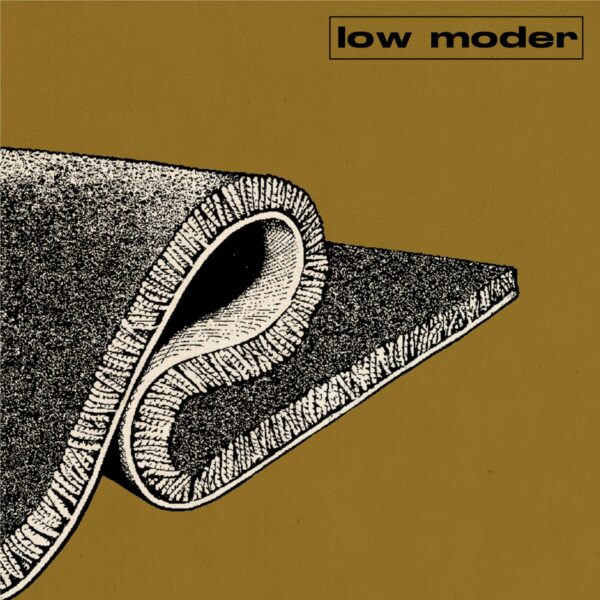 The Self-Titled from Low Moder entered at the very beginning of this year of “oh what now.1”. The four-piece who by their own self-description are ‘An alleged band from Lincoln‘ occupy a sonic plane of existence where inhabitants are required to dance in a seemingly disjointed, chaotic and disorganised manner. This is at least what it appears to be in the very dark corner of the room at which Punk has deviated and evolved within. The walls continue to expand and yet Low Moder persist to gyrate away, wailing in a melodic yet discordant, jarring and eerie manner. I am of course referring to both Noise Rock and the earlier variants of Post-Hardcore. That or “that” local pub we all avoid. Well, did. Ugh, what a time.

Moving on, swiftly, Low Moder open their eponymous effort with ‘Crackle’. It is obvious from the instantaneous trudge onward to the juxtaposition of the playful first verse that this isn’t going to be a straight running, rounded release. The band’s wild, wandering and warped guitar is spasmodic and brash and is admittedly rounded, but only temporarily prior to being let loose. Which of course it is. The band’s first verse rocks back and forth in a vain attempt at controlling itself and its myriad of intricately well-composed layers. ‘Crackle’ then explodes into a vibrant, Noise-straddling Post-Hardcore energy ala the more charged end of Fugazi or a marginally down-tempo Drives Like Jehu. You decide.

‘Herding Cats’ conjures some interesting imagery via its title alone. This continues into its lyricism sponsored by a forward-facing heavily pounded beat and overtly dominant, gargantuan plodding bass. Track two epitomises Post-Hardcore precision initially. That said, it also shows how it can be twisted into a “why the fuck not” disjointed, jarring display. I hear that’s called Noise Rock. Two is unsettling to say the least but not enough to skip or nullify its sonics. Low Moder exude nothing but comfortable chaotic confidence and the destructive combustion at the track’s end is worth the wait.

The repetition of Noise Rock, Post-Hardcore and much of the Punk and Hardcore preceding it is a minefield. You can’t escape it if you choose to hurtle down the aforementioned roads. In fact, you’re almost certainly damned if you can’t imbue it with enough hooks or beckoning intrigue. I am pleased to say that Low Moder are more than aware. ‘3 Times Hall Of Famer’ if rife with this well-orchestrated repetition across the instrumental board. Track matches the frenetic nature of Low Moder up until this point but only operated within a strict set of parameters that fool you into believing they are shifting. Vocally, the band back a sombre, disinterested and beaten down tone from the lead with a comparative gusto as they struggle to find their escapism.

‘Peace Prize’ showcases either end of the four-pieces intensity sponsored by a pervading foreboding air. At this stage, Low Moder are more than aware that they can do what they wish when they wish. ‘Peace Prize’ is the staple that you’d show a prospective listener and also displays a shining example of the powerhouse of a drummer the band possess. ‘Italy’s Closed’ is about exactly what you think it is and makes for a wonderful rendition of sardonic Fugazi-brand Post-Hardcore. It is also the shortest on the debut, clocking in at 1:50.

The band close with the 6:58 tirade of ‘Matching Outfits’. Low Moder cleverly ply their genre hybrids penchant for repetition into and through their deconstruction of the passing of time on track six. Low Moder opt for a slow, lumbering quiet-loud-quiet-loud formula in a track that just is. There is no real criticism for Low Moder and their Self-Titled. The band fall in and out of crashing abrasion, again, frenetic energy and bouts of pseudo-respite at will.

There are Noise Rock bands that I’m sure are heavier. Bands that are increasingly spasmodic, louder and generally more unrestrained but that’s not the Low Moder modus operandi. This is a band that teeters over the edge of complete uncontrolled combustion and skillfully pulls-back in complete and seamless control of their indestructible, perpetual energy.

Those why my thoughts on Low Moder and their Self-Titled. But what do I know, eh? Find them below.

On A Hiding To Nothing and ‘We’ll Probably Be Fine’