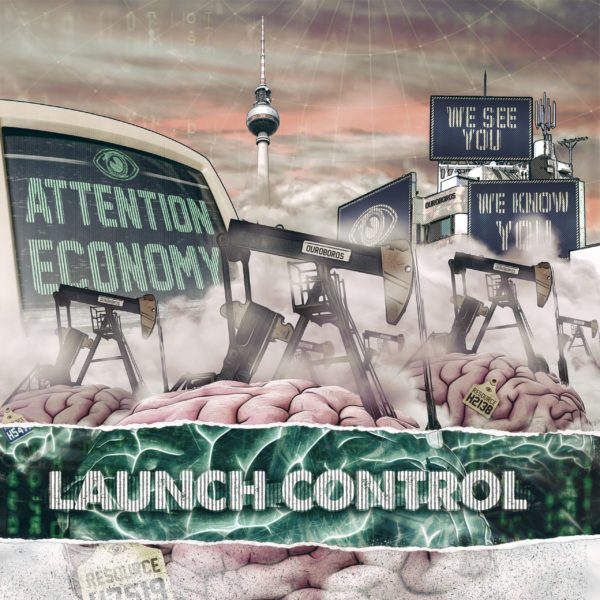 It’s been three long years of political strife since their last commentary and now Launch Control return with the Attention Economy. The Reading band’s evocative, poignant and societally resultant emotional-drudgery-drenched socio-political musings are now in their fourth phase. Although today concerns phase four, I shall but briefly implore you to the highest degree, to indulge in their past Punk-Rock extrospection of how we got to 2020 – Here. However, with one more momentary digression, the band are also known to release their take on the annual Christmas song from time to time. Perhaps give those a try, but not now, because its SEPTEMBER at the time I’m writing this.

And so, Launch Control and the Attention Economy. The three-piece’s number four is one ‘[…] born in the frustrations of the post-truth age of Cambridge Analytica, targeted ads and state-sponsored populism‘. I would extend that with one but important edit and add the “Right Wing” element of said populism. Which, actually leads excellently to the opener ‘Zombigots’. Attention Economy attempts to shed light on the lights in which our attention is being led by, down mysterious profitable alleys of riches we won’t see. This, in the case of ‘Zombigots’ is the ideology of hate we are convinced is correct, relevant, and a normality worth chasing. – ‘But now the anger that’s been boiling, has been refined as poison in, it’s seeped into our bloodstream […]’. Launch Control attack the inherent obsequious nature of the UK populace and how many must ‘shackle (their) intelligence’ and ‘run for (their) way of life’ in fear of ignorance.

‘Zombigots’ begins over a sombre acoustic sadness but soon breaks past it. Launch Control move into stripped, classically punching Punk-Rock while melodic vocals hammer the point home with a sardonic, sad realisation. ‘Attention Economy’ follows on organically. Launch Control are not a Skate Punk band but throughout their career infuse such where necessary. The aggression, however, is ubiquitous. Launch Control’s accompanying instrumentation to this cyber-to-real-life nightmare is fitting to the algorithmic existentialism so terrifyingly depicted. ‘Attention Economy’ is haunting. From its jagged, floor-dragging angst-ridden rhythms to its sombre lines and added Post-Punk effects, its message is only further substantiated.

If you have ever been told to, “stop making it political” or to perhaps more relevantly, “keep politics out of Punk”. The riff-heavy, warped and ’90s Punk injected ‘Cult Of Ignorance’ will be your smashey-smashey soundtrack. At 1:28, Launch Control relent their heaviest track yet in favour of further a haunting reality. Between 1:28 and 1:57, the band’s Punk-Rock, now sentient with inherent rage, cuts through another gloom-trodden Post-Punk-esque wash of synths and dystopian electronic disturbance as the true death of intellectualism is made apparent. There is a reason for the band’s three-year absence. Through blasts of mild-Skate Punk and it’s heavy-set, down-right pissed off “fuck-it” riff-work and emotionally unstable, gloom-trodden refrains, LC are on top form in ‘Cult Of Ignorance’.

Launch Control may not carry the speed and interchangeable aggression ala the likes of Good Riddance, Bad Religion or Strike Anywhere. Their marginally Alternative Rock-paced Punk may not rise to the highest of BPM, but its there in part. Furthering this, what the band do achieve is the lyrical poignancy, intelligence and “shit-cutting” literary abrasion of the above and more. The intelligence of modern Punk reaches its LC-brand apex on Attention Economy. At the stage of the penultimate track, the band tease up-tempo blasts, which for some, could be argued irritatingly teasing rather than tantalising. However, in a notable move, ‘Paper Tigers’ unleashed a welcome blast of late-’90s Skate Punk and that’s all I have to say about that. That is, other than that without the stylistic of ‘Paper Tigers’, Attention Economy would lose some brownie-points.

Lyrically, the band’s fourth EP is not an easy listen. Attention Economy unequivocally argues its five-fold point and is beyond hyperaware. It’s a release written by the people who can see something is wrong. After the previous four razor-sharp and gargantuanly uncomfortable, emphatically presented truths, track five is the icing on this decomposing cake. In ‘Marketing For Martyrs’, organised Religion and the coercion of a broken mind into submission and indoctrination is harrowingly depicted to a point of rumination-inducing facially-expressive stagnation. Everything is political, even when its in the interest of Religion. – ‘They can’t sell you a life, so they’ll sell you a death, they’ll promise you everything you desire’.

Our attentions are being coveted at all conceivable angles, be yourself and question everything.

Launch Control and The Attention Economy are separately and in unison, absolutely required within the realm of political Punk. This is a band that cares. You can find everything you need below as well as the Spotify pre-save for Attention Economy.