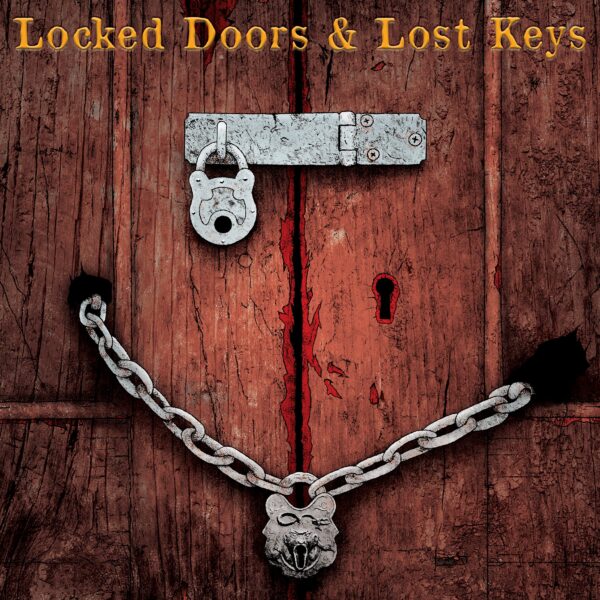 Jason Stirling & The Blue Moon Band and Locked Doors & Lost Keys appeared this past February 2021. Already in this year of “seriously, what now” also known as 2020.1 and 2021 “officially”, it’s been difficult to keep up with the inordinate amount of DIY Punk and Alternative music releases. So, with that in mind, expediently put, Jason Stirling of Matilda’s Scoundrels, Ben Hannah of The Organworks Recordings and Nosebleed as well as Dicky also from the latter, recorded an EP.

Instantaneously, the genealogy of Matilda’s Scoundrels is felt as much as it isn’t. Matilda’s Scoundrels are as likely to overtly charge off into gritty, hard-driven Punk with a prevailing sense of aggravated catharsis as they are near-fully Folk-led instrumentation and melodious anthemic sing-a-longs. That or a wholehearted, rambunctious hybrid of the two. What Jason Stirling is doing with The Blue Moon Band, although inextricably linked to such, feels resoundingly more rounded. ‘Railway Man’ centres around a light, front-facing display playfully straddling reserved yet rumbling Punk. Track one is a tale of struggle and woe in a bygone age. However, that’s not to say its themes won’t solicit some resonance. ‘Railway Man’ clever positions itself slap-bang in the middle of melodic-leaning Punk-Rock and an almost effortless Folk that prepares you for what’s next.

The eponymous track two employs some of Stirling’s Country-isms not too far removed from an air of Social Distortion‘s own Cowpunk tones and yet still resoundingly embodies its UK-centric self. In many ways, track two furthers the anthemic ties to more recognisable melodic Punk. ‘Locked Doors & Lost Keys’ meanders through its own hooks in such a seamless fashion that although it does starkly contrast its predecessor, it glides in and out of its own path in some sort of out of body experience. ‘Locked Doors & Lost Keys’ deviations and exuberant bounce fit like a glove into the EP’s flow before the rest of the EP has even happened. I know what I mean; I think.

‘Let Them Tyrants Be’ maintains the Cowpunk-centricity. Again, to reflect on the project’s lineage, the overtly combustive aggro of Matilda’s Scoundrels is felt though only enough. Jason Stirling & The Blue Moon Band repurpose into a broodingly low-ridden aggro that powers the illustrative sorry telling Stirling is so adept at. Track three maintains, overhauls and repeats the deep, dare-I-say bluesy Punk while a harsh yet distinctly light layer of Folk-strings eases it all in. ‘I Fall’ traverses a lawless land in yet another Country-led rumble. Though there is far more of this school of Folk music present on Locked Doors & Lost Keys than I expected, with such intricate yet raw layering and the pounding drive of the rhythm section, I’m certainly not averse to it.

‘Railway Man’ in hindsight, although an excellent opener, is quite misleading. Though the track laid the melodic approach the middle-run of the EP would take, it very much sits on the fringe of the whole. That said, considering the quality of what ensued, it’s hardly worth stewing over. Jason Stirling & The Blue Moon Band ebb to a close with the fellow contrasting ‘Unprecedented’.

Although the very word has become one of the most annoying in the English language, it is fitting for the narrative of track five. Stirling retreats behind dulcet tones, reflective of the UK of the last year. Although the song clearly pertains to the first national UK lockdown, its poignancy is just as relevant now. ‘Unprecedented’ is a song about a situation that is thus. However, it also highlights directly, cleverly and in an overarching manner, more than one aspect of the pandemic period and some of its occurrences and truths. Everyone has a right to life.

Jason Stirling & The Blue Moon Band and Locked Doors & Lost Keys may not be what you expected but it is defiantly it’s own. Find it below.