It is safe to remark that Arms & Hearts and The Distance Between as a focussed title has been a long time coming. The Manchester-based artist and project, although often strumming-solo, is often joined by others. Joined by others in a room moving through gruff yet approachable mostly-acoustic Punk music with beckoning onset Folk and “mainstream” applicability. Arms & Hearts writes songs both intro and extrospective via the manner in which Punk has infused itself into other less “Rock”-based mediums. That said, prior to a return to the above Arms & Hearts did deviate with the double single ‘Polarity’ // ‘Time Flies When It’s Meaningless’, of which a full review can be found – Here.

The above saw an experimentation but now and for the most part, Steve Millar has returned to his roots. ‘Epitaphs’ begins via a gentle acoustic ebb and then follows with electrified infusions of the same sombre origin. The opener is one of onset existential woe but is also deeply personal and reflective. Is it better to burn out than to fade? Are we going anywhere? The hours slaved away, are they worth anything? ‘Epitaphs’ is very much a song sadly intrinsic to the modern age and the thoughts of many. 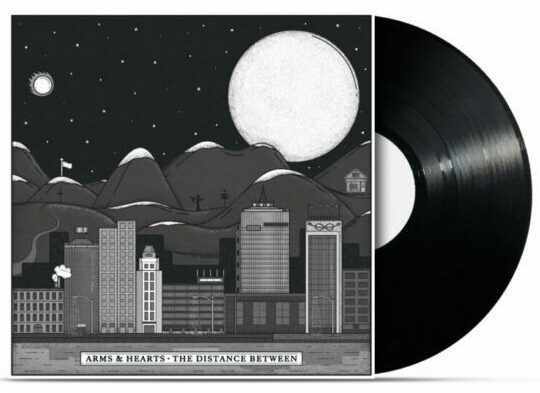 ‘Kerouac On Minimum Wage’ is full of hopeful and youthfully exuberant machinations. Vibrantly illustrative dreams of living fast, dying young and going out with a bang. However, only as far as limited gold will take you. Although track two is upbeat and defiant in tone, it’s yet another sad and true acoustic Punk song that is cathartic but not a cure-all. ‘Forever The Pessimist’ continues this contemporary pessimistic realism. The Distance Between is by no means an easy listen. For Arms & Hearts sings of the pseudo-availability of our attention and distraction economy. ‘Forever The Pessimist’ sets itself to the hoarse strings and vocals that he is known for alongside the equally abrasive statements. Musically, this upbeat but poignant grit is juxtaposed and yet simultaneously eased-in to your psyche with a welcome inclusion of a further plugged-in approach.

‘Static’ alternates again. The latest in the running order is muted across the board and downtrodden until a sombre refrain allows Millar to build his confidence. Once it’s been constructed, the approach taken with his previous release infuses itself in the manner I had hoped it would. That said, ‘Static’ is still two-thirds the Arms & Hearts you know. The lost generation indeed.

‘Community’ features one Jared Hart and below, you will see why it was chosen as a leading single. – ‘Do you still believe, in Community? Believe in something bigger?’

The Distance Between is mired amongst some fights and on the periphery of others. However, ‘Out For Blood’ is the “fuck it” jump into the greater fray. Although this latest from Arms & Hearts is increasingly more melodic, there is still some of the raw-raucousness of his previous work. ‘Out For Blood’ very much bridges this gap with its defiant semi-acoustic Folk-Punk. I had initially expected the track to lean more overtly towards its Punk-isms but admittedly, its lyrics compensate more than enough. This a song that’s had enough of the inexorable build-up towards its own combustion.

One thing this record does indeed do well is to deviate enough between bouts. Which itself always a precarious line to straddle amongst acoustic and semi-acoustic releases. In the case of Arms & Hearts’ work in its entirety and within this particular effort, the quality is resoundingly robust. Questioning this is indeed is a non-issue. However, the flow of the record would be inhibited in any other format. Millar’s efforts are not overly bound to acoustic strings and neither are they too infused with anything else. Directly put, throughout The Distance Between, the instrumental variety is no more or less than it should be.

‘Worry In The Walls’ falls back again on simplicity. Gentle, reserved Folk channels the inherent indentured worry and existentialist gripes that have inspired the release. Millar’s hoarse vocals again take the place of aggy-Punk-fuelled instrumentation as the worry gets too much. ‘Worry In The Walls’ in truth, despite its reserved nature, makes for one of the best on the album, in no small part bolstered by its sad flirtation with both brass and the sad-smile of a harmonica.

The eponymous ‘The Distance Between’ welcomes the format of the previous release and owns its position as the title-track. For all his grounded work in and around acoustic realms, Arms & Hearts is more than adept at full-band-esque efforts. To be succinct, by the time of this penultimate number, Arms & Hearts has truly had enough. At this stage, its a matter of movement and necessity. ‘The Distance Between’ builds and builds but the climactic drop doesn’t arrive. Instead, you are confronted with a period of reflection and it’s a fifty-fifty split of what is preferable.

‘Fortitude’ returns to close a pure-to-form emotional release. The track was always a go-to for the Folk-Punk wing of Arms & Hearts repertoire and yet still managed to pair with his more dulcet work. However, in version two, ‘Fortitude’ is comparatively rawer. Millar’s vocals are more reflective of the defiant lyrics. The aforementioned Folk-isms have been altered and sharpened but ultimately retracted into more of a conditioning. ‘Fortitude’ has now become a considerably different song. But, is this an improvement? Yes, but not in the purest sense of the word. ‘Fortitude’ has been rehashed to be reflective of where Arms & Hearts is now. The closing number has been intentionally left to state that it’s indeed ok to feel dejected and that home is very much where you feel comfortable.

Arms & Hearts and The Distance Between is soon to be released and can be pre-ordered – Here and Here.