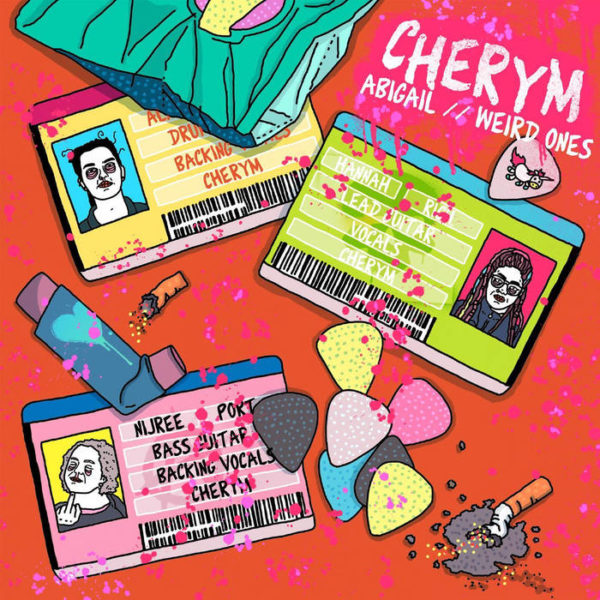 Another day and another piece trying to battle the expanse that is the internet trying to get noticed. And so, Introducing Cherym it is. The Derry three-piece have been steadily releasing short-sharp self-dubbed Pop-Rock tracks concocted by a clear appreciation raucous Garage Rock n’ Roll as much as bitter-sweet Pop-Punk exuberance.

With some bands, it’s honestly easier to ignore their timeline and simply settle for an external recommendation. We’ve all done it but here I personally recommend trundling along to the point emergence. Cherym’s evolution is a wild ride of what can either be described as Pop-music played on the fringe of writhing underground Rock or the very latter on its way to the former.

Mouthbreatherz is a three-track EP straddling playful Pop-Punk in the manner of which arguably it should be played in ‘Take It Back’. In ‘Telepathic Kelly’, Cherym move away from the thin layer of gloss and accentuate the latter half of the former double-barrel before segueing perfectly into riff-heavy, latter-timeline Alt. Rock dirge. A prevailing Garage Rock tone permeates this stage of Cherym as they tell their life stories in a Pop-Punk sound far from cliche. ‘Pretty Boys’ is nothing but hook-laden and ear-wormingly infectious. And yes, I am perfectly aware that isn’t a word.

Despite their again, self-dubbed moniker, Cherym are as raw as they are adept at melody. ‘Super Queens’ is actually the first I heard of the band and to go back on my own advise momentarily, would be an excellent case study-starting point for a journey with the trio. The band’s raucously rambunctious youthful exuberance is able to seamlessly transcend genres. The band’s harder, Punk-aware, fuzzed Garage Rock approach is one intrinsically suiting, but alas, so is the arguably more mainstream Rock sound of ‘Abigail’ which followed later in 2019. ‘Abigail’ boasts a gentle ebb in the verse led by a determined line effortlessly embedding the track in your ear-canal so deep that but the time the chorus enters the fray, you belong to the band wholly.

‘Abigail’ wouldn’t be seen for the last time, however. Earlier this very month, the band would push her to the forefront again, this time in the company of ‘Weird Ones’. Cherym make a further push towards the mainstream border but in the most DIY way possible. An oxymoron-type, paradoxical sound-tuation perhaps? Not at all! And yes, again, I know that isn’t a certified collection of characters entrenched as bonafide word, but who really cares?

Digressional waffle aside, ‘Weird Ones’ is an unequivocal high-point in the band’s career. Despite a Pop-Rock sound inundated with melody and stellar backing vocals, the ubiquitous heaviness is very much that. On ‘Weird Ones’ Cherym are unambiguously still the raw Riot Grrrl DIY band they were on Mouthbreatherz, they’ve just repurposed their emotive catharsis further in music they want to hear, to illustrate the tales they wish to tell.

Cherym’s Punk attitude, Pop-Punk penchants and Garage-fuzz set to an Alt. Rock structure is something that is absolutely not going to stop yielding such addictive tones ANY time soon. That was, Introducing: Cherym. Please don’t swallow it, hungry Interweb over boss!

The band are also featured in the EN ‘PunkDayEvery’ playlist – Here.