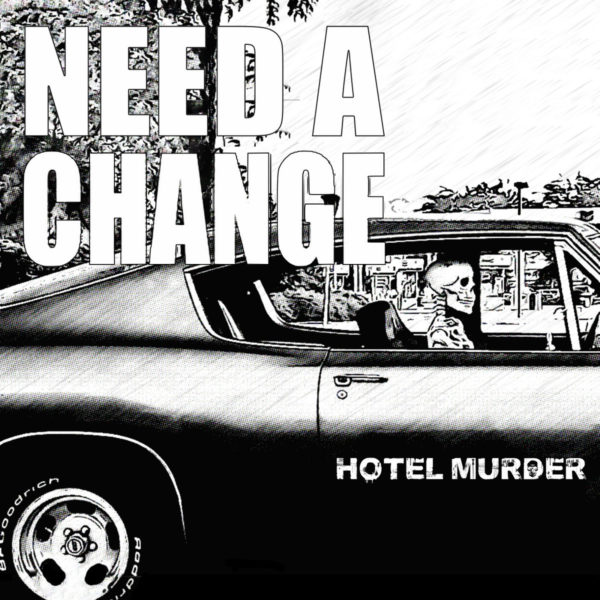 Horror-themed Punk-Rock that DOESN’T have anything to do with the Misfits? Enter Hotel Murder and the ‘Need A Change’ single. The gothy make-up and general Misfits aesthetic works for some, namely its original purveyors but has often fallen flat during external emulation. Thankfully, despite their penchant for the blood-dripped knives and overt gore, the Toronto-based Hotel Murder are nothing of the sort.

Formed in 2018, the band have an EP that was recently remastered and two singles to date, one of which we are here for. All will be left at the end but for now, yes, change, we need one. I digress, I’ll actually discuss the track now.

The band’s rough-cut yet melodic Punk and Hardcore sound flirts with Thrash as much as the prior two but overdoes none. Cleaner vocals battle harsher-Hardcore tones with an occasional middle ground. Hotel Murder have a foundation from which they are able to explore the perimeter around it. Enter, ‘Need A Change’, where the band very much embody the aforementioned middle ground.

‘Need A Change’ is the soundtrack to a drug and booze-fuelled bender itself trying to prevent another killing-spree. The soon-to-be-killer-again is pacing around corners at the speed of a classic Hardcore-meets-Skate Punk beat. Take your ears back to very initial Pennywise recordings of that era of west coast Punk and ply that with the early Hardcore vocals of Agnostic Front and ‘Need A Change’ fairs very well, at least sonically that is…

Why just the music? Well, before the killer resumes and the urge becomes all too powerful, the ticking-time-bomb in question is ultimately murdered by his own drug-dealer. Harsh.

Back to the sonics. The band’s morbidly yet playfully-gruesome sound gains even more functional-weight with ‘Need A Change’ and does so even more with their back-catalogue considered. Hotel Murder sits amidst that fresh-blood sweet-spot between classic Hardcore and Skate Punk and you can find the majority of their craft via bandcamp.

The band’s previous and eponymous single ‘Hotel Murder’ can be found in the EN Skate Punk and Melodic Hardcore playlist on Spotify – Here.