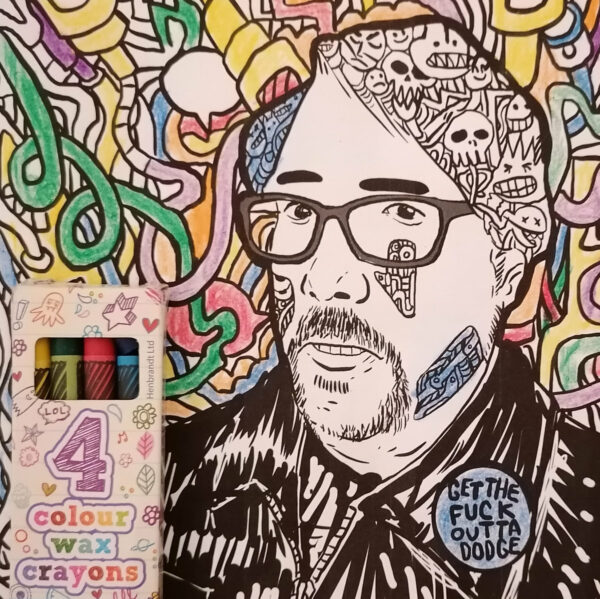 Do I know why Garage Punk is so prevalent this year and overall more recently? No, but Get The Fuck Outta Dodge and Buzzkill have entered 2020 as a further distraction while I attempt to ascertain this abundance of grit. In reality, I absolutely do not have the time to look into this, so a full review of the Sheffield band’s most recent release of their years many will suffice. Well, hopefully.

It is important to state that, Buzzkill was recorded and mixed in six hours. This earnest veracity is felt instantaneously through the eponymous track one. ‘Buzzkill’ is a rant set to a reverberating aesthetically classic early Hardcore Punk tone. The band push on through their gripes at everything killing their respective buzz atop further vintage, raw crashing drums and maniacal vocal interplay for a grand yet limited 0:53. ‘Buzzkill’ seamlessly translates its disdain onto the fabled ‘Karen’. It may seem pointless to state that the band’s mixing on their lone bass is on point. You could indeed pass off the compliment but it would itself be pointless. The band’s two-human stature is irrelevant here as a good mix is a good mix. Get The Fuck Outta Dodge indeed got the fuck out sounding their best, which is surprising with how indomitable this particular Karen has become.

‘The Norm’ enters on a floor-board shattering tone over ironically playful and cycling drumming. Vocally the band’s Punk-flare is relaxed momentarily and then juxtaposed by their norm at the close of each short verse. ‘Flag’ befittingly nurses the legacy of Black Flag, or is it FLAG? Something, something lawsuit. Humourous digression aside, the legacy of the archetypical Hardcore trailblazers is more than felt here. I would also go as far as to recommend south-west UK underground staples Ghost Of The Avalanche, Brasher and Meadow Burials. Which is cheeky, as they share and have shared members but that’s just Punk-Rock community, right?

‘I said GOD DAMN’ reverberates continuously and segues quickly into ‘Go Vandals GO! as the band’s maniacal vocal interplay conjures images of the live shows we all miss. Tracks five and six maintain the stamped edge of ‘Buzzkill’ as they dance precariously over the precipice of stylistic limitation. This “risk” is very much expected territory. The band themselves will know this as much as any reviewer or listener and from my personal perspective, it fails to impact the band more than the trivial norm. To be succinct, you know what you’re in for with bands such as Get The Fuck Outta Dodge. However, I’m not here to make your mind up for you, only to offer mine and assist in your final decision. Or so I’m told.

However, via their track arrangement, the band discard bouncing back and instead opt to charge forth. ‘Snitches and Stitches’ is enveloped in thick viscous distortions that would have made Rollins-era Black Flag look on in envy. Seven doubles down on the Hardcore its verses but cannot seemingly help itself leave behind the bands Rock n’ Roll twang.

‘Some Basses Are Better Than Others’ crashes through 0:46 of axe envy. The latter half of Buzzkill takes a darker stylistic turn, combatting the risk of complacency. ‘No One Likes A Show Off’ builds on the unrestrained humour-rage of track seven and furthers this darker turn. GTFOD are sarcastic, sardonic and mocking by nature but it would be foolish to mistake this bravado as assuming its hegemony. ‘No One Likes A Show Off’ epitomises the best of this gloom-ridden turn. However, ‘Still No News From Above’ may seem like the existential cry of this very pandemic but at least sonically, it finds the sweet spot between the band’s most playful and heaviest. Track ten also marks a notable anthemic highpoint between 1:34 and 1:52 before a return to the factually devoid wails.

Have you ever spent some time in Punk-Rock-centric groups on Facebook? I have, and so have the two-piece. Have you encountered those who didn’t quite ever leave their “I’m so Punk” phase? Yes? Well of course you have! Buzzkill is an album of its namesake and the closing ‘Trying Not To Be Punk Is The Most Punk Thing I’ve Ever Done’ is a direct response to this scene-borne Buzzkillington.

Get The Fuck Outta Dodge and Buzzkill are high octane, despite the stripped-back limiting format. It’s not a record of unrivalled diversity, as that’s not really possible here and doesn’t need to be. Buzzkill simply is, with this “is” being exactly what you’d expect from an underground two-piece Punk band. A high-quality, raucous ride of confident and intrinsic energy, well confined and distributed within a small yet refined maniacal and spasmodic powerhouse.