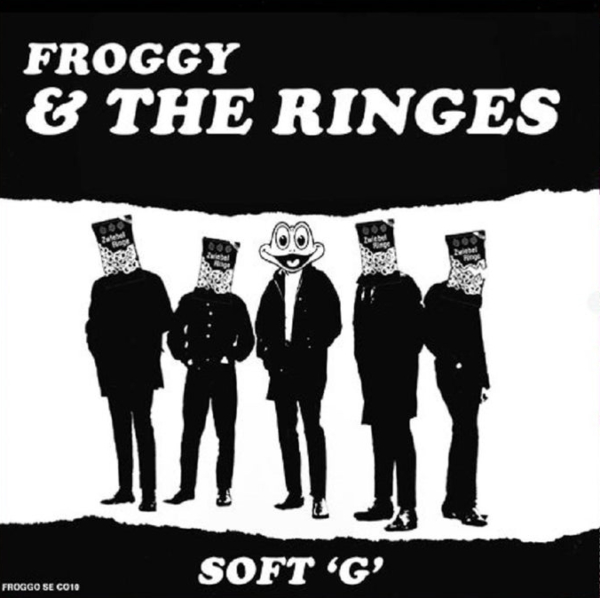 Froggy & The Ringes and Soft G. Well, where to start. I should think a blunt introduction is best. The five-piece are yet another addition to the vast and growing roster and amalgamation of weird, wonderful and heavy that is Kibou Records. I would also like to add that the rather underused but appropriate term “dirge” is also rather fitting. Kibou are a household name in the underground Punk scene, dealing mostly in fast, loud and heavy-set Hardcore Punk and often derivatives of such best described as abstract. This is perhaps the best manner unto which to avoid overt pond-ification regarding Froggy & The Ringes, so we will leave it there.

But what of their forthcoming discordant mass of sentient Rock n’ Roll Algae-core? Well, along with some other dealers of the dark realm of underground Punk 7″s, Kibou allowed me said damp-mass early. Shall we?

‘Froggy & The Ringes and (Soft G) Theme’ opens and harkens back to a time where brash-Punk-Rock was being played by those who couldn’t play. Supposedly one-chord is indeed best and through whichever Ringe is drumming, crashing away behind the kit, this one chord adoration presses on. In all marginal seriousness, ‘Froggy & The Ringes and (Soft G) Theme’ actually toasts the early Hardcore of the late ’70s and early ’80s energetically and in a more than entertaining manner. I should think one day we will be able to sing it back at them. One day. Furthermore and further truthfully, track one is entirely what it is supposed to be, shamelessly drenched in its own self-disregard and care-free Punk-Rock.

‘Auction This’ furthers this ode to classic Hardcore Punk and crashes through its duration intrinsically unto itself. True to form with any of those linked to the various groups of musicians that occupy most of the Kibou projects, no track can pass without qualifying as abstract. Froggy & The Ringes in this case, bother not with the brass of PI$$ER but employ looming keys soundtracking the thrill of the acquisition being explored. Not that I would suggest this band to be ANYONE you know at all. Neither Ringe nor Frog are quite domesticated, just yet.

‘Auction This’ in this age of rightly serious Punk and Hardcore, maintains the foundational aggression. F&TRs capture the raw nature of the forerunning styles that inspired so much. This is something that cannot be negated. However, this where the band leave the seriously serious cathartic default behind. For in these uncertain times, a little light humour is preferred. That and knowing where your trousers are sourced from. Obviously.

Ah yes, Side B! Given the double-quirked tone of this EP, the expected deviation has a right moan in ‘Don’t Listen’. Track three is mired in frustration despite it’s slower yet playful Rock n’ Roll-rumble. ‘Don’t Listen’ faces a conundrum that plagues the modern societal norm and despite its humourous jibes at existence, the real point is received. Froggy & The Ringes may well be on the resounding side of tomfoolery, but let that not dissuade you from the real mess of living in your own head. – ‘Living in your head and you’ve got no choice’. Despite its stylistic foray into a cheery yet sardonic territory, ‘Don’t Listen’ is the magnum opus of Soft G. 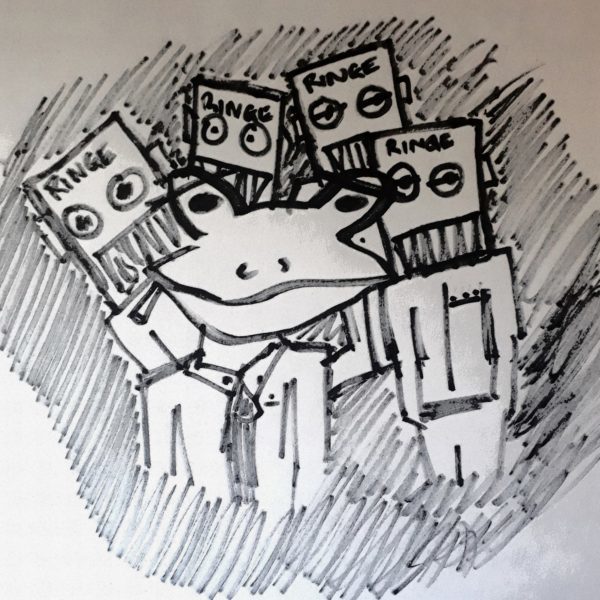 Unfortunately Froggy & The Ringes discover that not even the Beer listens, which, understandably is likely quite distressing for the brew-centric among us. However, this is not something the Hardcore n’ Rollers permit as an inhibition. For Froggy & The Ringes are in fact cheap beer incarnate! The final and closing ‘(We Are) Cheap Beer’  forgoes any semblance of guitar-melody for a key-led contrast. Despite the raucous-frog-core on offer, Froggy and his spawn still achieve more than a certifiably robust rendition of Hardcore Punk. However, despite this, and how cheap their genealogy of water, hops, barley and malt is, it is very important to note that they, in fact, do not reside in Belgium. Something, something sugar tax.

Now, has this been a review or rather a barely coherent reaction to the waxed-pond-life habit that is Soft G? To be honest, I’m not even certain anymore. That said what I will say is that I’ve had fun, Froggy & The Ringes have had fun and that Soft G might just be the rambunctious rock and or rolling release you need to break the ever-tightening gloom-ridden grip of contemporary existence. That or the determined suffocating nature of that absolute pond-scum that is Algae. That or proto-fascism. Fuck knows! I’m going to shut up now.

Froggy & The Ringes and Soft G is available to pre-order below via Kibou Records. Toxic Wotsit and No Front Teeth Records will also be assisting with Soft G in the UK. Amok Records will be handling the release in Germany with Cimex Records doing so in Sweden.