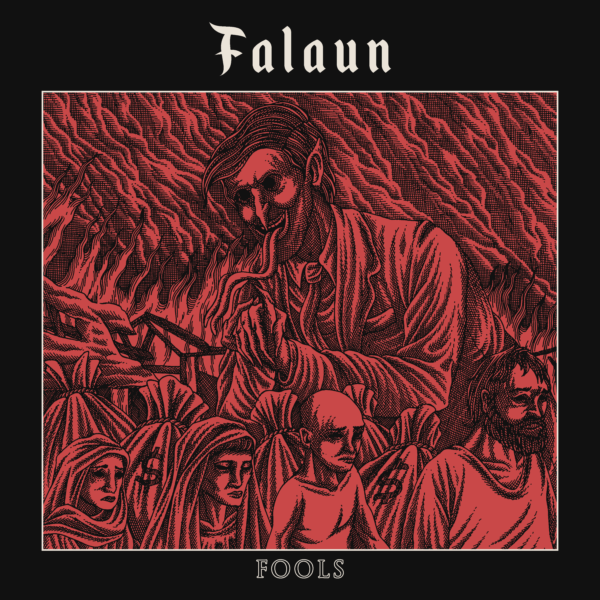 Despite having only existed for around a year up until this point, Falaun and their debut Fools are making their respective marks on the UK Punk scene. I may have just essentially personified Fools as an entity in itself and as much as that may seem like a literary mishap, I can assure you that it isn’t. Both band and album hail from Liverpool.

Fools is the debut full-length and third release in total including the band’s demo and live album from 2019. Considering this, its seventeen-songs in thirty-one minutes is an impressive feat for such a small space of time. ‘Fools’ is a melodic foreboding lull. The eponymous number opens the debut with such a tone and successfully fools you into thinking that is that. Alas, ‘Fools’ builds and at the 0:54 mark, it’s cathartic subtly melodic Hardcore Punk reveals itself. ‘Fools’ is a grim reminder of working to the grave and how gold coins entrench us to their will.

‘Turning Read’ poses to a plodding beat and a gyration inducing groove before the band’s grit is doubled-down over a tempo only relenting for the real point to paint the town red. Fans of From Ashes Rise and their Crust Punk ‘core will find something here.

‘Sick’ echoes the early days of the ‘core and sees the band’s resident Kate lead the welcome vocal-interplay. ‘Sick’ plays more with the carefully limited melody as Fools organically and increasingly goes beyond simple fast Hardcore. ‘Penance’ progresses this welcome change in dynamic in longest on the debut, as the track vehemently addresses an issue that you’d think really should have dissipated by now.

Five tracks in and Fools has already dispelled the assumed structure. Albums of this duration are often synonymous with fast repetition but alas, Fools is not one of those fools. ‘These Walls Must Fall’ is one of the top-tier faster tracks of a record that intelligently structures its wanton destruction. ‘Replaceable’ is another grim reality check and ‘Night Witches’ a crunching adrenalised blast of Fastcore dirge. ‘Set In Stone’ brilliantly breaks-rank again, breaking tempo for the second stage of the intro. Of course, the band fail to stay away from their inherent tempo entirely but that doesn’t the negate how crucial it is to the album’s flow when they do.

As a minor-digression, if this marginally-melodic yet abrasive Hardcore sound appeals to you, after you’re finished here, indulge in both Lay It On The Line and Grand Collapse. You won’t regret it.

Onward then. Now that Fools is open and able to eviscerate public ears, tracks such as ‘Poison The Well’ and ‘Not Alone’ are arguably go-to’s regarding the best way to represent Falaun. Both pertain to the vehemence of both the band’s leftist politics and their varied yet cohesive Hardcore Punk-Rock sound. Falaun are only melodic where necessary and unafraid of nakedly-displaying their existential disdain. Fools is exhausting and difficult to listen to akin to the same way in which it is to attend lengthy all-dayers and festivals. You feel your legs and ears begging for a break and yet you still soldier on, flinging yourself around in whatever way you choose, writhing in pure responsive energy. See ‘Marked Safe From’ and the aptly titled ‘Pit Girls’.

‘Pit Girls’ is a highlight musically but also fundamentally so lyrically. Womxn to the front, the pit isn’t just for your macho displays anymore. After another choice-cut sample, ‘Yours And Mine (goose)’ is over before you know it. ‘Gulliotines’ would be another of Falaun’s repertoire that seamlessly glides into choice-cut status. The band are adept at pertaining to the harder end of the ‘core yet more traditional, roots-structured Hardcore fits so-very intrinsically into their craft.

The final three of the high-octane debut from Falaun fail, but only in letting-up. The fact that Fools remains tenacious and relentless and yet still avoids catapulting into “samey” territory is its absolute selling point outside of all the other reasons you should buy and blast this record.

Falaun and their debut Fools is out now and is the first release and first of many from one Dead Invoices Records. Find both below! I need to lie down for a while, for Fools is both alive, excellent and exhausting company.