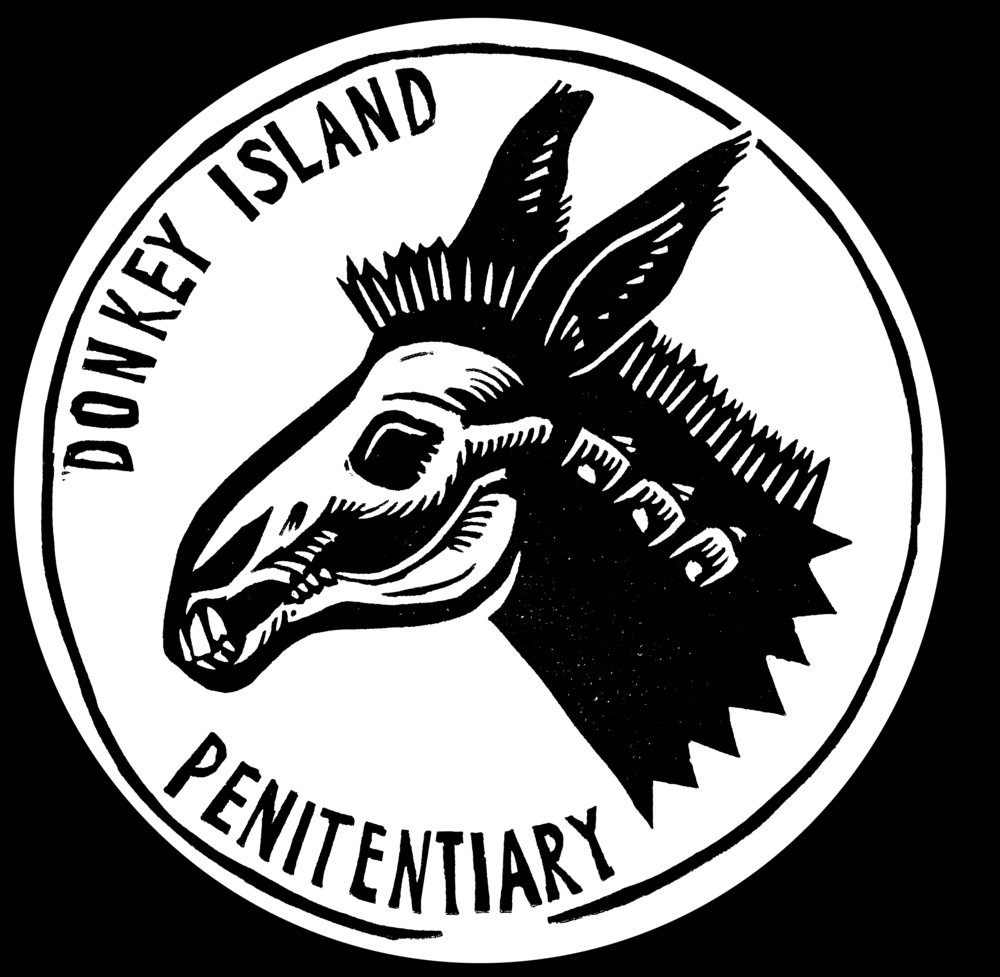 Donkey Island Penitentiary and their self-titled. Despite it being the Los Angeles band’s third release they have opted to wait to until now play their eponymous-title card. Be honest now, with a name like that, you’d very much play it safe until you knew you could make the most impact.

Speaking of impact, the band’s own impactful collation of noise sits in the midst of a brooding, groove-laden and cathartic mix. One denoting to Blues, Punk, Rock n’ Roll and repeat. 2016 and 2017 saw two EPs, entitled Exile On 4th Street and Escape From… respectively. It was there that through a little experimentation and some line-up rotations the band would ultimately settle.

‘Who’s The Monster’ enters on Garage Punk riffs following a determined Harmonica onto deep, brooding slowed-Punk bass. Vocally, it opts for a Blues meets Classic Rock approach as Donkey Island Penitentiary shuffle around their influences. The band’s Punk bite is subtly placed. In fact, as track one rumbles on it only intensifies towards ‘Run Away’.

‘Run Away’ merges driven and anthemic melodic Punk with the band’s Blues foundation and is absolutely their best. ‘Shoot You Down’ maintains the melodic nature of the predecessor but via ballsy and bluesy Rock n’ Roll. The track is a rehash and refinement of an earlier version seen on Escape From… and trumps its predecessor seamlessly.

‘Man In The Shadows’, ‘Tarantula’ and ‘Going Down’ are the slow enveloping mid-album ebbs. Each track tackles a different approach regarding the slow Blues-rumble DIP have settled into. The former is a disinterested, depressed trudge that segues into moments of rage. Meanwhile, ‘Tarantula’ has an almost Reggae beat while it pines after something that in hindsight might well be its end.

‘Going Down’ may juxtapose what makes the band so appealing regarding their more charged output but it still holds its own. Donkey Island Penitentiary are far less Punk-orientated on this release and despite the overt risk, it works.

Donkey Island Penitentiary are still rowdy and raucously rambunctious, however. ‘Tune In Next Time’ is a meeting of Blues-Rock n’ Roll and Punk attitude. Crunching and mid-tempo, the track is a cautionary tale against televised sedation. Musically, the band’s bass-axe is on top-form and leads it to being a release highlight. Specifically, I want you to crank up the volume between 1:36 and 2:32. Why? Because I said so. You will be far from disappointed.

‘Just For You’ is the jagged-stomping partner to ‘Tarantula’ and ‘Prison Break’ and is also the aptly titled track you’ve been expecting. Dated ’76-’77 Garage Punk ala The Clash promptly and refreshingly returns DIP to their Punk penchant. Although far more melodic and less gritty than most of the Punk strewn across the band’s back-catalogue, ‘Prison Break’ is another of their best.

‘Wake Up’ is warming and inviting via its seductive intro, however, the moment it has you, it is obvious that the band’s socio-political attitude and lyrical inspiration has followed you from post ‘Prison break’. Post-Apocalyptica and Blues-Rock n’ Roll have never been such a pair

The band close with ‘Heaven or Hell’. Falling back on what they are good at, Donkey Island Penitentiary embark on a sonic conquest of satan’s bastion. The band own hell and their dirty, bluesy, gritty Garage conditioned Punk-Rock n’ Roll is the sound of victory. Much like the rest of the release, Donkey Island Penitentiary have a way with their own influences. In ‘Heaven Or Hell’ they take the ubiquitous harmonica from the Blues, match that with the cathartic crisp energy of proto-Punk. They then naturally merge and combine this with the powerful simplicity of early Punk-Rock and the Rock n’ Roll abandon lacing it all together.

Donkey Island Penitentiary has intricately crafted this self-titled full-length in a manner that accurately allows them to bare all and I challenge you to not having a good time listening to it.