Debt Neglector and Dirty Water are set to appear this coming November. The Florida-born political Punk-Rock band are known for cutting the shit and for deposing the bullshit and smiling in the face of continual verbal diarrhoea. In a succinct nutty nutshell that has been NOWHERE near a sentient regressive arse-mouth, everything is shit and Punk-Rock is the soundtrack.

Earlier in 2020.1 Debt Neglector released the Bad Faith EP to tide us over until November. I implore you either go and listen to it now or bookmark it for after this review. For now, I’ve been lucky enough to receive the forthcoming second full-length album ahead of time. However, along with the EP denoted above, if you’re new to the band, you can find my review of 2018’s The Kids Are Pissed – Here. Debt Neglector and Dirty Water, let’s go!

I’ve always found the Debt Neglector-stamped Punk-Rock sound to be amidst a gritty, gruff yet melodic and politically resolute mire. A mire comparable in sound and otherwise to Dillinger Four, Banner Pilot, Bad Religion, Off With Their Heads and perhaps more. Pair this with a pervading ’90s melodic Punk and Pop-Punk-ism seamlessly permeating all of it and that’s ‘Dirty Water’. Is clean water (and the rest) really that much to ask for?

‘Anti-Trust’ is very much an epitome for how settled the band are on Dirty Water and is considerably more successful than the tracks wording at landing well and being heard. Track two accosts, laments and sardonically laughs at the effects of cronyism and allegiance-sold to an array of jabbing, spasmodic rhythms and drum patterns. Debt Neglector command attention with their short, sharp and abrasive Punk classicism with that lingering  “Gainesville” Post-Hardcore legacy and post-’90s singalong. The production quite simply put, stands tall on Dirty Water but two tracks in.

‘Cult Cult Cult’ was the second of the two forerunning singles. Three tackles unfettered capitalism and its brainwashing indoctrination, false idols and the implied need for us all to jet off on a giant penis rocket. Need I say more? Well, yes. The band’s previous adoration of The Clash is fully realised and fantastically present here. This Punk classicism is then supplanted in favour of yet another facet of the DN tirade. Skate Punk. ‘Space Case’ shows a side of the band not seen since 2018 and adds another flavour profile to this long-drink of existentialist liquid.

‘Tremors’ skillfully cuts across the album’s sonics thus far whilst ‘Least I Could Do’ markets more of the tempo ridden Punk perpetually poised to push to the front. Tracks five, six, seven and eight move away from the political focus and motion toward the personal. This is particularly the case with seven and eight navigating the darkness of modern mental health. Moreover, ‘Nothing Works’ specifically is the best of the band’s sardonic tone as a nervously smiling lead guitar meanders in a “fuck it”-fancy-free manner onward to more of the Post-Hardcore-isms so integral on Dirty Water.

‘Infection’ pertains to exactly what you think it does. COVID has altered everything and in places such as the band’s Florida home, there is plenty to sing about regarding it. And yet, ‘Infection’ is an anthem people will resonate with globally to a sad ease. Nine and the Skate Punk-injected ‘Eviction Notice’ mark some of the notable lead-guitar parts of the album and how they specifically contrast the fantastically abrasive rhythm section throughout Dirty Water. Debt Neglector know exactly what they are doing. ‘Sore Loser’ is a contender for being the best of the release in its 2020-centric statue eviscerating history lessons to the willfully incredulous. Well, that and racists. Mainly them. Let’s be honest. 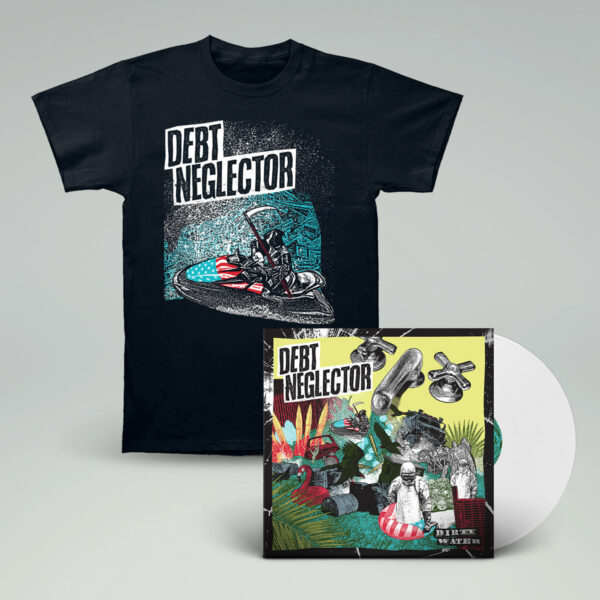 ‘Live Alert’ initially rumbles along past its acoustic strings unremarkably. However, in the Debt Neglector-way, it then imprints with confident ease and grows better with age and with each play. The band’s poignancy and layered Post-Hardcore and Hot Water Music-esque Punk then takes hold. ‘Business Is Booming’ pertains to a business doing very much that. – ‘Sit back and watch it all melt, one unsustainable hell’. The environment destabilising to a beat of capital acquisition. It is here that the perfect contrast of lead and rhythm section is in another melodious union impossible to negate, in yet another and suited contrast to the unrelenting and hoarse vocal tones.

Debt Neglector and Dirty Water end with the third and final track you’ll recognise from the Bad Faith EP. ‘Bad Faith’ is perhaps one of Debt Neglector’s best simply for its unfettered description of the US right-wing and their domestic terrorism. The idiots really are taking over.

Debt Negelctor are a political Punk-Rock band and Dirty Water is exactly what you’d expect from them in the best possible way. The Orlando band’s Punk is seamless on Dirty Water. They confidently traverse different wings of their previous work with welcome nuances on their already notable prominence. And that’s all I have to say about that.

Debt Neglector and Dirty Water. Smartpunk Records and SBÄM are handling this one. Find the band and pre-orders below.