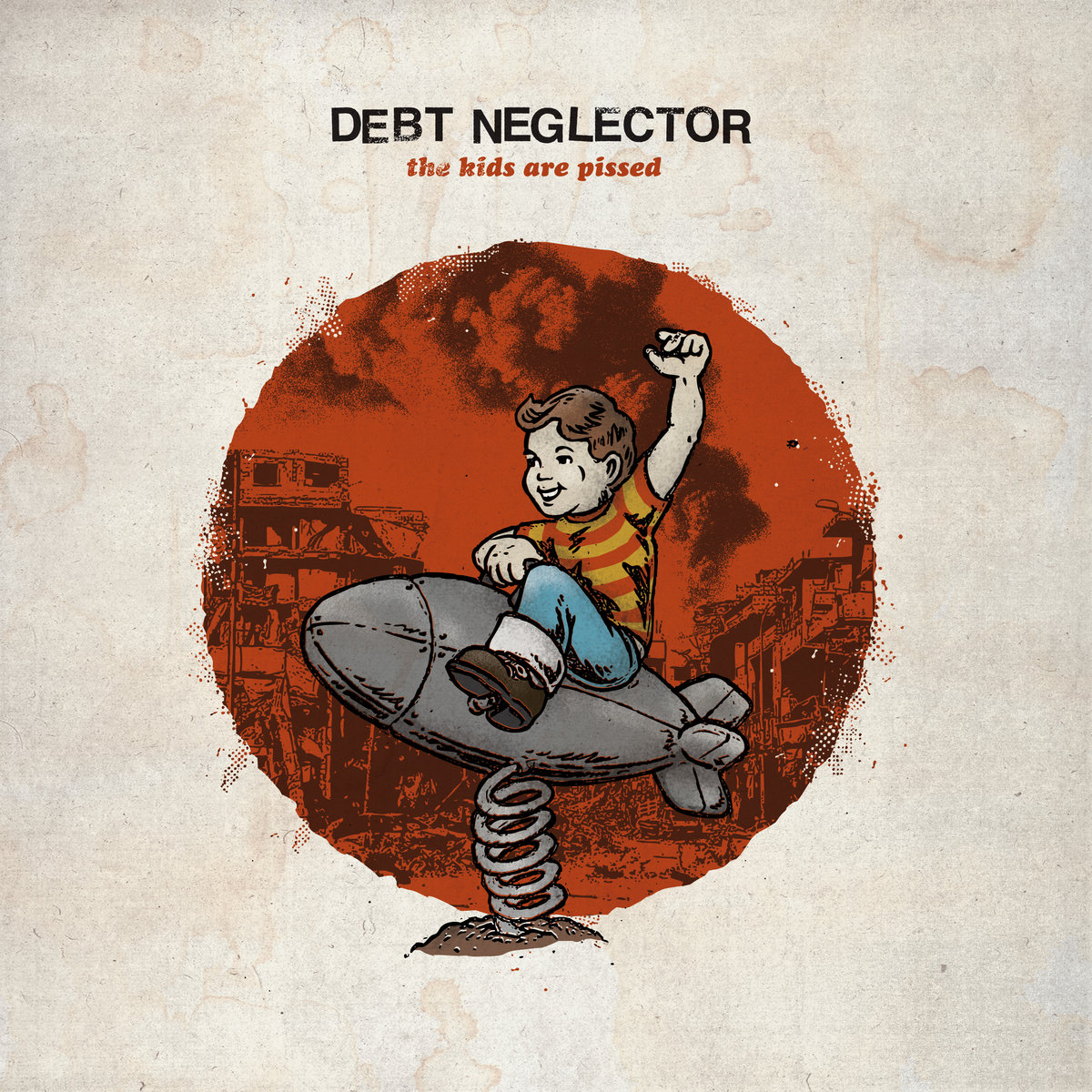 I feel I must place a disclaimer before this review. Despite this Floridian band hailing specifically from Orlando, coming across up-beat and as if they’re having fun, their fast, melodic yet gritty Punk-Rock packs a serious lyrical punch, crucial in these what-ever-the-hell-is-going-on times we sadly inhabit.

The Kids Are Pissed is the second release from the band and was released in conjunction with the excellent local label Smartpunk Records but more on that later, for the anti-Trump’s America and arguably anti-US in general cathartic release of ‘Scared Of U.S’ charges off into the not so distant distance via gruff-’90s-esque Punk-Rock. – ‘Whole goddamn world is scared of us, it’s not a game, and we feel the same! The whole goddamn world is scared – We’re so scared of us’.

‘Go Fund Yourselves’ would be funny if it wasn’t so horridly true. Debt Neglector are very much heart-on-their sleeve and opinion to mouth, so unashamedly so that that’s that and you can’t really utter much more on the subject. This second track is very stripped down, hard-edged Punk-Rock clearly taking influence from the masters of such an art, Dillinger Four.

‘Wrong Side’ takes is very much sonically the love child of it’s predecessors with an ever-so-slight penchant for classic Punk thrown in. Debt Neglector are instantly memorable across the board and The Kids Are Pissed is a release so sure of itself it could do absolutely whatever it wanted with you. I won’t say anymore because it’s before 9 pm – at least here anyway. ‘Wrong Side’ is intelligent, sardonic, sarcastic and a release highlight.

‘New White Roses’ crosses this slight classic Punk penchant with MxPx alongside a strong but again, playful political edge that does nothing but aid the resonation many will feel globally when listening to this track – ‘But I gotta give my thanks, to those that let me through the door – changed my opinion more and more’.

Skate Punk is the choice of medium for perhaps the most chilling and best track on the release. ‘R.P.F.O.’ is a very directed anthemic “we’ve had enough” to a damaging ideology that again, many sadly fall victim to in and out of the United States Of America. Punk-Rock is very much a go-to medium for those who very much live the household Punk message of Bad Religion‘s ‘Punk Rock Song’. Call it repetition on my part, but I really can’t express enough how on-point and nigh-on perfectly put across the message of Debt Neglector really is.

The band end with the releases’ eponymous track and if I’ve learned one thing, it’s that the kids are pissed, I’m pissed, thousands of us are and Debt Neglector have the EP to both ease, enrage and inspire.

The Kids Are Pissed is out now via the band and Smartpunk Records. And while you’re here – the band do an excellent cover of ‘I’m So Bored Of The USA’ by The Clash, which you can find – Here.

Diploma Return With ‘Love On Your Knees’.