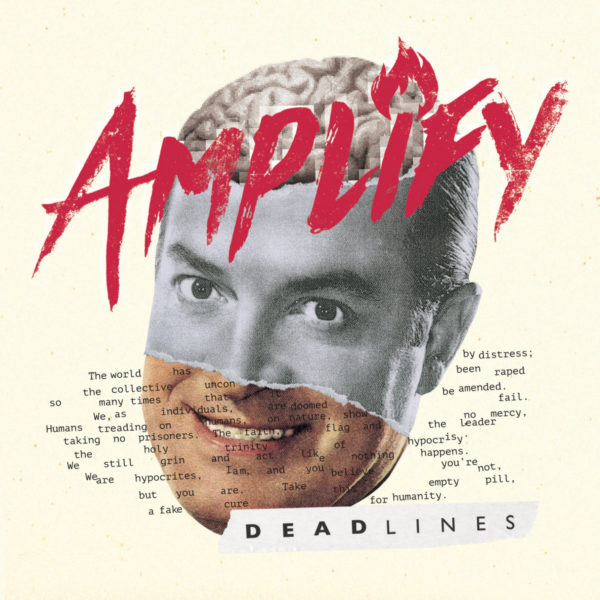 If your taste in music has simply existed on the periphery of European Skate Punk until now, then the words, Amplify – Deadlines are beckoning you to fully indulge. To indulge into a scene that has seen an exponential rise in both skill and blistering pace in these recent fast times.

Skate Punk has seen a huge shift towards the technical prowess of both Metal and Post-Hardcore in an endeavour to increase the stopping and staying power of those seminal OG stylistics. This is where Amplify are relevant. The band’s 2018 demo saw an emulation of the late ’90s fast-Punk influenced in part by the forerunning sound of the stalwarts NOFX and Lagwagon. Thick riffs, vocal harmonies and fuzzed-pop sensibilities were laid across three tracks brooding and aggressive at first, playfully upbeat at the midpoint and anthemic at the end.

2019 saw the eight-track Deadlines. Opening with a tributary mid-to-late NOFX-esque lead alongside shredding rhythms, it’s not long before hints towards Melodic Hardcore are intermittently screamed in your very specific direction. – ‘Still breeding idiots, in a nutshell, after 40 years – we don’t learn, we won’t learn’.

‘The Church Of Shame’ has that familiar bass rumble and fast drumbeat that melodic Punk fans will know marks the two-stage intro of an anthemic powerhouse. You can find it in our house Skate Punk playlist – Here. Amplify seamlessly shift from the jagged past to the increasingly jagged time of the now. The band will soon be playing with Adrenalized and its easy to see why.

‘Dumbs Up’ glides by like the upbeat Punk song that it is and maintains the Amplify-grade Skate Punk on offer. ‘Dumbs Up’ improves on what made the demo so notable. The track may not quite match the standout predecessor but certainly keeps the beat from ebbing away. That said, the interweaving, intertwining guitar-lines serve as attention maintaining puppet-like strings throughout.

Thick vintage-Melodic Hardcore is far more exclusive to the Amplify of this release. ‘Illogical Reason’ crosses such in the vein of No Trigger with the charged Pop-Punk-sensibilities of mid-’90s Skate Punk mixing well enough. Although ultimately it leaves you yearning for far more despite the excellent melodic Skate Punk on offer.

As I react to this release, it is almost as if it heard me. ‘Fancy Fence’ answers the Melodic Hardcore call as Amplify’s Skate Punk crosses the oh-so fine line between the two. ‘Rich Kids On Stupid Attitudes’ employs forebodingly anthemic layers before an ensuing shred-fest.  – ‘Wake up! Subculture is drowning! We divide ourselves, as the profits are growing’.

As Deadlines reaches its own deadline. Amplify’s socio-political rage only boils and boils. The band’s sound regardless of any genre-crossing, on the whole, purveys far more punch and gusto in a natural and cathartic response to itself. ‘Rich Kids […]’ and ‘The Hand That Hits’ couldn’t embody such intrinsic conviction more.

Admittedly, clarity issues are a small plague on the band’s sound but ultimately fade into critical obscurity. ‘Separation’ closes in a manner pleasing to fans of Straightline and personally for me leans towards the sound of the 2013 Final Redemption. ‘Separation’ falls back on the anthemic Punk-shredding of the golden age of the fast melodic-Punk stylistic. The final number is as cathartic as its forebears but is clearly born from as much deep and inward emotion as it evokes. Find it another playlist – Here.