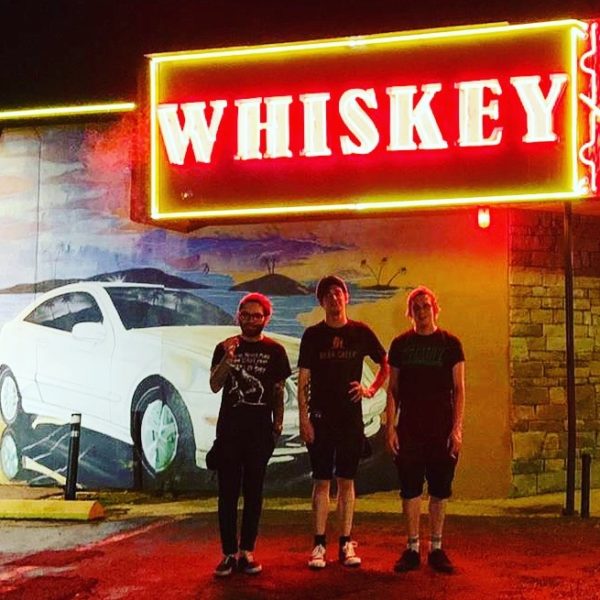 Introducing Good Friend. Why now when they haven’t released music since 2016? Well, firstly the band are still together, have been touring across Europe and the US alongside the likes of MakeWar, The Copyrights and Brendan Kelly and obviously because music is eternal. However, relevant to 2020, the band will be releasing a new 7″ later this year via both Red Scare Industries and Gunner Records. As good news as that is, what of the band’s music to date? What of their sound and what of Ride The Storm.

This is to be another of those pieces that will endeavour to describe Good Friend in manner that will entice those ears of yours. And so, “Introducing: Good Friend”.

Despite the majority of the band residing in Newcastle in the English north-east, they are split between this very locale and their ancestral home in the land of Northern Ireland, which is something directly hinted throughout their debut Riding The Storm. Alongside just a few references at treacherous sea voyages that is.

The band boast a brand of gruff-yet-melodic and determined majoritively upbeat Punk laced with thick, equally gritty Alternative Rock. Key names such as Red City Radio, The Flatliners, Lawrence Arms, Moonraker, the early-mid-career (The) Menzingers and Nothington come to mind as you move through the tracklist of Riding The Storm. ‘Rock Bottom Revival’ crashes through mid-paced Punk with a need to get out of the gutter after siren-like big lights led the way. Good Friend are another within the vein of Gruff-Punk music that wear their hearts open and embrace their weaknesses before harnessing them. Tracks such as the downward spiral of ‘D.L.B.’ self-loathe and provide contrary emotional trajectory as the band’s ability to solicit resonation is effortless.

Despite a prevailing, mid-paced Alt. Rock influence, Good Friend push-harder, cathartic Punk in that of  ‘Overloading The Limiter’, where comparatively intense vocals ride a looming melodic lead as it builds toward classic grit. The band’s tendency to first juxtapose their melody and onset grit and then splice them together is also a major selling point. On par with the above, ‘The Curious Case of Hy-Brasil’ is the perfect and intrinsic example of this inherent ability. ‘The Return Of Fionna and The Fianna’ moves from a moody-ebb of lacing guitar-lines and down-trodden to disdain-imbued vocals to an eventual riff-led collapse into abject negative reflection.

Good Friend are emotionally evocative. Their Punk and Alt. Rock hybridisation, with their pure and unrefined inner-feeling, makes for a dynamic entry into this realm of all-heart Punk-Rock. See ‘Curse The Name’ for another intrinsic example of such beset with perpetually circling build-ups from the kit, whirling, cutting crescendos and strained dynamically diverse vocals denoting to one of the band’s best tracks.

For all the self-reflection, introspection and extrapolation of what troubles them, unforgivingly blasted at you via thick enveloping anger, sadness and regret ala this wing of Punk, Good Friend counter it just as easily. The band’s displays beckon you upon both down and upbeat croons, completely negating the risk of complacent releases. ‘Young Blood’ and ‘Daniel O’ D and The Moonshiners’ sing, lament and challenge the same life-Punk issues and approaches. Yet, despite their struggle, they still ear-worm themselves down your canal just as easily. In fact, the latter of the two marks some of the best of the Good Friend bunch. Track eight sardonically moves through the motions of modern-day-worry-encumbered drudgery; warts, bills, TV-screens, politicians and all. – ‘Never seem to catch a minute never seem to catch our breath‘.

Good Friend are a band that deserve your attention. The three-piece’s intelligent songwriting and varied approach to a wing of Punk often traversing the same roads is refreshing yet anchored to what makes the stylistic return successfully again and again.

That was “Introducing: Good Friend”. Hopefully, you’ll indulge and make my incessant waffle worth it.